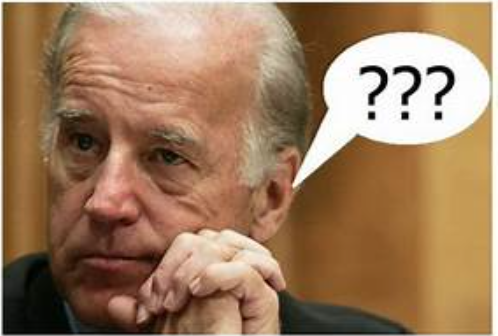 The Mole came out of his hole today, saw his shadow … Oh wait, wrong movie. Joe Biden came out of his basement, and while I don’t know whether he saw his own shadow, he did see Trump.

For the first time since the virus reached pandemic status, Donald Trump went for a round of golf over the Memorial Day weekend. Reason enough to earn Biden’s frantic criticism.

Biden neglected to mention he’d been locked pretty much non-stop in his own basement for 10 weeks. Pretty much the only thing Biden’s accomplished in all that time was giving comedians adequate material for at least an hour routine focusing on Biden’s gaffs.

Biden also failed to admit that when he and Obama were running things, and the N1H1 flu killed 17,000 Americans, about all Obama did was play golf rather than address the flu contagion.

Predictably, Trump fired back with a pair of Twitter posts of his own.

“Sleepy Joe’s representatives have just put out an ad saying that I went to play golf (exercise) today.”  Trump added that doctors recommend even the most severely “locked down” get regular exercise.

Then Trump continued, “What they didn’t say is that … Biden was constantly vacationing, relaxing & making shady deals with other countries, & that Barack was always playing golf, doing much of his traveling in a fume spewing 747 to play golf in Hawaii”

Trump also reminded the Twitter world of the time Obama teed off immediately after telling the parents of James Foley, who was murdered by ISIS terrorists, how “heartbroken” he was.  Obama promised Foley’s parents he’d “be relentless” in hunting down Islamic radicals.  Then, as soon as the cameras were turned off, Obama played 18 holes at his favorite golf course in Martha’s Vineyard.

In his criticisms, Joe also forget to mention the hard work Trump has done to balance the fight against the Wuhan Virus with the need to reopen our economy and save Americans’ jobs.

As proof that Trump is doing what needs doing, former Obama economic advisor and Harvard professor, Jason Furman, told Democrats at a big hush-hush meeting recently that the U.S. is about to see the “best economic data” in its history.  Biden didn’t mention that either.

According to the D.C. newspaper, Politico, “Instead of forecasting a prolonged depression-level economic catastrophe, Furman laid out a detailed case for why the months preceding the November election could offer Trump the chance to brag — truthfully — about the most explosive monthly employment numbers and GDP growth ever.”  According to Politico, “Furman’s counterintuitive pitch has caused some Democrats, especially Obama alumni, around Washington to panic.”

Biden also predicted that he was certain to beat Joe Biden. What? You heard that right. I’m not sure how Joe will beat Joe, but with continuing gaffs like that it’s not quite as idiotic a prediction as it sounds.

Normally, even if we like the incumbent, a decent challenger will give us some reason to pause and take a look; window shop, if you will. For me, it’s impossible to see anything in Biden that’s worth the time to stop at his window.

Considering the fragile condition of the world, and particularly our own country’s health and economic situation, why would we consider turning the reigns over to a 4 time loser?  Especially one that lies constantly, overstates his qualifications for office regularly, and can’t seem to string more than 2 cogent sentences together ever.

While Joe may not merit much consideration, those propping him up from behind do.

Alexandria Ocasio-Cortez has been promised a job heading up America’s climate efforts under President Biden.  That means trillions for the “Green New Deal,” money we don’t have and can’t afford, especially after the trillions spent to help those impacted by the Chinese Pandemic.  Taxpayers ought to be running for the hills at the mere thought AOC might be in charge of something.

Then there’s Beto O’Rourke, who Biden has tapped to trash the 2nd Amendment. In plan English, Biden has put O’Rourke in charge of confiscating Americans’ guns. YIKES!!

The most important question is still, who will be Biden’s running mate?

Biden’s already committed to choosing a woman. For the record, I’m fine with that. But how in the world can you take a pool of roughly 100 million possibles and pare it down to these 5 or 6 improbables? Most are so far left they give looney a bad name.

There’s the socialist who was repeatedly caught in outright lies during the primary, Liz Warren.

Then we have Kamala Harris.  She didn’t win a single delegate in her presidential run. She called Biden a racist.  And now, she’s introduced a resolution in the Senate that makes it a hate crime if you call the Chinese Virus, “the Chinese Virus.” In fairness, her resolution also makes calling it the “Wuhan Virus” or the “Kung Flu” hate crimes as well.

The current governor of Michigan, Gretchen Whitmer, is another possible candidate for VP. She’s been so arbitrary and petty in her draconian lockdown orders it wouldn’t surprise if Michiganders took up a petition to bring Nicolas Maduro up from Venezuela to replace her.

Over Memorial Day weekend, Whitmer’s husband called the marina where his boat is stored and tried to intimidate the manager into dropping his boat in the water before those who already had reservations. This happened the same day Whitmer told everyone else in Michigan they could not go to the popular tourist destination to visit or boat unless they already lived there.  She and her husband live 200 miles away.

If Biden wants a VP as hypocritical as he is, then Whitmer is a good choice.  What am I saying? If that’s the main quality he’s looking for, he can pick from Democrat office holders, celebrities, and media personalities galore!

Since Joe’s hypocrisy in criticizing Trump for doing what he and Obama did, but less of it, is where we started this column, it’s probably a good place to end it.

Beware the criticism from Democrats targeting Trump. From everything I’ve seen these last few years; their attacks are almost always untrue, are universally posed in near hysterical hyperbole, and most often reveal far more about the deficiencies of those making the allegations than they do about Trump’s.