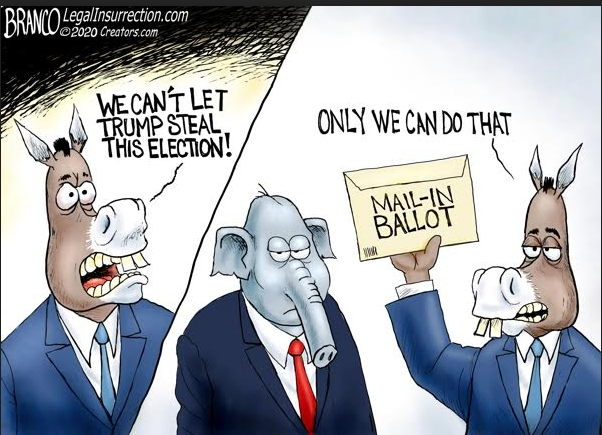 We read so many unbelievable things done by our ruling elites, we’re no longer surprised. We count them as ordinary.

Bill Maher regularly tells his television audience he hopes the economy fails so Trump won’t win re-election. Whoa. What American in his right mind hopes for the destruction of the strongest economy in the world and the suffering of millions of Americans?

Then there is the Chicago Mayor. She says she thinks we ought to replace the pledge allegiance with a new pledge to the New World Order. This is the same woman who got a haircut after ordering no one in her city could get a haircut. Sadly, that kind of hypocrisy among politicians is common. But pledging to a one world government? Why would anyone elect someone like that?

Then there are members of Congress like AOC who suggests seniors should die so they don’t deplete Social Security before her generation gets their share.

Congress’ queen bee, Speaker Nancy Pelosi, just forced through a $3 trillion bill she calls urgent Covid-19 relief. Except almost none of the money goes to help those impacted by the coronavirus. Pelosi also seems to think this whole pandemic thing shouldn’t be allowed to create a hiccup in our otherwise cozy relationship with China.

Then there’s the almost pathological duplicity of Democrats who claimed during the Kavanaugh nomination that all women must be believed, no matter how unbelievable; and their utter rejection of Tara Reade’s allegations against Joe Biden.

When did it become ok to sacrifice truth and decency for political power? When did grabbing political control become a higher value than the welfare of the American people?

In the Democrat’s 1,800 page “Covid Relief” bill, illegal immigrants are mentioned 100 times.  To the best of my knowledge, the word “jobs” is barely mentioned at all.

Nearly $1 trillion of the $3 trillion Democrat plan bails out high-tax blue states that are near bankrupt as a result of signing sweetheart pension deals with government employee unions.

In California, Illinois, New York, New Jersey, Pennsylvania, Connecticut, and Massachusetts; public employees are almost guaranteed to retire as millionaires after 20 years on the job thanks to mismanagement by blue-state politicians. They also spend billions to educate, feed, house, and provide health care for illegal immigrants.  Pelosi thinks red-state taxpayers should pay the tab.

Democrats have two objectives. First, cause Americans to blame Trump. Second, find a way to rid themselves of Biden’s liabilities as a candidate. They reason that Biden’s flaws will pale compared to an economy on the skids. Biden can only be competitive if Trump is forced to defend massive economic suffering.

We’re all aware of what Democrats have done publicly to investigate, impeach, and harass Donald Trump. Now, new revelations emerge daily of Democrat’s using the highest powers of America’s law enforcement, intelligence agencies, and deep state operatives to overturn the 2016 election and conduct a coup.

Whether you like Donald Trump or hate him, it’s hard to justify the lengths to which Democrats have gone to overthrow an American election—including plunging millions into despair and misery; breaking countless laws; and engaging in inestimable levels of deceit, hypocrisy, and ugliness.

Democrat leaders are disgracing themselves, and they’re disgracing the country they are supposed to serve. They’ve made us so accustomed to their corruption and hypocrisy, we’re no longer surprised by it. We’ve come to accept it as ordinary.

The only way we’ll be shaken awake is if those responsible are held accountable, and those who have broken the law are prosecuted and put in prison.

Even During a Pandemic, Leftists Trying to Control People Via Their Guns

Dr. Jamie Glazov: The Gloating of the Mask-Wearers