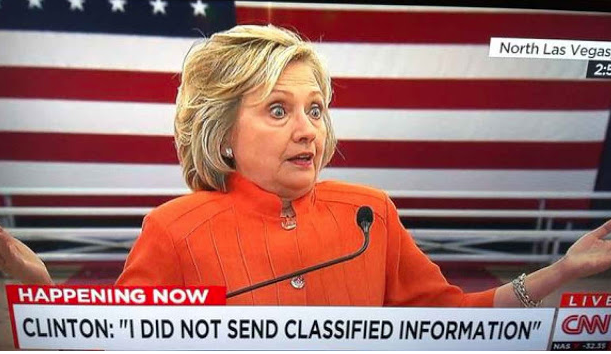 The Manchurian Candidate asked what if the biggest proponent of a Russian conspiracy is a Russian asset. The scenario may have been fictional in 1962, but the Democrats made it real in 2016.

After four years of smears, lies, and posters of Trump and Putin making out, we now know that the Steele dossier, the basis for the entire Russia conspiracy theory, was Russian disinformation.

And we know that the Hillary allies inside the FBI knew that it was Russian disinformation.

A declassified footnote from Inspector General Horowitz’ FISA report reveal that Team Coup was well aware that they were potentially playing with Russian disinformation.

It’s not clear why the latter would be classified if it’s a reference to Christopher Steele: the ex-spook hired through cutouts to produce the Russia conspiracy theory for the Clinton campaign. Unless the reference is to Steele’s real source. RIS would be a reference to Russian Intelligence Services.

Steele wasn’t just a hatchet man hired by Fusion GPS to produce opposition research for the Clinton campaign. He had been selected because he was a trusted FBI source and whatever he produced would then be used by Hillary allies and Fusion GPS to generate an FBI investigation of the Trump campaign.

Hillary’s allies in the campaign and the FBI weren’t interested where Steele was getting his information. And even when the Crossfire Hurricane team learned that it might be a hostile power, they didn’t care because they no longer saw Russia as the enemy: Trump was the enemy they were going to destroy.

How was Christopher Steele able build his private intelligence network without a country behind him?

Steele’s network appeared to be drawn from Russian oligarchs. The oligarch in post-Communist oligarchies like Russia and China often acts as a front for government authorities, running former state industries and partnering with foreign companies while holding the secret wealth of the leadership. Oligarchs are privileged, but also threatened because they’re the brokers of the dirty business of the regime, and maintain a balancing act, buying homes abroad and sending their children to the West.

The UK is a favorite destination for Russian oligarchs and Steele might have believed that they wanted an influential fellow like him to owe them some favors in case they fell out of favor with Putin. But why would any truly significant players put their lives and fortunes at risk to pass intel on to an ex-spook? Steele’s informants were much more likely stringing him along on behalf of the Russian spooks.

Steele wasn’t playing the Russians. The Russians were playing him. His informants were double agents.

Every time Steele went hunting for information, Moscow gained insight into what the people paying him were interested in. Steele wasn’t passing information from Russian sources to his clients. He was telling Moscow what information about Russia his clients, Fusion GPS or the FBI, were searching for. And enabling the Russians to decide what disinformation they wanted to use Steele to spread around.

Beyond Trump and Crossfire Hurricane, the footnote indicates that Steele’s tainted network may have been compromised and was feeding Russian disinformation to the FBI. When Steele was tasked with assembling material on Trump for the Clinton campaign and the FBI, he reached out to a network of confidential sources and found Russian intelligence officers eager to exploit this intriguing scenario.

What would a hostile foreign power do when an operative for one of its political opponents comes looking for proof that its rival is secretly working for them? Exactly what the Russians did. Provide confirmation, but taint it. The Steele dossier contained numerous basic errors. No genuine expert on Russia could have produced it. But Steele treated it all as raw intelligence to be passed along.

And if no one on the Clinton campaign or at the FBI bothered to verify it, that was their problem.

Plausible disinformation would have just tainted Trump. But the Russians wanted to taint everyone. Especially their opposite numbers in the FBI. And partisan corruption on our side let them do it.

The Russians had compromised Steele and through him the FBI and the Clinton campaign.

And then they burned everyone.

Stringing along Steele had paid off for Moscow in a very unexpected way. After generations of effort, the Russians seriously damaged our political system and intelligence agencies. They transformed the image of their own faltering regime, trying to figure out how to squeeze the last ruble out of its energy assets, into a superpower that could determine the outcome of American elections with its spycraft.

And, as in the Cold War, they didn’t have to do any of the hard work. Their lefty allies did it for them.

After building up Steele’s worthless dossier into an FBI investigation of the next POTUS, a pittance in Facebook ads, most of which post-dated the election, were turned into proof of a rigged election.

All the Russians really did was inject disinformation, not into social media, but the media, and into the Clinton campaign. The Democrats built up the disinformation, spread it around, and weaponized it. Their agenda was to hurt Trump, but the Russian agenda was, as with any hostile power, to divide America.

What the Russians really wanted was to weaken whoever won in 2016. Steele was their useful idiot. Once Steele had passed on the disinformation, the Democrats and their media allies went to work weakening the country, accusing Republicans of working for Moscow, when they were the ones tearing apart the country and undermining the President of the United States using Russian disinformation.

Trump Derangement Syndrome allowed the Russians to subvert Democrats and elements of the FBI.

The louder the Democrats and the media spread the false claim that President Trump was being controlled by Moscow, the more they could obscure the reality that Moscow was controlling them.

As in the Manchurian Candidate, the Russian assets were shouting the loudest about Russia.

But who else would be so invested in building up the myth of an omnipotent Putin and a mighty Russia? The idea that Russia could determine the outcome of American elections was Russian disinformation.

There had already been strong suspicions that the Steele dossier was Russian disinformation. Even Christopher Steele refused to deny speculation that this might be the case. But footnote 350 reveals that Crossfire Hurricane’s counter-intelligence investigation was well aware of it.

The Russia Hoax was not just a deep corruption of the DOJ and the FBI by Obama and Clinton Democrats. It was also a profound counter-intelligence failure that allowed the Russians to exploit that corruption. Had the FBI done its job in a non-partisan manner, it would have deterred Russian efforts to plant disinformation, whether in the crude form of leaked emails, or the sophisticated form of opposition research, instead partisan figures like McCabe and Strzok put party ahead of country.

Vladimir Putin got what he wanted, not from President Trump, but from his Democrat enemies.

Moscow had not seriously thought that its operatives, whether at the Internet Research Agency, WikiLeaks, or whoever was feeding Steele stories about urine-soaked hotel rooms, while trying not to giggle, were ever going to determine the outcome of the 2016 election. What it wanted was to weaken the winner, whether in the Democrat and Republican primaries, or the general election.

And throughout this process, Democrats and Never Trumpers made the best useful idiots.

Hostile foreign powers don’t limit their hostility to Republicans or Democrats. Only useful idiots think that they do. And idiots are useful when they allow a hostile foreign power to divide and conquer, militarily or politically, weakening it through internecine warfare so that it is unable to interfere.

$100,000 in Russian Facebook ads didn’t taint our election. The $100 million in media programming falsely claiming that the election was tainted did that. The disinformation spread by Democrats and their media allies weakened this country, destroyed the credibility of the FBI, and undermined President Trump. That is exactly what Moscow wanted. And what the Democrats and their allies gave Moscow.

What the declassified footnote reveals is that this was not an unintentional treason. They knew.