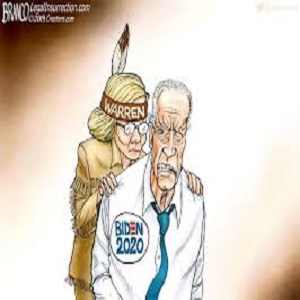 Some wise sage once suggested, “If you don’t know what you do want, start by avoiding what you don’t want.” It’s advice Joe Biden does not seem to be interested in taking as he rummages for a running mate. As we’ve seen so often with ole’ Joe on other issues, when it comes to choosing a running mate, he’s a bit fuzzy on what he wants. And yet he seems intent on choosing what he certainly does NOT want, or shouldn’t want, and that’s someone who will cost him votes.

In an eruption of blatant pandering, Biden promised at his last debate he’d choose ONLY a woman as his running mate. For Democrats gone dreamy over Andrew Cuomo’s coronavirus-induced national popularity, that’s unfortunate. Still, it leaves nearly 89 million potential candidates across the country — only 45 million or so if he insists on choosing a Democrat. With that many prospects, you’d think his list would represent a wide variety of beliefs, backgrounds, and experience. It doesn’t.

There are only 9 or 10 women being seriously considered. And they all pretty much line up the same – at least on what matters most. They’re all far left liberals with little or no understanding of what makes our economy tick. As a result, each will cost him votes.

First is Michelle Obama. Joe said he’d select her in a “heartbeat” if she’d take it. Lucky for Joe, she says she’s not interested. Until her husband was elected president, she said she’d never been proud of her country before. When she ran the school lunch program as First Lady, the USDA imposed fines on schools for not following her lunch rules. Kids were so put off by her menu most of the millions taxpayers spent on school lunches ended up in school trash cans. Then she was caught citing a phony study that claimed her program caused a massive drop in childhood obesity. It didn’t. And don’t forget the luxury vacation travel Michelle billed taxpayers while she was First Lady — tens of millions of dollars including $41,000 in travel while she campaigned for Hillary Clinton.

If she is elected on a Biden-Abrams ticket, voters could expect her to be as hopelessly lost in the the executive branch as Joe Biden. At least Biden has old age to blame. With Abrams, it’ll be a total lack of executive or management experience. Should Biden’s age get the better of him, putting aside claims it already has, it’s hard to believe taxpayers would welcome Abrams’ management of the $2 trillion per year federal government. Scary.

The notoriously partisan, and far left, junior Senator from California, Kamala Harris, is currently the top contender for the job according to those in the know. Other than winning zero delegates in the Democrat presidential primary, Harris is mainly known for her hateful treatment of Judge Kavanaugh during his Senate confirmation hearings. In those hearings, Senator Harris demanded that “we believe the woman,” then she used her hysterical rants against Kavanaugh to build a million person data base to aid her run for President. Apparently, she doesn’t feel the same way when the allegations are against a Democrat. When Tara Reade accused Joe Biden of sexual assault, and asked for help from her U.S. Senator, Kamala Harris, she got no response.

I suppose one expects duplicity and hypocrisy from our elected officials these days. We’ve come to expect them to smear good people and ruin careers when it’s in their own, or their party’s, political interest. But, in a way, that acceptance is even worse than their behavior. We should be ashamed we accept such conduct from those we entrust with our votes and our country. Kamala Harris’ big moment as a candidate for President was when she accused Biden of opposing school busing back in the 70’s, thereby denying her the right to a good education. Then it came out that Harris was raised in a middle-class family in Berkeley and, upon entering politics, had also opposed school busing.

It’s ironic Biden is now seriously considering Harris as running-mate material given she dropped out before winning a single delegate. But then, she’s still popular with the far left for her support of massive increases in welfare, a $3 trillion Green New Deal, huge taxes on job creators, opening our borders, and free health care.

Given that Joe doesn’t know exactly what he wants, and seems intent on pursuing what he doesn’t, or shouldn’t want —a far-left running mate who will cost him votes — why not the ultimate favorite of the far left — Alexandria Ocasio Cortez? AOC recently tweeted how thrilling it was that the oil industry in America had virtually collapsed due to recent “stay at home” orders. So far, troubles in America’s oil patch have cost 200,000 working families their livelihoods with another 1 million more expected in the next 30 days. You’ll remember as well it was AOC who caused Amazon to cancel their plans to locate an east coast HQ and 25,000 new employees in her district — 25,000 new jobs that could all be working from their homes right now, supporting the economy in her Congressional District, but for AOC’s relentless and dishonest campaign against greedy corporations.

On the other hand, maybe Joe will want to cast the net a bit wider and include for consideration a few more of those 45 million or so available prospects. He’ll have to do so if he has any chance of finding a candidate who has worked as hard to help the American people as our honest, patriotic, and decent incumbent Vice President, Mike Pence.

Anne-Marie Waters: Coronavirus and the Dire Threat of China

Barak Lurie: War Against Corona - The Opposite Of War