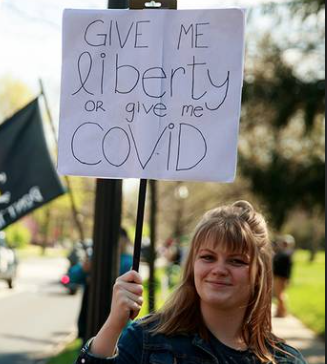 “Crimson autograph is what we leave behind”-Graham Parker, Don’t Ask Me Questions

I wrote about my decision to practice stay-at-home social distancing in the March 2019 Politichicks article, “Notes From the Viral Underground.”  At the time I wrote the article, my wife and I had decided that it would be better for me to remain at home.  Away from the day job at a grocery store, away from the night job as a musician.  Our health history places us both at risk.  Simply, I did not want to get the coronavirus and I do not want to get anyone else sick. Think globally, act locally.

But after a few weeks of this isolation, I am starting to feel uneasy.  Social distancing, in the hands of various government officials, has started to resemble a form of social control.  A form of control where  fear of the virus is used as a weapon of control.  A weapon used by  government. A weapon that also arms and feeds the globalist media.  My concerns seem to be shared by many of my fellow Americans.

In the tradition established by our forefathers, Americans are starting to hit the streets in appropriate measures of civil disobedience.  America is a social country with close knit connections.  We are starting to raise our voices in an active protest against this government applied isolation.  In the midst of our social distancing we can also raise our voices in social protest.

Take Michigan for example. To be specific, Lansing Michigan, the state capital.  On March 10th, Governor Gretchen Whitmer issued a Stay-At-Home order that is draconian in it’s tenets.  Preventing visits to friends or any travel whatsoever until May 1. With a swipe of her pen she has crippled  the economy of the state.  On April 15, 2019, thousands of Michigan residents descended on the Capitol.

They were honking the horns of their vehicles as they circled the capitol.  Hundreds of citizens gathered on the lawn.  Similar protests have recently occurred in other states, Texas, California, Ohio, and North Carolina, among others.

I reside in the State of North Carolina where there were protests at the State Capitol on April 21st. On that day, one woman  was arrested for violating North Carolina’s Stay-At-Home order. Are you kidding me?

Where is the law where social distancing eliminates the right to peacefully protest?  Any municipal or government official that has someone arrested for protesting may want to reread the Constitution.  I believe this was a violation of the Constitutional rights of the arrested individual.

As of April 23rd, North Carolina Governor, Roy Cooper, has extended the North Carolina Stay-At-Home order date to May 8th as he states there have been an increase in deaths related to the virus.  In the end it will be the people that decide when they go back to work.

America, can you hear me now? To reiterate, we need to not forget that many State and Federal officials are starting to use social distancing as a form of social control. To paraphrase a previously written statement of mine, they are disguising tyranny so that it will resemble safety.

I respect President Trump’s appropriate practice of allowing states to determine their own destiny in the midst of this pandemic.  I also believe in states rights.

But some Governors have demonstrated themselves to be unworthy of that authority. They have imposed strict rules restricting what people are allowed to purchase in stores that are already open for business. That is a senseless abuse of power.

How we stand up to evil and tyranny is the crimson autograph of what we leave behind. It is the evidence of our intelligence and our shared humanity. That may be our ultimate individual legacy in the face of tyranny.

This is not the time to remain silent in our homes.

We must protest against the unreasonable government response to this pandemic. You can raise your voice at home, on-line, on the phone, or when able, in the streets.

Bow your head in prayer and protest, as God knows what ultimate justice is. The  people are his church.

We will get through this and our country will remain strong. In the aftermath of this pandemic, it will be time to establish an atmosphere of accountability. Whether that investigation includes China or our own country, let the masks fall where they may.