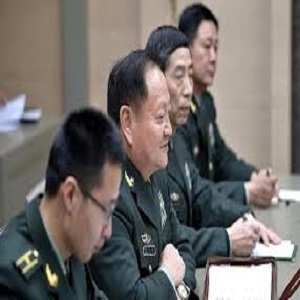 President Trump is right, we are at war with an invisible enemy. Actually two enemies. The first is the Wuhan Virus. But the other enemy is only invisible because the three presidents before Donald Trump didn’t see it. It’s the People’s Republic of China. And if this isn’t a direct biological attack by China, then it’s very possibly a dry run.

How did we get here? Presidents Bush, Clinton, and Obama never faced the threat. In fact, they allowed America’s supply chain for everything from steel to medicine to become increasingly tied to Chinese manufacturing. Then Donald Trump won the election at least partly on a platform of trade reform with China and all their hopes for increased American dependence on cheap Chinese labor were annihilated. Under Obama-Biden, China could get away with damn near anything. They knew the U.S. would do nothing except complain to the U.N. You can imagine how that worked out. YAWN!

So all the Obama-Biden squishes were shocked when Donald Trump won the election and started actually holding China’s feet to the fire. On trade, on technology, on intellectual property, on currency manipulation. Trump renegotiated our trade agreements to make them more fair with China and others. And when those countries refused to negotiate in good faith, he lodged tariffs on their products. He reduced regulations and taxes on American job creators to make them more competitive. He showed Americans, and the rest of the world, he wasn’t messing around.

After a number of false starts, China signed the Phase 1 Trade Act with the U.S. Only a week later, we started hearing about a new virus infecting people in Wuhan province. But we didn’t hear it from the authorities in China, not at first. At first we heard it from rumors, then underground reports, then finally from local health officials. Even then though, the reports were incomplete and we found out later, many times untrue. The above is fact. I can only speculate about the rest.

Only a block or two from a chemical laboratory in Wuhan Provence is where the first case was reported. Some claim it started at the lab. Others say it resulted from people eating bats. The Chinese government isn’t talking. Neither will the Chinese government allow American scientists to investigate. Likewise, China has been reluctant to give us or the world verifiable data that might help everyone else combat the virus.

While we absolutely can not trust anything they tell us, China has claimed the number of those contracting the virus there is falling, even while the patient load in the U.S., Iran, Europe, the U.K and elsewhere expands. Many scientists doubt the validity of China’s assertions. China is watching us with an eagle eye … as our economy staggers … as Democrats and the media ravage Trump with phony charges … as the aircraft carrier USS Theodore Roosevelt docks because its sailors suffer from the Wuhan Virus – and many other ships in our fleet are sure to follow — China is watching.

Stocks are off by 25% to 30%. Some think trading may be suspended. And China watches. Maybe this really is an attack, maybe it’s not. It could be a dry run for something worse to come. But if the Chinese had purposefully decided to wage a biological war against us it’s hard to imagine them doing more damage than with this pandemic. Our economy is little more than a warm shadow of what it was just a month ago. Our military is hobbled. Our economy is close to chaos. We’re thoroughly vulnerable to attack.

The Coronavirus, the Democrat Grasshopper, and Republican Ant