On January 31st, 2020, the Secretary of health and human service announced travel restrictions, which took effect on that Sunday evening; it was declared that the coronavirus 19 posed “a public health emergency in the United States.”

The toll on our country, family, and friends have been traumatic, but nothing as it has been for our healthcare professionals, the echo of the unsung hero. The harrowing cost to the United States of a politically delayed response by the Democrats. The global World Health Organization looks to provide a safe harbor–for China. Democrat leaders like Joe Biden and his son who works very closely and has profited by China remained quiet while our country was battered by this silent killer #COVID19. 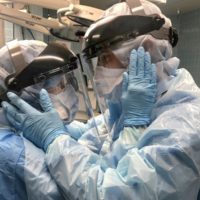 overworked and increasingly vulnerable, even as they became the nexus between a frightened public and a misdirected government using the virus as a maneuver to distract our President Trump. As a global medical pandemic emerged, a great medical revolutionary action rapidly took place in a matter of days. All of our skilled healthcare professionals (Doctors, Nurses, Scientists, etc….), and Police, Firemen, Army Corp, FEMA, and our military personnel ramped up into action that only rivaled by a scale as massive as a World War viral battle against the United States.

It was not just the doctors and nurses medical knowledge, but their understanding and compassion that ignited patients to bounce back in instances of nothing short than miracles; both nurses, doctors and our entire field of front line warriors have had to stay away from their own safe circles, the people they love.

Amidst this battle of relentless infections and death, the overworked and fatigued on an unyielding virus it’s these sacrifices unending in numbers that enable recovery for the millions who were and are affected by the disease. The warriors put their greatest professional spirits forward and continue to work hard to save a life, at work and beyond their tales are meaningful with sacrificial anecdotes.

Undoubtedly, their bravery often going beyond expectations is what instills hope and faith in millions who live in fear of this virus, a plague on humanity. It is a lonely and isolated life for these doctors and nurses; they fear that their young children and aged parents would unnecessarily be put in a vulnerable position if they were to return home after an exhausting arduous shift. An added burden comes in the form of the perception that people who watch them going about in their daily life alienate them and consider these #healthcareheroes – Ambassadors of life to carry a deadly infection. It is heartbreaking that all the efforts that our angels put in are at times disregarded by actions such as these which may range from the minutest gestures to sharp-mouthed words- where is the empathy?

These medical ambassadors that heal people both physically and spiritually are aware of the fact that for the COVID-19 patients, the only points of contact are them. It is out of this awareness that efforts to genuinely and compassionately communicate to frightened and terrified patients, and conceivably be their last contact before some will require a last chance at life – ventilator. The patient will receive maybe 15 or 20 minutes to see their loved ones before sleep induction for some days, weeks, and some forever.   They try all that they can to ensure that their patients do not feel the pain or hopelessness in all its entirety of having to stay away from their friends and families. The doctors and nurses ease their anxiety and comfort their minds and redirect their thoughts with prayer an inspiration rather than despair and sadness that shroud their rooms in darkness.

For those tasked with the management of our patient’s conversations outside their workplace to revolve around the nature of the virus, they have no clear path to escape. Some will close their eyes in despair just for a moment and they are flooded with memories of days gone by only to be brought back to reality once they open their teary eyes. Some doctors and nurses, hearing of others from their profession who have succumbed to the disease, have decided to talk to their children and family of how things should go about if the same were to happen to them – these healthcare workers have even started securing their will if circumstances change and they never return home.

Yet, they push through with this suffering around them and perform the duties for which they’ve been prepared for their whole life – the ethical and moral obligations that their profession bestows over them. To put others before themselves is what the medical discipline requires them to do. And without a word of protest, they assemble and put their skill into practice. In the face of an emergency of an unknown invisible killer, in a matter of a few day’s this executioner dispatched thousands of people and those that fight for our lives deserve much more than mere acknowledgment by words of gratitude and merit.

Our true warriors today at the war on the front lines – wartime warriors saving lives and giving theirs for yours. Brave, Fearless, and Heroic – their spirit is what unites us all with God and faith.

Coronavirus: Are We Being Played, or Not?

It's Time to Impeach Nancy