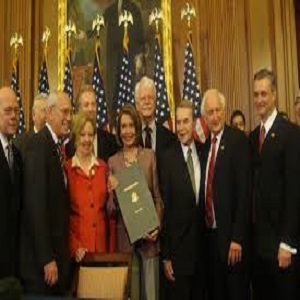 If the Wuhan virus doesn’t destroy our economy, there’s a strong possibility Democrat over-reach will. The Democrat Party is sick and Nancy Pelosi is patient zero. She claims President Trump has blood on his hands, that he’s “fiddling” while people are dying. Let’s do something nauseous-Nancy won’t, let’s take a look at the facts.

On January 31, President Trump put in place his China travel ban. Democrats wailed he was over-reacting. But China lied about the extent of the virus, how it was passed, and how contagious it was. They also “disappeared” healthcare professionals and journalists who had tried to tell the truth about it. We also know that President Trump’s China travel ban saved tens of thousands of American lives.

A week after the travel ban, during his State of the Union speech, President Trump mentioned steps the federal government was taking to protect Americans from the virus. But rather than take time out of impeachment to join the fight, Pelosi dramatically ripped apart Trump’s speech on national TV.

Three weeks later, on February 24, Pelosi made a major political event out of visiting San Francisco’s Chinatown and others to come out as well — eat, drink, hug someone from China. All the while, Pelosi criticized Trump for his handling of the Chinese virus. When he did something, she accused him of over-reacting. If he didn’t do something, or tried to sound positive, she claimed he was ignoring the science.

All that could be discounted as plain old Pelosi politics though. Her real offense was hijacking laws intended for virus relief to push a wide array of leftist goals having nothing to do with protecting the health or economic well being of American families. Things like tax funding for Planned Parenthood, carbon limits for airlines, more money for the arts, new diversity rules for companies, looser union organizing rules, expanding the Obama phone program, a $15 minimum wage, $25 million for the Kennedy Center, and prohibiting states from requiring voters show I.D.

Now, Pelosi’s hinting there will be more investigations of Donald Trump after the crisis passes, and maybe more impeachment moves. Democrats are quick to blame Donald Trump for the lack of ventilators and protective gear. But the threat didn’t start when Donald Trump took office. Health care officials have suggested for more than a decade that the U.S., along with every other country in the world, is ill-prepared for a serious pandemic.

In other words, Democrats have their reasons for not spending to prepare for a possible pandemic. Republicans too. So it’s more than a little hypocritical when Democrats criticize Donald Trump for not doing what they didn’t do. They’re literally painting one American political party as demonic while claiming their hands are clean.

The question at this moment is less, what didn’t you do before; and much more, what aren’t you doing now? For Pelosi and Democrats, that includes holding up virus relief for job creators and working families in order to wring out of the crisis all the leftist policies they could never have passed without it.

Daughter of Phyllis Schlafly: FX Series About Her Mother Is 'Biased Fiction'