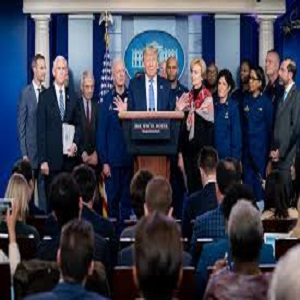 If there’s one thing Donald Trump has proved while President, it’s his capacity for multi-tasking. And in the last few weeks, he has not only had to walk and chew gum; but also to skip rope, hop scotch, and jog all while both looking forward and keeping a watchful eye on his rear view mirror.

We can all agree that fatalities owing to the Wuhan Flu must be kept to a minimum. Most people think, while less important, it’s also important we don’t destroy the economy. When the curve is flattened, Americans will need to get back to jobs – jobs generated by businesses that still exist from before, and new businesses that entrepreneurs haven’t been frightened away from starting.

I obviously know the complaints about Donald Trump. Few journalists, academics, or political thumb suckers, bother anymore to disguise their disdain. Still, it strikes me that Trump is exactly the right person in the White House at exactly the time he’s most needed. If you supported Hillary, stop reading now. Because you’ll be offended by where this is going. From what I can tell, based on her history, were she president the only one making money in America would be the Clinton Foundation and those contributing to it. She was always an expert on “pay to play.”

Our sometime ally, Saudi Arabia–along with our almost always enemy, Russia–decided to start an energy war to bring down the price of oil and put the US out of the natural gas fracking and oil development business. Why would they care? Because the US is increasingly self-sufficient in energy. Not only do we produce enough for our own use, thanks in part to Donald Trump, we’re now net exporters of oil and gas. Our foreign policy must no longer be determined by our energy needs. We no longer have to pass the hard earned income of Americans to countries who hate us in order to supply us oil and gas.

In hindsight, the move was relatively swift. We went from depending on countries like Saudi Arabia and Venezuela, to total energy independence in the space of less than 10 years. That’s the power of free markets. But capitalism requires capital. It’s the life source of market economics, and if capital stops moving through the market’s bloodstream, the market will eventually fail.

Restricting that capital from U.S. drillers and frackers is precisely what Saudi Arabia and Russia want from their energy war. Under normal circumstances it wouldn’t work. But thanks to the Wuhan virus; people aren’t driving as much, they’re not working as much, demand is relatively nil, and the capital required to buy a barrel of oil or a cubic yard of gas has tanked. The situation quite literally threatens to cost the jobs of hundreds of thousands of Americans in the oil and gas industry, and put thousands of drillers and frackers out of business.

Drillers need oil to rise above $50 a barrel. Today, it’s around $20.00. Apologies to AOC and the other socialists in Congress, but you’d be near brain dead not to understand that if it costs American drillers $50 to produce what they can only sell for $20 they’ll soon be out of business. I know the President is vitally aware of this. Like many Americans, I’m hopeful he can do something about it so we don’t have to rely on countries that wish us harm for our energy. If that happens, the road to economic recovery will be much longer and bumpier.

That, by the way, is exactly Joe Biden’s plan — stop all fracking and drilling on federal lands and even limit it through regulation on private land. He doesn’t seem to understand such policies will either toss us back into the dark ages or force us to once again depend on those who hate us.

As essential as it is that Donald Trump acts to resolve the dire threat to our energy independence, it’s only one of the many things that threaten America’s economy and world leadership. I don’t know what he’ll do. I do, however, trust that in this precise moment, Providence has indeed given us exactly the president we need. I and many other Americans are grateful.

Alan Dershowitz: Demonized By the Left for Defending Trump