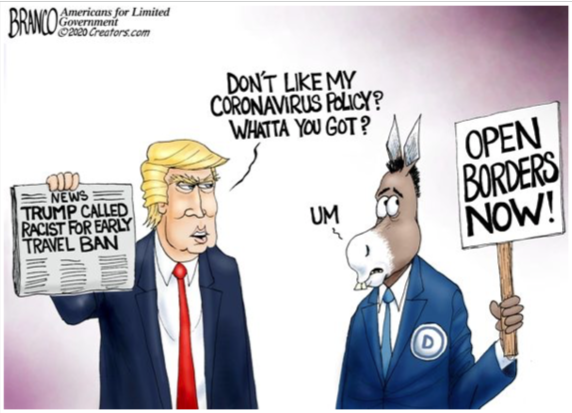 If I were so inclined, perhaps “Coronavirus Soapbox,” would be a good title for a weekly column. I am not so inclined; I am too lazy, and besides the bug to motivate me does not always bite.

However, today is different from other days. No, I am not reclined, nor am I eating unleavened bread. What I am inclined to write about is to cover some facts regarding the last 3 1/2 months. What do we know?

We know that the media hates Trump. We also know that the prevailing opinion among those who detest the President is that 1) He does not listen to his advisers, 2) he acted too slowly with respect to the Corona-virus, and 3) he is incompetent. I’m sure there’s a number 4, 5, and 6, but those are for another day.

We first learned of the Corona-virus sometime in mid-December when China identified a new virus, origin unknown, or so we thought. However, China was aware of the threat a month earlier. It wasn’t until January 11th that China reported its first death; a 61 year old man. While the U.S. took notice, On January 21st, Dr. Anthony Fauci, Trump’s top adviser stated, “The virus was not a major threat to the U.S.” Being interviewed by Greg Kelly, Kelly asked, “Bottom line..We don’t have to worry about this one, right?” Fauci replied, “Obviously, you need to take it seriously …but, this is not a major threat to the people of the United States.”

To put Fauci’s statement in perspective, by the above date, the U.S. had one confirmed infected case in the U.S. What should Trump have done at that point? Before you try to answer that question, you do not get the luxury of any hindsight. All you know, are basically the facts that I have stated. Could you imagine Trump trying to shut down all sports venues, when out of 340,000,000 people, only one was infected? Let’s fast forward.

By the end of January the World Health Organization (W.H.O.) declared the Corona-virus to be a “Public Health Emergency.”  However, there were few cases of infection, and by the end of January there were only 7 known cases in the United States. Without the benefit of any more expert advice than what Dr. Fauci had already stated, on January 30th, Trump closed the U.S. borders to anyone traveling from China. Predictably, the media reacted by stating that Trump was xenophobic and racist. Could the national media have acted any more ignorantly? Probably not.

In the meantime, and this has just recently come to light, China was hoarding, what was to be, critical supplies to curb its own infection rate. Additionally, the information that the U.S. sorely relied on, according to U.S. Intelligence Agencies, to assist us in the fight against the virus were lies. In fact, and this is an important item, it was Dr. Deborah Brix, a leading health official, who stated, “China’s public reporting, or lack thereof greatly influence our decisions.” Let’s move onward.

By February 15th, the total amount of those infected in the U.S. was 15; that’s right only 15. Should Trump have suggested ‘economically closing down the country’ at that point? Should he have been clairvoyant and knew that only 30 days later, there would be a mass run on masks, ventilators, and PPE’s?

Yet, as far as the media was concerned, Trump is ignorant and doesn’t listen to anyone. By the end of February, would you like to know how many infected cases we had, and what Dr. Fauci said? On February 29th, the U.S. had a total of 24 cases; that’s it! And what did Trump’s expert, Dr. Fauci say? He stated that “Americans didn’t need to change their behavior patterns.”

At the risk of being repetitive, I ask again, “What should Trump have done?” Well, let’s take a look. Back in January the CDC established a Corona virus Management System, along with a travel notice for anyone traveling to Wuhan China. On January 17th the CDC began health screening at three major airports of entry. And by the end of January, the NIH was working on the development of a vaccine. And by the end of January, Trump declared the virus to be a Health Emergency.

While the Trump Administration didn’t exactly get caught flat-footed, the United States, relative to ventilators, masks, and PPE’s certainly did. We know of the story that the Obama administration, after the H1N1 virus, didn’t re-order ventilators. And we know that Gov. Cuomo, when he had the opportunity to replenish New York’s supply, he didn’t.

By early February, the CDC expanded its airport screening to eight major airports. Partnerships were announced with major drug companies in the effort to develop a vaccine and treatment for the virus. However, as I pointed out above, we still only had fewer than 30 confirmed cases of infection.

Let’s take a breather. I ask again, and without the benefit of hindsight, “What would you have had Trump do?” He was not acting in any fashion close to incompetency, and his advisers had Trump’s complete ear. And let’s not forget that the W.H.O. was weeks away from declaring the virus to be a pandemic.

On March 1st, the total infected cases in the U.S. were about 35…and then ‘the virus hit the fan.’ By mid March, the W.H.O. declared a pandemic, and the infection rate, by March 20th, exploded to about 19,000. The crisis was on, and then it became political.

And so here we are today. The U.S. has an abundance of ventilators, anyone needing a hospital bed will get one, Trump has forged partnerships with numerous drug companies, and probably within a month, ‘instant’ testing will be commonplace, and a vaccine is probably about 7-8 months away, all of which took place in about a 60 day period of time. And that is being incompetent? I think not.

However, none of this is good enough for media or for hardened Liberals; any Trump success is their Kryptonite. For them, Trump needs to fail, and he needs to fail ‘big-time.’ How else could Trump lose the election in November? In my opinion, the end game for those hard-core Liberals is to try to extend the economic pain. The original goal of the economic shut-down was to buy enough time to ramp up for the production of ventilators, masks, hospital beds, and other supplies. We are already at that point, and both Republicans and Democrats know that. Yet, if the Democrats can extend the economic pain, and have the economy worsen to life-support, then the chances of any economic rebound, or a quick rebound, become remote. Come November, it’s Trump’s fault, and if people buy into that, then the Democrats are back in power. And please don’t tell me that Democrats care….what they do care about more than the people is the power they will gain by defeating Donald Trump.