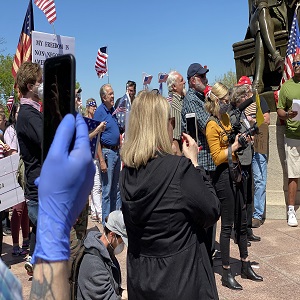 As a Journalism student, and current Intern here at Politichicks, I usually do what I have been taught so far, not make myself the story. I decided to make an exception here because I wanted my observations to be just that: my observations. I know all about the field I am about to enter. Journalists no longer follow the basic tenets of the profession. They are essentially, propagandists for their own agenda, usually a liberal Democrat agenda. It is time at least one story was heard from the other side, another perspective.

As we know, protests are being held at State Capitals all over the nation. As Americans, we are most certainly worried about the loss of life, and feel compassion not only for those who are afflicted, and those who care for them, we want the citizens our nation to heal, and for our lives to return to normal. And while many people are attempting to characterize the Coronavirus debate as lives vs. money, there is a large portion of Americans who would characterize it as lives vs. lives. They realize that the economic life of our nation is on life support, and someone has to stand up and fight for it.

We know how the mainstream media likes to portray Conservatives and it is really no different at the local and regional level. For example, a local St. Louis television station reported the turnout at “about 100 people” but there were actually several hundred. Some people remained in their vehicles and drove around the circular grounds of the Capital, but many more gathered behind the Capital building, right in front of a window which was most likely the Governor’s office. Everyone wanted to make sure they had a front row seat.

Several people spoke to the crowd, including podcast host Dave “SuperDave” Day, and local St. Louis radio legend Jamie Allman. They touched upon what seemed to be most of the attendees’ main concern, the over reaching arm of State and local governments. At both levels, restrictions have been put in place in light of the pandemic that have been sold to the general public as being for “safety” but are actually seen as wildly unconstitutional by a good portion of that same public. This is seen as an even bigger problem, given the fact that Missouri Governor Mike Parsons was not elected. He ascended to the Governor’s office when former Governor Eric Greitens resigned. For St. Louis County residents, this problem is a two-fold one as St. Louis County Executive Dr. Sam Page also took over after a corrupt former County Executive was sent to prison for illegal activities. But Missouri citizens came to the rally from every part of the state to make their voices heard.

Small business owners talked about how their businesses were barely staying afloat, and that they could not remain shut down for much longer. A young single mother of two also talked about how she very much needed to get back to work to support her family. Missourians from all walks of life made it known that this shut down of business is hurting everyone, and one of the most important things they wanted their elected officials to be aware of, is that there is an election in November that they fully intend to participate in.

In attendance was State Representative Mike Moon from the Springfield area. He spoke about a House Resolution he introduced, HR5502, which would end the Governor’s state of emergency declaration immediately and send Missourians back to work. The Resolution still needs quite a few co-sponsors. The Missouri House goes back into session on April 27, and hopefully, he will get those cosponsors. Ironically, on that day, another rally is scheduled at the State Capital. Missouri citizens plan to keep the pressure on both the Governor and the State Legislature to follow through on guideline restrictions. Governor Parsons has announced the beginning of reopening of businesses on May 4.

The feeling of electricity that ran through the crowd was very palpable. People are angry, they are upset, and they are scared for the economic ruin that they see slowly befalling the nation. They also believe that many of the issues surrounding the breakout of the virus are purely political, that it is just another attempt to somehow remove Donald Trump from office. They know the Democrat Party will do anything to distract from their weak presidential candidate in Joe Biden, and the overall implosion of their Party.

Most states will be opening limited numbers businesses by May 1. It will be up to the people of Missouri and every other state to keep pressure on their Governors and State Legislatures to remind those elected officials that they work for We the People.

Daniel Greenfield: Believe All Women - Unless They Accuse Joe Biden