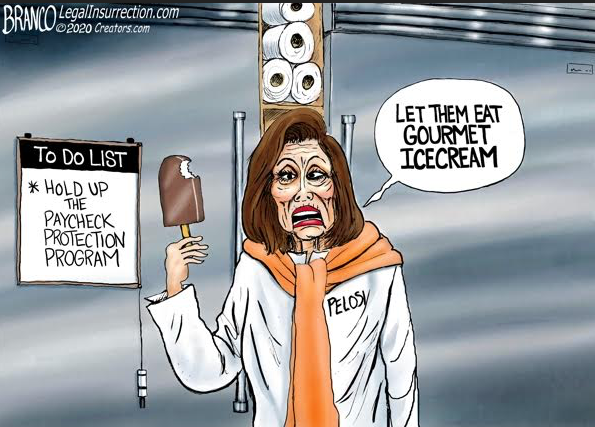 Standing before her $11,000 Sub Zero Fridge in her San Francisco mansion, Speaker Pelosi tells the Washington Post that the voters mustn’t listen to President Trump, but, instead, listen to her and those scientists who agree with her.

Nancy Pelosi; the Democrat Speaker of the House who upon hearing about a rescue bill for small businesses going under due to the Covid shutdown, insisted $25 million be given to the Kennedy Center for their expansion. Within day’s of the bill’s passing, the Kennedy center laid off the members of the National Symphony Orchestra.

Nancy Pelosi; the San Francisco Democrat, whose district suffers nearly the highest number of homeless Americans in the country, thinks the solution to the Chinese Virus is requiring all Americans to vote by mail.

Nancy Pelosi; second in line after the vice president to assume the presidency, blasted Trump for closing America to travel from China, then protested by holding a street party in San Francisco’s China Town. After all, why should a global pandemic stop us from enjoying our Kung Fu Chicken? Not sure how many new infections occurred because of Pelosi’s press stunt, but Trump’s China travel ban undoubtedly saved tens of thousands of lives. But in Pelosi-world, nothing gets in the way of a great photo op or a baseless allegation.

Nancy Pelosi; a Member of Congress for 33 long years has never held a job outside government, but knows best what’s good for small business and working Americans.

Nancy Pelosi; the woman who claims near saint hood in the Catholic Church, yet is one of Congress’ strongest supporters of abortion till birth.

Nancy Pelosi; wee though she is, rules the Congress with an iron fist. They don’t call her “Nasty Nancy” just because they like alliterations. You may remember, that at the State of Union address, she insisted all the female Democrats in the House dress like they’d just stepped out of the Handmaid’s Tale. Did you also notice they never applauded, smiled, or stood for any line in the speech unless Nancy gave them an almost imperceptible “secret” nod? Cross Nancy and your political career is left smoldering.

Nancy Pelosi; who, as Speaker under Obama, regularly carried his water. You’ll remember her insisting, “We have to pass the bill so that you can find out what is in it.” She promised it would make healthcare more affordable. It didn’t. She promised it would lead to greater innovation and investment. It didn’t do that either. Then, right after Obama said it, Pelosi agreed, “if you like your doctor, you can keep your doctor.” That was untrue too.

Since the day he was elected, Nasty Nancy blasted away at the president with both barrels — reloading daily. It’s ironic that the woman who claimed Trump had betrayed America with Russia, has taken the side of China against the American people.

Because Trump reminds us it came from China, she claims he’s a racist. Because he revealed that China lied about the virus for months, and could have prevented 90% or more of the deaths that resulted from the virus if they’d just told the world the truth from the beginning, she accuses Trump of xenophobia. Because he banned travel from China, Pelosi claims it’s proof Trump hates people of color. When Trump announced he’d suspend funding to the World Health Organization for aiding and abetting China’s role in spreading the virus that has since killed hundreds of thousands of people around the world, Pelosi called his decision dangerous and illegal.

She blames Trump for not having enough ventilators, protective gear, and medical stocks. Really! It was Obama-Biden who refused to stock up for a predicted pandemic as they instead spent billions on Obama-phones, support for illegal immigrants, and punishing healthcare facilities with reduced Medicare reimbursement rates. And it was Joe Biden himself who served as Obama’s point-man on China, assuring us China was committed to the world’s best interests. And yet, two months ago ships carrying tons of protective masks and gowns enroute to the U.S. were ordered by Biden’s pals in the Chinese Communist government to return the supplies to China — supplies Americans had already purchased and paid for.

It was Trump, on the other hand, who pleaded with Democrats for 3 years to help make America more independent of China’s stranglehold on our supply chains. It was Trump who prevented a huge glut of new cases when he stopped travel from China. It was Trump who convinced private manufacturers to make the ventilators and protective gear our health care workers needed. And when he learned it still wasn’t enough, it was Trump who invoked the Defense Production Act to get more. And it was Trump who sent the hospital ships, Mercy and Comfort, to relieve possible pressure on Los Angeles and New York City.

It was Nancy Pelosi, meanwhile, who raised the ante for her support of relief funds by demanding more money for the Kennedy Center, insisted companies added “diversity” officers to their staffs, tried to get taxpayer funding for abortions, wanted more money for illegal immigrants, and tried to impose a variety of New Green Deal regulations. Nancy Pelosi’s record is one of arrogance, superiority, and deceit. Her leftist political bent is wrecking our economy and destroying the lives of millions of Americans, all so she can embarrass the President and put Democrats in a position to win this November.

Here’s what I want to know. With a long and egregious record like her’s, why hasn’t the U.S. Senate already moved to impeach? In this case clearly, the one who calls for impeachment the loudest, is the one who deserves it the most.

The Ultimate Sacrifice and the True Heroes of America