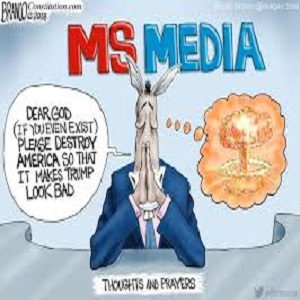 Even if Donald Trump is not the guiltiest president in U.S. history, he is certainly the most disparaged.

Resistance movements, Russian collusion, Ukraine quid pro quo’s, countless investigations, a failed impeachment with more rumored to come; allegations of racism, sexism, and worse; Democrat leaders, with massive support from the left-leaning media, have ginned up a powerful campaign to convince Americans they should hate Trump as much as Democrat leaders do. But is a strategy of hate for the president the best way to beat him in November? Not so far at least.

Yes, Biden leads Trump in most national polls. In the Real Clear Politics national polling average Biden is up 5.9 percent over Trump.1 But states like California, New York, and Illinois are massively overweighted in those polls, and elections for president are determined by results in individual states, not a majority of the nationwide popular vote. In the all-important battle ground states, the race is much closer.

Maybe even more predictive of voter behavior is that in an April 13-15 Wall Street Journal/NBC poll, Trump beats Biden by 11 points on the question of who is best able to deal with the economy. 47% say Trump; 36% say Biden.2 Once we emerge from the pandemic, it’s a safe bet economic recovery will be the number one issue among voters.

What’s more, if the Democrat strategy of hate for Trump were really working, wouldn’t Biden be up by significantly more than 6 points nationally? The polls seem to indicate that the constant chorus of Democrats-who-cried-demon have hurt Democrat reputations as much as Trump’s. It seems it’s also damaged the credibility of their most powerful weapon in the war for public opinion, the mainstream media. Now Democrats are intent on amping up their over-reach with allegations that Trump cost American lives by mishandling the Wuhan Virus.

In January and February, Biden and other Democrat worthies accused Trump of acting too harshly to block travel from China and other virus hot-spots. They told Americans the virus wasn’t really much of a threat, that the health care system was more than able to handle the virus fall-out, and that Trump was a racist and xenophobe for picking on China.

But in March and April, their complaints took an about-face, and Democrats accused Trump of not doing enough soon enough. They accused Trump of not building the ventilators Obama-Biden failed to build, of not stockpiling the protective gear Obama-Biden failed to stockpile, and of not planning for the pandemic Obama-Biden didn’t plan for. Many Democrats even complained that Trump wasn’t moving aggressively enough to nationalize whole industries that Obama-Biden may have wanted to nationalize, but lacked the rationale necessary to circumvent the Constitution. It’s ironic that for 3 years, Democrats accused Trump of dictatorial tendencies, but now allege malfeasance because he refuses to exercise dictatorial power even though a pandemic gives him cover to do so if he were actually so inclined.

The Harris/Harvard poll from April 14-16, shows 51% of Americans approve of Trump’s handling of the coronavirus while 49% disapprove. More to the point, 65% either approve or mildly disapprove.3 Most people seem to understand a lack of preparation for a once in a century pandemic isn’t particularly surprising. Many also wonder how Democrats like Nancy Pelosi can justly criticize Trump now for under-reacting in February when she attended a street party in Chinatown and accused him of over-reacting then.

Meanwhile, Democrats are doing all they can to block economic reopening and prevent assistance to job creators so they can keep workers on the payroll. The more businesses that go under, and the higher the unemployment numbers rise, the better their chances for beating Trump.

Will it work? If they convince millions of Americans it wasn’t China, or the WHO, or the lack of planning by Obama-Biden and others, but rather, it’s all Trump’s fault, then maybe. But I don’t think so. I believe Americans are motivated far more by a desire to see hope, fairness, and justice win over hypocrisy, cynicism, and callousness. I don’t think Americans will respond to hate. And that seems to be all the Democrats are offering in 2020.

1 https://www.realclearpolitics.com/epolls/2020/president/fl/florida_trump_vs_biden-6841.html 2 https://www.wsj.com/articles/more-americans-fear-lifting-coronavirus-restrictions-too-soon-wsj-nbc-poll-says-11587301203?mod=searchresults&page=1&pos=1 “But voters said Mr. Trump would be better at dealing with the economy, by 47% to 36%