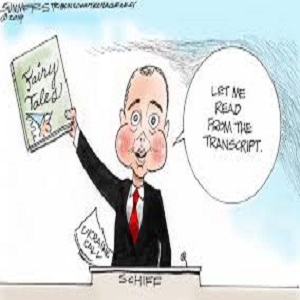 Adam Schiff told NBC’s Meet the Press he’d seen “evidence that is not circumstantial” that the Trump campaign had colluded in Russia’s 2016 election interference. The Mueller investigation found there was no collusion. Next Schiff claimed a whistle blower would testify to Trump’s crooked shakedown of the Ukrainian President. He doubled down by claiming he had irrefutable evidence of Trump’s “crimes.” Then he chose to keep the whistle-blower secret and failed to cite even one allegation of an actual crime in his articles of impeachment against the President.

Clearly, Schiff has proved himself vicious, ugly, and dishonest. Adam Schiff once called on fellow Congressman and Intelligence Committee member, Devon Nunes, to recuse himself from the Trump investigation because Nunes disputed there was evidence of Trump’s Russian “collusion.” Later, we found out Schiff had illegally subpoenaed and reviewed Nunes’ phone records. Schiff even now is being sued to release those subpoenas which he has refused to do.

So we know that Schiff dishonestly, and even illegally, has persecuted Trump and fellow members of Congress with whom he disagrees. But what about the job Schiff is supposed to be doing as Chair of the House Intelligence Committee. Broadly speaking, Schiff’s duty is to investigate issues related to threats against America’s national security from foreign actors.

It’s a legitimate question then to ask why Schiff was so thoroughly obsessed with impeachment while a deadly virus from China was starting to threaten the world … a virus, some have suggested may have been created by the Chinese and released either intentionally or accidentally as a forerunner to a possible biological attack. The truth is that Adam Schiff and his fellow Democrats so hate Donald Trump they proved they would rather demonize him than look into the activities of foreign powers that threaten the health, safety, and lives of their fellow Americans.

And yet, he blames Trump for the virus. Witness this tweet from Schiff: ‘Trump’s conduct at his coronavirus “briefings”—spreading misinformation, contradicting medical experts, and attacking reporters—demonstrates both a lack of leadership and why we need real oversight. His decisions now are a matter of life and death. Accountability matters.’ Wow! If it’s possible to double down on your previous doubling down, Schiff has done so.

He’s not alone. Nancy Pelosi, who accused the president of treason before the Mueller Investigation, acted like a three year old at the State of the Union when she ripped up Donald Trump’s speech on national TV. Someone should have taken away her 757 for a month or two for acting like a petulant child. Clearly, Democrats want to reverse the Trump 2016 election victory. And they’re not willing to wait until an election to do it. How else to explain their doing what no other Congress has ever done — pass articles of impeachment with not a single vote from the other party. 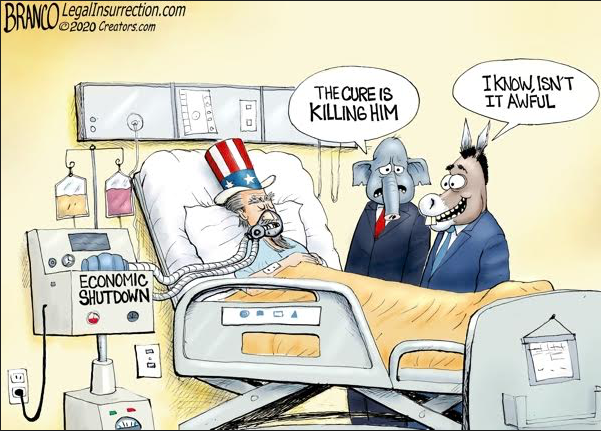 This merry band of far left loons have proved over and over they’re hell bent on throwing Donald Trump out of office. Now Pelosi and Schiff are talking about more investigations of the President leading potentially to even more phony charges of impeachment. They’re showing how Trump derangement syndrome could do more damage to our country that the Wuhan Virus.

Initially, they faulted Trump for banning travel from China to the U.S. Their response was to call him a racist and bigot. Soon after, he banned travel from Europe. They called him a xenophobe. Since, however, it’s become clear those travel bans saved the lives of 10’s of thousands of Americans, Democrats have revised their attacks.

Now they accuse him of not responding soon enough. Not stockpiling more protective gear and medical equipment earlier. Not keeping the economy and country closed even longer. No one really expects politicians to take personal responsibility for making honest mistakes, or for admitting they’ve changed their minds as new information comes to light, or for saying things they sincerely believe at the time, but later turn out to be untrue.

That’s not this. This is Adam Schiff, Nancy Pelosi, and nearly every Democrat in Congress willing to say or do anything they must to overturn a legitimate election by the American people. Even if it means making fellow Americans more vulnerable to a deadly pandemic originated by our biggest competitor and arguably worst enemy.

I won’t do what Schiff and Pelosi did when they falsely alleged Trump was a Russian mole. I won’t say they’ve taken China’s side against Americans. But I will say they’re hatred for Donald Trump is endangering the lives and livelihoods of Americans. They should put that hate aside and find ways to hold those truly responsible to account, starting with China.

The World's Invisible Enemy is Plain To See