The musicians that I the respect the most are the survivors. People that have taken risks and learned from the survival of those risks intrigue me. The art of the those that died early, whether tragically or stupidly, is only interesting for the music itself. In that circumstance, I respect the art a bit more than the artist. 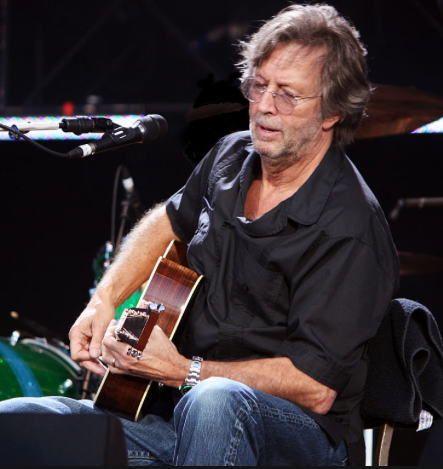 In recent years, it has grieved me greatly to have written posthumous tributes to mentors and influences like Allen Toussaint, Dr John, Gregg Allman and B.B. King, among too many. Tangible survivors that I wish I had spent more time with.

So it gives me an honest pleasure to write about Eric Clapton while he still walks among us. We can perceive Clapton as a humble survivor.  A living example of someone who has walked through the fire. He came out of the flames with his humanity and humility intact. It has been a long journey for Clapton. Though in this life it is not the journey, but the ultimate humanity that is revealed because of that journey.

This is not going to be a traditional, biographical study of Eric Clapton’s life and music. This is more of an overview.  Without any doubt, Eric Clapton has been a huge influence on me as a guitar player.  From his lyrical phrasing to the myriad of tones coming from his various guitars, his music continues to inspire. I have been a life long fan. But the transformations in Clapton’s life have had an even more formative influence on me as a human being. By the time this article is published his family and fans will have celebrated Clapton’s 75th birthday on March 30th.

So let us start this extended birthday card with some memories: The first time I saw Eric Clapton was during his tenure with Derek and the Dominos.  This was at the Virginia Beach VA Dome on October 31, 1970. I would love to say Clapton impressed me in the same manner that Duane Allman did in the August 1970, Norfolk, VA Allman Brothers concert, but that would not be true.  I wrote about the August 1970 Allman Brothers concert extensively in the May 31, 2017 Politichicks article, Gregg Allman: No More Cross to Bear.

Even with my youthful and unfettered vision, Clapton seemed irritated on that October 1970 night. Maybe in some sort of trouble or in some sort of distress?  In actuality, he seemed quite angry.  The object of his anger was a malfunctioning wah-wah guitar effects pedal.  To make it work, he was stomping on it with the full force of his body.  The force of his efforts transmitted through the Dome stage floor and was picked up resoundingly by the P.A. system. It sounded like thunder, BOOM!

Clapton stated clearly, “I’m sorry,  my f**king pedal isn’t working.” I remember thinking, with my 13 year old experience and vocabulary, “What an a**hole.”  Yet, when he wasn’t stomping on his pedal and was just playing, it was magic. Like angels speaking through a Fender Stratocaster.  The band was playing a lot of material from the then unreleased album, Layla and Other Assorted Love Songs and a lot of Blues.

The Layla album stands as a pinnacle influence on a whole generation of guitar players.  The guitar parts established by Eric Clapton and Duane Allman remain a touchstone for anyone seeking to play serious Blues/Rock guitar. It  also remains one of the greatest collections of songs on the subject of unrequited love.

After 1970, Eric Clapton largely withdrew from the public eye. Between a stalled  love affair with Patti Harrison (George Harrison’s wife at that time and the subject of the Layla album), the deaths of Grandfather Jack Clapp and his close friend Jimi Hendrix, Clapton sought relief from his pain. He became a heroin addict.

The spotlight of fame burns especially hot on those who have the mantle of fame or idolatry thrust upon them, especially for one as young as Clapton was when he first tasted fame. I never have fully understood the idolatry of musicians and public figures. It seems bizarre to place anyone on that impossibly high pedestal, like a god.  Eventually, everyone teeters and falls in this life.

Early in Clapton’s career, there was graffiti on the walls of London declaring, “Clapton is God.” That was during his stint with John Mayall’s Bluesbreakers, his second professional band after The Yardbirds.  Being called “God” had to be incredibly flattering to Clapton and vastly frightening at the same time.  After all, he was only about 21 at the time.

I saw Clapton again in September 1974, where he played an abbreviated nine song set in Hampton, VA. By this time he  had switched his tipple from heroin to alcohol.  My friends and I than saw him again in August 1975 where he played brilliantly for almost three hours.  There were many concerts seen over the years after that 1975 concert, including another great show with Muddy Waters in 1982.  No matter the inconsistencies, I remained a die hard fan.  Those bent notes of his Blues guitar always moved me towards the fretboard, inspired.

Clapton’s passionate guitar playing and heartfelt singing are what moved me as a musician.  What is even more remarkable though has been his development as a human being.  Those are the more profound lessons of Eric Clapton’s life.

Eric Patrick Clapton was born in Ripley, England on March 30, 1945.  He was conceived, out-of-wedlock, by 16 year old Patricia Molly Clapton and a 25 year Canadian Soldier, Edward Fryer. Fryer was also a musician.  An out of wedlock  pregnancy considered to be a scandal in the 1940’s.  Clapton grew up believing his grandmother Rose and her second husband, Jack Clapp, were his parents.  It was not until he was the age of nine that full extent of his heritage was revealed to him when his mother, called Pat, re-entered his life for a brief visit.

His Mother, Pat, rejected any concept of Eric ever joining her household.  This rejection embittered Eric. His childhood had been idyllic until this point, his grandparents had spoiled him.  While still a child,  he discovered the Blues of the American South. The Blues was like a soul reflection for Eric Clapton’s childhood pain.

By his mid-teens he was becoming apt in the vocabulary of the Blues on the guitar.  As stated, that lead to his playing with the Yardbirds, and then John Mayall. The innovative trio Cream was where America got their first public taste of Eric’s great playing.  A whirlwind of bands and famous friends sessions followed with the band Blind Faith and Derek and the Dominos to the solo artist that we know today.

What is interesting about Clapton is that he experienced the pitfalls and addictions that can hit anyone sideways.  He survived those struggles and became an example of humble and sober living.

He found sobriety in 1988.   He did not want to be an alcoholic/addict around his toddler son Conor, born in August 1986. Clapton went to rehab and worked the program.  While in treatment he prayed to Almighty God up above for sobriety.  After leaving rehab he never had another drink or drug.  Prayer remains a daily activity for Clapton, framed by the 12 step program.

When his son, Conor, was killed in a fall from a window in 1991, there was a sharp intake of breath among the musical community.  Musicians all over thought Clapton was done for.  But instead of backsliding into previous bad habits, he continued to create great music, had some of his greatest successes and, with his own money, established the Crossroads Rehabilitation Centre on the island of Antigua.  He auctions, from time to time, some of the guitars from his vast collection to benefit the Centre.  He stages a yearly, fund raising festival titled the Crossroads Guitar Festival.

He married Patti Boyd in 1979, they divorced in 1988. Mainly because of the birth of Conor, from a relationship with Lori Del Santo. He married Melia McEnery in 2002. They have three children and Clapton also has an adult daughter, Ruth, from a previous relationship. In 2013, he became a grandfather for the first time with the birth of Ruth’s son, Eric Owen Bartlett. He cherishes his family and lives a quiet life in America and in England.

“I went down to the crossroads fell down on my knees…
Asked the lord above have mercy, save poor Bob if you please..”

Eric Clapton has found a place to live beyond the terror of the crossroads.  Triumphing over struggle and loss, he also fell to his knees, thanking his creator for his renewed life.  Artfully expressing the gratitude known well to all thankful survivors of the many crossroads of this life.  He plans to tour in 2021. I hope to be in the audience.