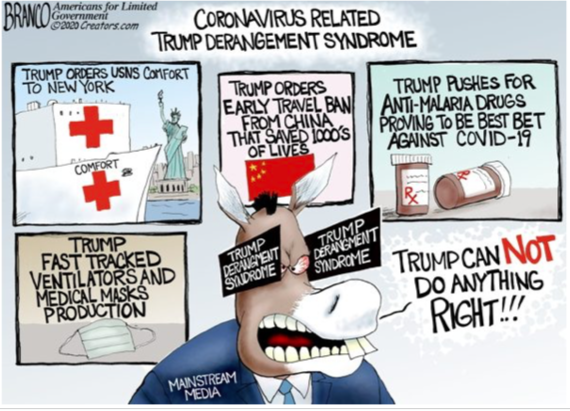 New Orleans has become one of the Covid-19 epicenters in the U.S. with more than 2,500 cases so far. No sooner had the death toll there reached 83 people, than Mayor LaToya Cantrell passed the buck and blamed Donald Trump. She claims the only reason neither she nor the governor canceled the February 25th Mardi Gras was because the federal government didn’t tell them to do so.

In the meantime, Nancy Pelosi and Chuck Schumer are already saying the $2 trillion stimulus package passed last week wasn’t big enough – despite the hundreds of billions worth of pork Pelosi put in the bill as the price for her support – like the 25 million for the Kennedy Center. I wonder if people at the Kennedy Center are as confused as the rest of us about what that money has to do with relief from the Chinese virus. No matter, they’ll happily take the money and place a nice little bronze plague somewhere in the Center thanking Pelosi.

Andrew Cuomo, New York’s very liberal Governor, got in a tuff with federal health care authorities and Donald Trump last week because he claims it’s their fault the Chinese virus has killed more Americans from New Yorker than anywhere else. This despite the fact he signed a law that allows New York abortion centers to kill more babies than anyone else – and to take their lives right up to the point of natural birth.

The Chinese Virus Task Force had asked — some might call it begged — that anyone holding stockpiles of medical equipment please donate them to hospitals so healthcare workers could be protected. The calls mostly went unanswered until Attorney General Barr announced on national TV, hoarders could “expect a knock on your door.”  Low and behold, turns out the super liberal Service Employees International Union just happed to find 39 million masks that nurses and doctors so desperately need.

Remember Joe Biden? (He’s increasingly becoming afraid most of you don’t…) So Joe built a TV studio in his home that allows him to appear on news broadcasts and send videos while on Chinese virus lockdown. He never misses a chance to blame the President for the virus and everything else while admitting he’d pretty much do exactly what the President has done.

Oddly enough, Biden has not shown one ounce of leadership among Democrats in Congress as they work to stuff any relief effort with as much leftist spending as possible. It’s almost like Pelosi and Schumer had jointly won the Democrat nomination for president. I feel bad for Joe. This crisis highlights not only how week a leader he is, but also how easily manipulated by his party’s bigwigs.

Far-left heartthrob, Alexandria Ocasio-Cortez, is absolutely outraged that illegal immigrants are excluded from receiving corona virus checks from American taxpayers. Why she thinks taxpayers should happily send money to illegal immigrants mystifies me.

Congressman James Clyburn (D-SC), the Congressman who finally got Biden’s primary ball rolling, said to a group of fellow liberals that this crises presents a tremendous opportunity to remake American government and society in the image of the far left.

Nancy Pelosi tried to do the same thing when she crammed the relief bill with a trillion dollars in “Green New Deal” junk, special interest garbage, and big government control.

It’s obvious Democrats in Congress have decided to go all in leading a socialist remake of America.  How do they justify it when capitalist free markets have raised living standards to historic levels for every American including the poorest? Because only socialism puts the politicians and elites in a permanent position of control over the people. Imagine. No more elections that aren’t already rigged.  It’s probably as close to heaven as most power hungry, cynical, big-government Democrats will ever get.

You and I, on the other hand, will be told our occupation, where we’ll live, what we’ll wear, what we’ll eat and drink, where we’ll go and won’t go. Think permanent COVID-19 crisis restrictions, except enforced at gunpoint by a federal police force beholden to the leftist elites who run things.

Think I’m exaggerating? Democrats were a lot more anxious to impose carbon emissions on airlines than they were in passing a relief bill to save family’s jobs.

Another provision Democrats fought for was Board representation for low level employees in every corporation. Doesn’t matter these “directors” would likely know next to nothing about running a multi-billion dollar company — trade deals, management, research, sales, or anything else it takes to keep a company growing.

It also doesn’t matter that such mandates totally realign the fiduciary responsibility of directors to first and foremost fulfill company potential. Only in that mission can a company realize the greatest positive impact on lifting the standard of living for working families, enhancing society, and most effectively serving customers.

But Nancy and her ‘we-know-more-about-everything-than-you-do’ group of liberal thugs don’t care.  They don’t care about what’s best for you, your health, or the economic well-being of your family.  They proved that when they tried to cram their far left agenda down our throats by threatening to kill Covid relief if their radical policies weren’t included.

Like him or hate him, Donald Trump is proving every day he cares about one thing — making America and America’s families stronger, healthier, and more prosperous. The choice this November is a simple one: Lets replace the self-serving Democrats in the House and the Senate with Republicans who will put working families, and America, first.

Why Would the Left Hate a Pillow?

Barry Shaw: The Legacy of a Marxist Failure- Dr. WHO