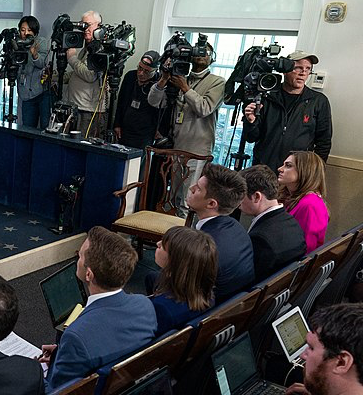 “You’re actually sitting too close,” President Trump remarked at a press briefing. “Really, we should probably get rid of about 75, 80 percent of you.”

Trump was only partly joking.

The White House Correspondents Association had asked its members to sit one seat apart at press briefings, but at a time when most businesses have been shut down even when they offer far more space to customers and employees, the sight of crowded press briefings is still surreally hypocritical.

Governor Jared Polis delivered his press briefing on social distancing surrounded by a huddle of other Colorado officials, including a sign language translator, and tightly packed reporters facing him. That’s not unusual. Governors and mayors have announced the shutdown of countless businesses for the sake of social distancing in the same format that is the opposite of social distancing.

The exemption for the media from coronavirus rules extends beyond these strange scenes.

When Governor Andrew Cuomo issued an order effectively shutting down most New York non-essential businesses, the list of essential organizations exempted from the order included hospitals, power plants, pharmacies, farms, banks, supermarkets, and the media. One of these items is not like the others.

The essential businesses provide necessary services that allow people to function. That’s not the media.

The question of what is an “essential business” is the difference between employment or unemployment, staying in business or going bankrupt, for millions of Americans. It’s a weighty financial and moral question that the media has entirely evaded by cutting in line and relying on its privilege.

A generation ago it might have been argued that the media provides important updates, but in the age of Twitter and handheld access to any website, the idea that the public is dependent on the media to stay informed about coronavirus health and safety information, or any other emergency issue, is silly.

If the authorities really need to alert the percentage of the population that uses radio and television, but not the internet, there’s always the Emergency Broadcasting System.

Forget the press conferences: those are bad enough and ought to go the way of phrenology and the buggy whip. But much of what the media does is either whip up panic from its offices or dispatch reporters to interview people. None of that accords with the requirements of social distancing.

When movie and television productions have been shut down because they’re an unsafe environment, why is crowding talking heads behind a desk and twenty times their number of crew into a studio okay?

Why is dispatching reporters to stick microphones in front of senior citizens at a Trader Joe’s or the emergency room of a hospital considered healthy or safe, rather than a public health hazard?

The media should be properly classified as entertainment and deemed non-essential. Aside from exploitative coronavirus coverage, much of what the media does is entertain, albeit badly, with celebrity gossip, scandals, shaming, cooking tips, viral videos, crossword puzzles, and anything that keeps it afloat.

None of that is essential.

And yet the Colorado Press Association dispatched a letter to Governor Polis demanding “assurances that the news reporting operations will continue to be an essential part of emergency personnel.”

Firefighters, police officers, paramedics, and reporters. Pick one that doesn’t belong in that category.

No one who drives a car off a snowy embankment into freezing waters looks upward hoping to see a camera and microphone, instead of a red jumpsuit or a blue uniform with a silver badge. If you’re not saving lives, you’re not emergency personnel. Smearing your political opponents is not an emergency.

The Florida Press Association wrote to Governor DeSantis pleading with him to exempt the media from “business shutdowns or shelter-in-place programs within Florida” because the media is “‘essential’ to public health and welfare.”

A gym does far more for public health than every single media outlet combined. And we’re closing the gyms.

The FPA claimed that “media organizations are essential businesses to remain open during the COVID-19 crisis in order to continue to inform the public about their health, safety and welfare and convey accurate, reliable and critical information at a time of great need.”

The media is many things: a source of accurate and reliable information isn’t one of them.

Any business that simply posts CDC advisories on its premises can do it better. Every platform is already embedding the same coronavirus advisories about social distancing and washing your hands.

But, mostly, the media has gotten its way.

Whose life does the media sustain except, vampirically, its own?

Los Angeles County’s order treats “newspapers, magazines, television, radio, podcasts” as being on a par with truckers, dentists, and police officers. (And since this is California, “cannabis dispensaries”.) As did San Francisco, though beyond the media, it also took care to designate bicycle repair shops and cannabis dispensaries as essential businesses. This has been the template across California.

But who decided that the media is an essential business and why?

It’s not a First Amendment issue. Not when churches and synagogues have been shuttered. San Jose ordered a firearms store to shut down, deeming it a non-essential business. A firearms dealer is in the business of enabling the Second Amendment rights of people on a much broader scale than a newspaper is in the business of enabling the First Amendment rights of anyone except its employees.

San Jose’s definition of essential, which encompasses marijuana and media, but not guns, shows that the issue is not an objective one of need, but of values. And values are based on tribal feelings.

The CDC had warned that smoking and using marijuana increases coronavirus risks for younger people. Health advisories had warned drug users against sharing drug paraphernalia because it can spread the coronavirus. But San Jose chose to protect marijuana stores because it likes pot and hates guns.

California and New York’s governments really like the media even though it poses a health risk.

As the rolling shutdowns continue, the ultimate debate over the privileges of the media may be weighed by the White House. And the lobbying campaign is underway.

The Chamber of Commerce listed the media on its proposed roll of essential services in its letter to President Trump. The letter asks him to include the media on the list of federal exemptions.

Such decisions often end up being made by advisors and bureaucrats. This should not be one of them.

The media should not benefit from an exemption that it has done nothing to earn. Instead of serving a constructive function, it has whipped up panic, spread fear and doubt, sought out scapegoats, and behaved irresponsibly at every turn because it served its financial and ideological agendas. The last thing America needs is for hardworking people to be forced out of a job while the media gets a free pass.

It’s unjust and unfair for small businesses to have to shut their doors, while CNN goes on with business as usual. It’s wrong for the average American to be told he’s non-essential, but that Jim Acosta is.

President Trump should trash the media’s demand for an exemption from shutdown rules. And people should begin asking some tough questions about why they’re out of a job while the media swarms press briefings, sticks microphones in front of health care workers and children, and isn’t held accountable.

We Have Much to be Thankful For During COVID-19

Emery McClendon: I Support President Trump and Ask You To Do The Same