Last year, New York City Health Commissioner Oxiris Barbot was warning that “even brief contact with the police or indirect exposure is associated with lasting harm to people’s physical and mental health”. 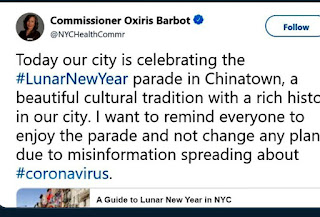 “We as a public health department have really been trying to frame criminal justice system involvement as an exposure,” Barbot’s epidemiologist, Kimberly Zweig, claimed.

Zweig had a degree in epidemiology, but her focus was entirely on PTSD and stress. Not on disease.

Why was New York City so badly unprepared for the arrival of the coronavirus? The answer was radical politics. And Barbot and Zweig embodied the public health mismanagement of a radical administration.

Commissioner Oxiris Barbot, the disgraced figure at the center of the city’s coronavirus meltdown, had graduated from the University of Medicine and Dentistry of New Jersey in 1991. She had worked as a pediatrician, before being selected as the Medical Director for the Office of School Health in New York in 2003. Her qualification for the job was unclear and her bio doesn’t list any administrative degrees.

In 2010, Mayor Stephanie Rawlings-Blake chose Barbot as Baltimore’s health commissioner. Blake would later become infamous for announcing that she had given the city’s race rioters “space to destroy”.

The city’s murder rate has continued hitting new highs since.

A few years later, Barbot came back to New York City and began working her way up through the Department of Health. When she was named Health Commissioner last year, the big news was that the city had its “first Latina commissioner” who had come out the Bronx housing projects.

Barbot succeeded Mary T. Bassett: a 17-year veteran of the University of Zimbabwe. Bassett had launched the Center for Health Equity and spent her time warning of the public health threat from racism in talks, “Why Your Doctor Should Care About Social Justice”, articles, “How Does Racism Affect Your Health”, and research papers, “Uprooting Institutionalized Racism as Public Health Practice.”

As Health Commissioner, Barbot’s bio boasted that “she uses a racial equity lens” and credited her with “spearheading the creation of the Center for Health Equity which operationalizes the Department’s commitment to racial justice.”

As the coronavirus bore down on New York City, Barbot and the Health Department were busy operationalizing social justice while remaining oblivious to the scientific realities of the pandemic. The department’s focus on health equity required it to discourage recent arrivals from Wuhan from going into self-quarantine or avoiding large public gatherings like the Lunar New Year celebrations.

“We are very clear: We wish New Yorkers a Happy Lunar New Year and we encourage people to spend time with their families and go about their celebration,” Barbot insisted.

“As we gear up to celebrate the #LunarNewYear in NYC, I want to assure New Yorkers that there is no reason for anyone to change their holiday plans, avoid the subway, or certain parts of the city because of #coronavirus,” she insisted.

By then there had already been over 17,000 cases of the Wuhan Virus in China with nearly 3,000 new cases in one day. For the first time, someone outside Mainland China had died of the disease.

Manhattan’s Chinatown, where Barbot had appeared, is one of the densest parts of the city. The old core community where the Lunar New Year celebration is based is a maze of cramped tenements, narrow streets, tiny stores whose counters extend far into the street, and other unsafe conditions

Barbot went on urging people to participate in the parade while spreading misinformation about the risk. “You won’t get it merely from riding the subways – you get it from secretions,” she even claimed.

The commissioner went on with the happy talk in March.

After the first coronavirus case in the city, she claimed that “disease detectives” would prevent the spread of the coronavirus and that New Yorkers were “at low risk”.

“As we confront this emerging outbreak, we need to separate facts from fear, and guard against stigma and panic,” Commissioner Barbot signed off: warning that the real enemy was prejudice.

“There’s no indication that being in a car, being in the subways with someone who’s potentially sick is a risk factor,” she told New Yorkers.

Four days later, she finally admitted, “It’s not just prolonged household contact as we initially thought. We have evidence that there are other types of interactions that can occur that can transmit the virus.”

Barbot and her boss, Mayor Bill de Blasio, had been spreading dangerous nonsense with no scientific basis. When asked about some of her claims at a press conference, she said, “This is a novel virus that we’re still learning a lot about.”

That was better than Bill de Blasio who, when asked how Barbot’s Department of Health had decided that the virus dies quickly in the air, rambled, “All information is valuable, but the information that we’re gleaning from our own direct experience is the most valuable to us.”

Had New York City’s health authorities lost their minds? Not exactly. They had enveloped their medical decisions in a fog of identity politics pseudoscience which had redefined medicine around equity.

That was Barbot’s real job. The obsession with equity in everything had been the signature of the entire De Blasio administration. Just as Marxists had used class as the master theory explaining all the problems of human history, radicals in this country had redefined racism as the explanation for all ills.

To Barbot and De Blasio, the coronavirus wasn’t the real threat, racism was. Their job was to suppress overreaction to the coronavirus by persuading New Yorkers that there was no real risk of contagion.

The actual science, objective research, was irrelevant compared to the city’s own truths about racism.

In the midst of the pandemic, this may seem inconceivable, but all that happened was that New York City’s leaders applied the same approach to the coronavirus that they had used for crime and terrorism.

When it came to terrorism and crime, the policy had been to minimize the risk, cover up actual cases and to warn against prejudice toward communities likely to engage in crime or terrorism. This approach had failed miserably in preventing crime or terrorism, but the actual scale of the damage had not been so devastating as to actually make a major dent in daily life in New York City.

“This new U = U campaign underscores the fact that people living with HIV have more choices than ever before,” Health Commissioner Dr. Oxiris Barbot boasted. “With a sexual health plan that includes taking HIV medication, regular medical care, and using condoms, New Yorkers with HIV can live long, fulfilling, and healthy lives with the options they have now.”

“People living with HIV are lovable, touchable, and should feel confident that, with effective treatment, they can live free of the concern of transmitting the virus,” Dr. Demetre Daskalakis, Deputy Commissioner for the Health Department’s Division of Disease Control added.

The difference with coronavirus was how quickly the risk of a disease outbreak turned into the reality.

New York City’s politicized government had inhabited its own bubble in which filling the streets with criminals, protecting terrorists and illegal aliens, or encouraging unsafe sex, was ideologically correct. And the casualties of this ideological destruction, whether bicycling tourists in Manhattan, young gay men, or young women in Central Park, were easy enough to bury in press releases full of Newspeak.

But the coronavirus crisis did not work that way. And Barbot and De Blasio were behind the curve. The radicals running the city were not only out of step with science, but with the rest of the country.

By the time reality, in the form of angry editorials, state action, local protests, intruded, it was too late.

The coronavirus outbreak has exploded in New York City. And everyone has gone all in on the cover-up. The inept De Blasio administration, which didn’t bother ordering protective equipment until March, when it was still assuring New Yorkers that there was nothing to worry about, has been blaming Trump.

But that’s a mistake.

The coronavirus pandemic contains important lessons. Trying to suppress those lessons will carry an even heavier price. The price can be postponed, but the interest rate on it will be even higher.

New York City’s dense grid, its cramped public transportation, and large foreign population put it at risk, but it was an ideological contempt for objective science by identity politics radicals that left it naked.

The Chinese Communist leadership had refused to believe that a virus could take off in their perfect system. Ideology blinded them to the outbreak the same way it did their leftist counterparts in New York City who were obsessed with making sure that the Lunar New Year celebrations went forward in their perfect utopia to prove that science doesn’t matter and that the only real virus is racism.

Mayor Bill de Blasio had dismantled the city’s Department of Health, replacing its personnel with unqualified hacks whose job was to medicalize social justice, and warn of the public health threats of the police, or hair discrimination, while assuring city residents that they had nothing to fear from COVID-19.

Can Corona Virus Kill the City?

Which is Worse: A Tyrannical Government or a Virus?