On April 9th, as California passed 500 Wuhan Virus deaths and 19,000 cases, Senator Dianne Feinstein dispatched a letter on Senate stationary to the President of the United States.

The letter did not ask for help for California, but for Iran. 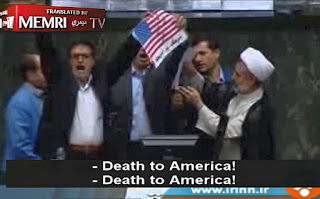 Senator Feinstein wrote to express her unhappiness that President Trump had blocked Iran from getting $5 billion from the International Monetary Fund. She urged him to help the Islamic terror state, which has murdered countless Americans, get the money in the “interests of international security”.

While Americans were dying, the Senate Terror Caucus was hard at work… for Iran.

Two days earlier, Leahy, Udall, Carper, Brown, Merkeley, and Van Hollen had sent another letter to the Secretary of State on behalf of Hamas, claiming that “as of March 24, the first two cases of COVID-19 were confirmed in the Gaza Strip” and insisted that it is, “in the national security interest of the United States” to help the Hamas territory.

The only reason Bernie Sanders hadn’t signed the Tehran Six letter was that he thought that it didn’t go far enough. Instead he joined Rep. Alexandria Ocasio-Cortez, Rep. Ilhan Omar, Rep. Rashida Tlaib, and other terrorist supporters in calling for a suspension of sanctions on Iran.

In an embarrassing moment, the draft text of the letter was posted on the website of NIAC: described by many as the Iran Lobby in the United States. Earlier this year, Senator Tom Cotton, Senator Ted Cruz, and Senator Mike Braun had sent their own letter asking Attorney General Barr to investigate NIAC for acting as an agent of the Islamic Republic.

While Republicans wanted to hold NIAC accountable, Democrats were collaborating with it.

After Iran’s attack on our military bases, Sanders and Warren had participated in a conference call with NIAC. House Dem participants had included Rep. Ro Khanna and Rep. Barbara Lee.

The Democrats who met with Zarif included members of the Tehran Six, Senator Murphy, who had initiated the Iran letter, and Merkeley, and Van Hollen. Murphy has spoken at NIAC events and the Iran Lobby group had described the Democrat as a “fearless ally” of its cause.

Lobbying for an Islamic terror state during a pandemic is “fearless” all right.

While the calls for suspending sanctions were couched in claims that Iran needed to be able to fight the Wuhan Virus, the proposals by Tehran Democrats went far beyond the virus.

The Sanders-Cortez-Omar letter demanded a suspension of sanctions that would “encompass major sectors of the Iranian economy, including those impacting civilian industries, Iran’s banking sector and exports of oil.”

Why does Iran need to export oil to fight the coronavirus?

In total, 34 House and Senate Democrats, had signed an Iran Lobby letter during one of the worst crises in American history, where many of their own constituents were dead or dying.

While the Sanders letter had started out as an extreme position, a few days later, Joe Biden, the presumptive Democrat nominee, urged President Trump to ease sanctions on Iran and “streamline channels for banking”. The beneficiaries of such measures wouldn’t be ordinary Iranians, but the regime’s terror elite and their international financial partners.

Within the space of a week, a fringe position advocated by Sanders, Cortez, and Omar had become incorporated into the official stance of the Democrat nominee for the White House.

The rapid pace at which suspending sanctions and sending billions to an Islamic terror state had become a mainstream position conveyed the incredible influence of the Iran Lobby on D.C. There are only two or so Senate and House Republicans who lobby for Iran, but a multitude of Democrats who don’t even bother asking, “how high” when the Iran Lobby tells them to jump.

To measure the scope of that influence, 6 out of 10 Democrat members of the Senate Foreign Relations Committee had signed their names to some version of the Iran Lobby letters.

In the middle of a nationwide pandemic, the Iran Lobby was able to swiftly corral House and Senate Democrats into dispatching multiple letters as part of their pressure campaign.

There are two Americas. There’s the country we know and the bubble in Washington D.C.

During a pandemic, top Democrats were ignoring their dying constituents while laboring frantically to meet the demands of the Iran Lobby.

Whom do these Democrats serve?

While their letters insisted that American national interests were served by suspending sanctions on an Islamic terror state, giving it access to the banking system, and letting it export oil, none of this was in our interest, but in the interests of some of our worst enemies.

The Terror Caucus consists of many of the same members who put the interests of terrorists ahead of Americans. Rep. Ilhan Omar and Rep. Rashida Tlaib are only some of the more visible figures among bland Terror Caucus members who often represent Islamic constituencies. And since South Carolina, Omar’s ally, Rep. Jim Clyburn, the Farrakhan fan who handed the state to Joe Biden, is increasingly setting the tone for the Biden campaign.

The Terror Caucus is not a minority among the Democrats. It is driving the clown car off the cliff.

After the attacks of September 11, Joe Biden proposed, “this would be a good time to send, no strings attached, a check for $200 million to Iran.”

His future boss would go on to illegally send billions in foreign currency on unmarked planes.

But Biden’s remark didn’t come out of nowhere. In 2002, shortly after his $200 million check proposal, he addressed the American Iranian Council. The AIC had been founded by Housang Amirahmadi, who ran for the presidency of Iran. Three times. Later that year, Biden was raising big money from Iran supporters and urging that Iran be allowed to join the WTO.

Biden is not a pawn of the Terror Caucus. He’s a founding member.

Joe Biden had celebrated the Islamic takeover of Iran. During the Iran Hostage Crisis, he had opposed the rescue of American hostages. In the nineties, he had called for an end to US broadcasts into Iran.

After his old boss.

Nothing conveys the deep corruption of the Terror Cause better than the frenzied Democrat lobbying for Iran in the midst of a national crisis. Even while Biden and Bernie were still battling for the nomination, they took time from their schedules to lobby for sanctions relief for Iran.

The Democrat Terror Caucus isn’t just selling out this country it’s putting terrorists ahead of Americans. At a time when President Trump and Republicans have put everything into fighting the Wuhan Virus, the Democrats are fighting just as hard to get more money to Iran.

If this is what the Terror Caucus does during a pandemic, imagine what it will do afterward.

Anne-Marie Waters: Coronavirus and the Dire Threat of China