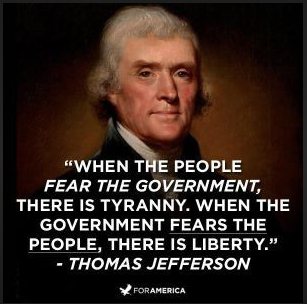 Our response to the coronavirus represents the biggest challenge to the relationship between individuals and the government in this country since the Civil War, WW1 or WW2. These decisions will likely be debated by scholars and historians the way that the Habeas Corpus Suspension Act, the Espionage Act, Japanese internment camps, and other emergency decisions continue to be litigated.

A generation ago, the ACLU might have had something to say about the civil liberties implications of shelter-in-place orders. That was a different ACLU that at least pretended to care about civil liberties as an objective value, defending the civil rights of people it disagreed with. The new ACLU is an identity politics zombie whose only civil liberties concerns for the coronavirus response is that illegal aliens won’t be able to enter the country and that prison inmates should be released as quickly as possible.

The ACLU’s position on the coronavirus is that, “individual rights must sometimes give way to the greater good. After all, when it comes to disease, we are not just individuals but also one big bio-mass.”

“A disease cares little for our notions of individualism,” the former civil liberties organization argues.

That is no doubt true. But we don’t run our society from the perspective of a disease. And we don’t ask civil libertarians to mind-meld with viruses. Once upon a time, the ACLU might have asked what the Constitution thought of a policy. Now it asks what a disease thinks of the United States of America. And to the disease, the ACLU, and the Left, we’re one big bio-mass collective with no room for individualism.

Meanwhile the ACLU has missed the civil liberties debate over what an “essential” establishment is. Shelter-in-place and other variants of the same term list the local definition of what is considered an essential or non-essential establishment. There is, as of yet, no formal federal definition.

Are liquor stores essential? They are in New York, New Jersey, St. Louis and Michigan. But not in Pennsylvania. Pot stores were deemed essential in California, New Jersey, and Massachusetts.

But the “essential” debate is really blowing up when it comes to firearms.

“We will be closing them, they are not an essential function,” Villanueva insisted. “You have the mixture of people that are not formerly gun owners and you have a lot more people at home and anytime you introduce a firearm in a home… it increases fourfold the chance that someone is gonna get shot.”

Whether or not that’s true, it has nothing to do with whether gun stores are essential or not. Villanueva is wrongly conflating a gun control risk argument with defining what is an essential business.

And when thousands of criminals are set loose, firearms become more essential than ever.

Villanueva has since backed off, and Second Amendment groups have launched legal challenges to the ‘non-essentializing’ of firearms stores.

While Illinois had deemed firearms businesses to be essential, Pennsylvania did not. The state’s version of “essential” or “life-sustaining”, like California, covers marijuana, but not firearms. That’s a problem since Philly authorities had announced that they wouldn’t be arresting “non-violent offenders”.

Non-violent offenders, a highly misleading term for a wide variety of some, potentially quite hostile and dangerous criminals, includes car theft, burglary and other threats to personal property.

The Pennsylvania Supreme Court heard a case by a gun shop owner and split, with the majority upholding the Democrat shutdown of gun stores in the state, while a minority dissented, arguing, that it’s, “an absolute and indefinite prohibition upon the acquisition of firearms by the citizens of this commonwealth — a result in clear tension with the Second Amendment”

Meanwhile, on the other side of the political dial, Louisiana, Ohio, and Texas classified abortions as non-essential, though Ohio abortion facilities don’t appear to actually be obeying orders to close down.

To people on one side, one of them is the footprint of a murderous industry that shouldn’t even exist and on the other is a constitutionally protected right. Litigation over both sides and both industries has been fought endlessly, but is now being settled by fiat under the guise of emergency measures.

That’s the civil liberties problem with giving government unlimited emergency powers to shut down everything it wants to with very little scrutiny and no meaningful appeal against its decisions.

There is an emergency. But civil rights don’t disappear in emergencies. They matter more than ever.

The use of emergency powers allow government to strip away individual rights with very little oversight. And it’s inevitable that, as in Los Angeles County, those powers will be used for self-serving reasons.

In an emergency, it’s vital to keep government honest by questioning how it uses its powers, examining its motives for using those powers, and pushing to set limits on these emergency powers. The tension between emergency powers and civil liberties is the cauldron out of which freedom is constantly reborn.

When the government is gifted with the power to shut down anything in an emergency, its officials will make those decisions along the lines of their preconceived cultural, moral, and political views.

Even when the effect is to override existing civil liberties.

The debate over the shutdowns has been presented as a utilitarian contest between lives and the economy: balancing the risk to people and the risk to their ability to earn a living. But beyond the utilitarian debates and the numbers, of unemployment figures, and projected casualties, are the intangible moral and cultural factors that may well mark this nation even generations afterward.

Every emergency violation of civil liberties has left its scars on America. Including the Civil War. If this time is to be different, we must learn the lessons of those pasts before they turn into the new present.

No society is free all the time. But the difference between a free and unfree society is that a free society keeps asking challenging questions even during periods when civil liberties have been suspended. And by asking questions, its citizens work to keep this state of affairs an aberration, not the new normal.

When people become reflexively used to obeying orders, to jumping without asking any questions, then the crisis response becomes a new cultural norm. That’s why the fight to protect civil liberties from shutdown orders should not wait until the crisis is over. Even now may already be too late.

This is not the time to stop asking questions, but to start asking them.

Because civil liberties don’t stop mattering during a pandemic. They matter now more than ever.

Dr. Fred Eichelman: Can Full News Coverage Be Too Full?