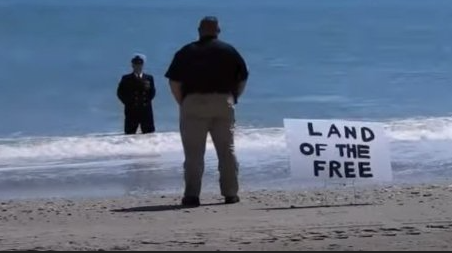 In the past month, Americans have learned a lot about themselves and their country, some good, some not so good. We have learned that in times of crisis, Americans do what they do best, help one another. We have also learned just how quickly the government can and will swoop in and chip away at our God-given Constitutional rights, and that we are more than willing to let them.

More and more people are beginning to talk about this, and those same people are asking more questions, out loud, about just exactly how we got here. They want to know why we stripped Americans of their rights, and shut down one of the most robust economic times in American history based on models and information that are rapidly coming into question. But as with many things that people have differing opinions on, the people who may not share the popular opinion are vilified and their reasons for thinking the way they do are called into question.

Americans just celebrated Easter. Most celebrated not in their usual houses of worship, but because of stay-at-home orders issued by state Governors, and social distancing rules, they sat in front of a computer screen attending a virtual service. In Mississippi, a Pastor who was to hold a “drive-thru” service was greeted by the local police, attempting to disperse the people who had shown up.

What? Wait, it gets better. In Kentucky, by order of the Governor, Kentucky State Police were ordered to write down license plate numbers and fine those who had showed up for an Easter Sunday service. The church parking lot was also strewn with nails. Local governments are encouraging residents to “snitch” on neighbors and businesses who defy orders of no gatherings over 10 people. In St. Louis County Missouri, one of the largest counties in the state, and one that neighbors St. Louis city itself, has a population of 998,692 residents. Nine hundred and twelve people have made such reports on the advisement of County leaders. Could this be proof that Americans desperately need to return to work?

Political correctness is taking over in a myriad of ways that Americans are dealing with each other through this situation. If you are one of many Americans who feel that, yes, this is a serious thing, and they will use common sense and take the precautions they must, but do not feel they need to wear a mask or gloves in order to be safe, and go to a grocery store or go out to do other errands, you do so at the risk of getting a lot of dirty looks, being harassed and told that you do not care if people die. And don’t you dare question the “experts”. Yes, it is now officially socially acceptable to insert yourself into a total stranger’s business, all in the name of “safety”.

For people old enough to remember the beginning of the AIDS epidemic, as the illness spread and more people were affected by it, it became both a political and social statement to wear a red ribbon. That ribbon told the world that you cared. And it was very important to you that other people knew you cared. Those simple red ribbons soon morphed to include other illnesses and causes, breast cancer awareness, domestic violence, and many other things. And while most people might not take a lot of what is advertised on social media seriously, a website called Coolyulify.com was advertising a “hot sale” on, wait for it, designer masks. One picture shows a twenty-something young man sporting his brand-new Louis Vuitton mask. By the way, if you order 4, free shipping. What could go wrong? Show the world you ‘care’, and look great doing it!

What is not yet being seen in many places is the fact that more and more people are deciding to resist the over reaching of their local and state governments. If you look in the right places, there is a silent movement brewing. What both medical “experts” and government officials do not realize, is that they are not going to be able to keep their thumb on the American people for very much longer. They are realizing what is happening to them, and they are beginning to ask more questions. Are they the new resistance?  As of this writing, there are protests going on all over the nation at several State Capitols where citizens are demanding that their Governors reopen their states and stop stripping citizens of their constitutional rights. What will be the tipping point, the actions of government that will push the majority of Americans to demand their country back? How bad and draconian will it have to be?

This ceased to be about a virus long ago.

If You Hate Israel, You're No Friend of the Jews

Are We Really "In This Together"?