Every day that goes by since the beginning of this Covid-19 situation, it seems that more and more documents and report come out that cast doubt on the veracity of those who are controlling our lives to increasingly dangerous degrees.  I try, wherever possible, to avoid the so-called “conspiracy theories” or “paranoid thinking” but somethings (as the old saying goes) “Paranoid people have enemies, too.”

In the present case, the origins and potential purposes for the virus itself as well as the methods used to combat it come more and more into question.  The degree of “prevention” seems to be just the reverse of another old saying, “An ounce of prevention is worth a pound of cure.”  In this case it appears that the ounce and the pound may have well been reversed.

As reported (here) by The Blaze, a new study out of Stanford University (certainly not an institution that has a reputation for wild claims), a respected research facility, represents their efforts to pin down a more accurate estimate of the number of people in the US who have been infected with the virus. It paints an entirely different picture than what we are hearing daily from Washington and many state capitals.

The results of a test of over 3,000 people in CA showed that about 3.3% had anti-bodies for the Covid-19 strain.  When you extrapolate that mean percentage to states and the country, it takes the mortality rate for this outbreak down well under 0.5% which brings it into the realm of typical flu seasons.

What you have to ask yourself is: How many “coincidences” are too many?

A laboratory only a few blocks from a so-called “wet market” in China that has been studying similar viruses and was funded in part by a questionable grant of over $3 million from the Obama Administration that violated existing laws regarding the money used for such purposes. Add to that the fact that China locked down the province when the outbreak first occurred but failed to restrict departing international flights to all parts of the world including the United States.

One report offers an interesting piece of information that might explain how it started. The report suggested that researcher personnel in China are not nearly as well-paid as in other parts of the world. Because of that, it was said that some researchers supplement their income by selling lab animals after their usefulness to the lab is exhausted. With that “wet market” only blocks away, could that be how the virus made it out of the lab? 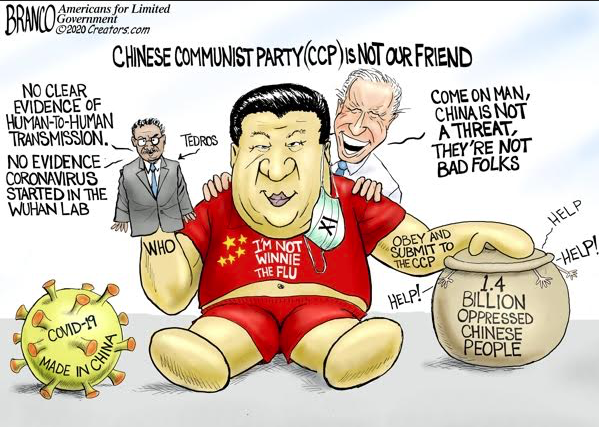 Assuming that the virus escaped from the lab by accident or the above practice, China still had much to gain from having it spread to the United States, in particular.  What better opportunity to create economic chaos in our country? The markets drop 20% and China buys up stock (and increases their influence) of American businesses to their advantage while watching our country flounder in our attempts to control the virus.

Everything points to, at the very least, a malicious taking of advantage of a poorly orchestrated response to their lab’s failures. Of course, there is also the possibility that this was a deliberately engineered agent released on the world for the Chinese Communist Party’s gain.

It is unlikely that we will ever be able to know for sure what caused the virus, but as the recent study mentioned above indicates, our over-reaction to it has done exactly what the CCP would have wanted: Economic damage at the height of trade negotiations between our two countries.

On this side of the Pacific Ocean, it is yet to be determined just how much damage all this will do to us, but one thing is certain… if the sequestration measures are not released soon, the virus will seem like small potatoes when compared to the damage that a decade-long depression will do. For all our technical and medical expertise, some common sense appears to be severely lacking among our governors who have taken steps based on CYA (covering [their butts]) rather than rational thinking.

Prayers for a return to that rational thinking are necessary.  Please help in that regard.

How Can America Remain Secure In This Age Of Political Ignorance?

The Ultimate Sacrifice and the True Heroes of America