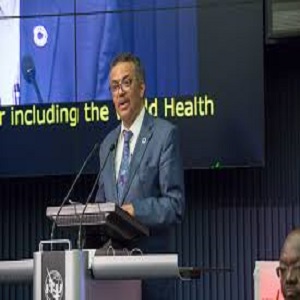 Dr. Tedros Adhanom Ghebreyesus is the name of the top global health official. But what do we know about this man? The globalization-favoring leftist mainstream media has been silent, apparently reluctant to investigate the total lack of qualifications of this man for the role. They give him the moniker of “Doctor”, but he is not really a doctor at all. In fact, he is the first World Health Organization Director-General without a medical degree. He has never cured a patient in his life. He has a diploma in public health, but even this could not cover his dangerous incompetence as Ethiopia’s Health Minister.

There is growing unhappiness with this man following the disastrous virus crisis. Prominent US senators Ted Cruz and Marco Rubio joined the global call for Doctor WHO’s removal. Rubio accused him, with reasonable cause, of pandering to Communist Beijing who, through the office of Dr. WHO, misled the global community. Tedros echoed China’s false claim that the virus had no human-to-human transmission. In other words, he was the global mouthpiece for Chinese lies.

Former US Ambassador to the UN, Nikki Haley, tweeted about Tedros’s unquestioning promotion of Chinese lies. “This was posted by the WHO on January 14, that the WHO found no clear evidence of human-to-human transmission of the coronavirus.” The World Health Organization didn’t find any because they didn’t look. Tedros Adhanom simply chanted China’s disinformation.

Because Tedros echoed China’s lies, the global communities lost vital weeks in evaluating and fighting the pandemic to the cost of 100,000 lives and widespread economic ruin, a global ruin that is benefiting China’s Belt and Road foreign and economic global policy. Not only does China have a global responsibility to come clean, so does the WHO. But who is going to keep their feet to the fire? The United Nations? Forget it!

In early April, while the China pandemic was raging from country to country, China was elected to sit on the UN Human Rights Council panel, a committee that decides who is a human rights abuser. Any bets that China will be excluded from such a list no matter how many of their citizens were abused, silenced, welded into infected apartment buildings to die, or made to disappear throughout China’s national epidemic.

In February, Tedros, the Chinese front man at the World Health Organization, said there was no need to impose travel restrictions on China. He insisted that measures to restrict travel and trade were “unnecessary” in trying to halt the spread of the virus. This as hospitals and cemeteries were filling with the victims of the Chinese pandemic. In February and March, as the world was reeling from the Chinese virus, Tedros continued to praise the Beijing regime. In February he said, “I was so impressed with my meeting with President Xi and his commitment to take serious measures to prevent the spread of the virus to other countries.” What “serious measures” was he referring too? We haven’t seen any. Was this China apologist aware that China had blocked internal travel within their own country, yet allowed the massive departure of millions of Chinese to spread the virus around the world?

So, who is this Doctor WHO? US Senator, Tom Cotton, gives us a clue when he said “never trust a communist.” Was he referring to China? Or was he referring to Tedros Adhanom? How did this little known community health official get to be elected to the top global health position? He had backers, the main one being the Communist regime of China who helped him whip the votes of other nations.  It was China’s role that defeated the candidacy of Tedros’s rival, UK’s David Nabarro.

His launch pad was as Health Minister of Ethiopia. His record in this job was controversial. In fact, it should have been the reason why he should never have been the head of the WHO in the first place, but China intervened with the acquiescence of too many Western governments. The dark secret is that non-doctor Tedros Adhanom covered up another epidemic. The Ethiopian Health Ministry under his watch was suspected of hiding three separate cases of cholera. Lightning strikes twice, or in Dr. WHO’s case, four times, it seems. And he gets away with it.

So what is the link between this failed Ethiopian Health Minister and the mighty Peoples Republic of China? It is twofold. The wife of China’s President XI is a goodwill ambassador of the World Health Organization, a role she has held for many years to keep Chinese interests front and foremost. Tedros Adhanom also served as the Foreign Minister of Ethiopia, and he used that role to extend both national and personal links with the top Chinese elite. Through Adhanom’s role as Foreign Minister, China has loaned over $13 billion to poverty-stricken Ethiopia. That country is now in hock to the Chinese Communists. China knew this man was in their pocket.

In a 2017 report in the Ethiopian News & Views bulletin, Adhanom was accused of committing crimes against humanity, accusing him of a systematic genocide against the Amhara people. Tedros was not only a Marxist. He belonged to a terrorist organization. Tedros’s candidacy for the WHO position was vigorously opposed by several Ethiopian parties based on his political connection and career with the Marxist terror group, the Tigray’s Peoples Liberation Front, who provided millions of dollars from their war chest for his candidacy to the top WHO post, proving that Tedros reached the top of the global greasy pole with the help of a Marxist terror group and a mighty Communist dictatorship.

Tedros Adhanom proposed a kindred ideological spirit, Zimbabwe dictator and fellow Marxist, Robert Mugabe, to become another WHO goodwill ambassador. Mugabe was financed, armed and supported by China when he usurped power in his country. One begins to see the Marxist Communist circles in which Dr. WHO moves. Tedros’s proposal of Mugabe was met with such huge outrage that he had to drop his ally. Under Mugabe’s Marxist rule, Zimbabwe’s health system, like everything else under Mugabe’s dictatorship, was in total collapse.

One would think that such dreadful judgment and lack of qualifications would have disqualified Tedros as head of a world organization. Apparently this doesn’t apply if a global figurehead is the puppet of Communist China. Yet the rest of the international community remains shamefully tight-lipped. It became obvious during the ongoing Wuhan virus crisis that the WHO had become the propaganda arm of China.

The big loser throughout the prolonged virus crisis was the media. Governments relied on information from the World Health Organization who were acting as messengers of the Beijing regime, but the gatekeepers of truth and news were asleep at the wheel. Many American media outlets bashed the president as a racist and xenophobe for imposing a travel ban on Chinese visitors into America while printing the lies of the WHO chief who was defending China.

Another disgraceful incident, which again exposes the umbilical cord between a dominant China and a supine WHO, has been the refusal of the World Health Organization to acknowledge the existence of Taiwan, this at the behest of their Communist masters. In fact, Taiwan has been left in the lurch, to cope with the virus alone. The WHO has not lifted a finger to help Taiwan with the ravages of the Made in China virus, because China put the chokehold on the WHO not to lift a finger to help them. The WHO is so deep in the pocket of Beijing that the Japanese Deputy Prime Minister, Aso Taro, was bold enough to say the WHO should be renamed “The Chinese Health Organization.”

The disgraceful leadership of Tedros Adhanom was apparent as late as March 9 when he denied the China virus had become a pandemic.  In fact, the WHO did not warn the world that it was a pandemic until March 12 proving that the WHO is an unreliable world health watchdog.

This is the legacy of the Marxist failure, Dr. WHO.

Barry Shaw is the International Public Diplomacy Director at the Israel Institute for Strategic Studies.

Democrats: Dirty Politics As Usual, Even During Pandemic