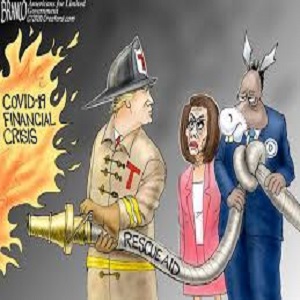 This past Easter we heard from nearly every quarter about the need to unite as a community of one people to fight against the Wuhan Virus. I’m all for unity, and sincerely believe that until we fully accept we are one people united in the cause of freedom for every American, we won’t get past our partisan political squabbles. But does anyone really believe that’s already the case? Can anyone truly say we even agree on the idea of freedom? Or, for that matter, that America’s political, cultural, and media elites are really united to fight for the health and financial well being of Americans?

I don’t think so. Here’s a few recent news items to show you why:

❖ Senator Kamala Harris of California called President Trump a drug pusher because he believes we should authorize the use of Hydroxychloroquine in combination with Azithromycin for those suffering from the Wuhan Vi-rus. “We don’t want a drug pusher as president,” says Senator Harris. Really? I’m no doctor, but If these drugs can improve survival rates with little or no serious side-effects, as some evidence seems to indicate, I think I’d rather take my chances with a drug pusher open to new ideas and scientific reason than Senator Harris who not only doesn’t know what she’s talking about, but won’t admit it.

❖ One of former President Barack Obama’s medical advisors suggested we will need to stay on home lockdown for at least another 12 to 18 months – until a vaccine is produced. This is the same advisor who once claimed Obamacare would make healthcare more available and less expensive. It’s done neither. I wonder how anyone can claim we’re united as a community when the entire leadership of one political party wants to assure the maximum number of families possible are unemployed come November? They’ve made plain that their goal of winning the election is paramount, even if it means wrecking the economy and destroying lives. Unified? Hardly.

❖ Gavin Newsom, Governor of California, took to describing his state as a “nation-state.” His contention is that as the 15th largest economy in the world, California doesn’t need the United States, the federal government, or the values that bind us as Americans. He apparently believes the “People’s Republic of California” would be better off without all those pesky Supreme Court rulings that require him to allow free speech, maintain border security, and accept federal standards of interstate commerce. He especially hates any suggestion that illegal immigrants should not be given citizenship. He claims allegiance to science while insisting sexual identity has no basis in biology. And he sees nothing wrong with imprisoning Californians who use plastic straws, while releasing tens of thousands of convicts from incarceration for committing violent crimes.

❖ The Speaker of the House has unilaterally stopped any additional assistance to keep small businesses operating and their employees receiving paychecks. She insists instead on more money for food stamps, welfare, and free Medicare. Does this show us that Democrats want to make sure workers keep their jobs? Or is it more evidence they want to maximize unemployment and government dependence prior to the November elections.

❖ Though she refuses to help small businesses closed by federal, state, and local governments, she wants to lift the freeze on political pay raises and take a $4,500 raise for herself and other Members of Congress.

❖ “This is a tremendous opportunity to restructure things to fit our vision,” Majority Whip James Clyburn told his fellow Democrats two weeks ago. Sound like a unity message? Not to me.

❖ Democrats are expected to nominate Joe Biden at their convention this August. Joe’s been in government for 40 years as a Congressman, Senator, and Vice President; but his only answer to the coronavirus is to criticize President Trump for not doing what he never did to prepare for a pandemic. Or maybe he just doesn’t remember what he didn’t do.

So is America truly unified? Not on your life. Two hundred and three Democrat members of the House of Representatives have co-authored a law condemning President Trump’s travel ban on terrorist countries. Many of those same Democrats think American taxpayers should supply illegal immigrants the same relief they supply citizens and legal immigrants.

Most have taken to heart Rahm Emmanuel’s quip, “never let a crisis go to waste.” They are demanding a wide array of items on the leftist wish list as their price for supporting Covid-19 relief … money for Planned Parenthood … prohibitions against voter identification rules … Green-New-Deal style environmental programs … expansions to Obamacare … a government say-so on corporate board appointments … enforced diversity programs in companies … many millions more for the arts … college loan forgiveness … and the list goes on and on.

Democrats are clearly using the Wuhan Virus to achieve two goals. First, force Congress and the American people to accept policies they could never pass otherwise that line up with their socialist lurch to the left. And, second, maximize the pain of the American people in order to embarrass and defeat Donald Trump.

It’s surprising to me the party of John F. Kennedy has so easily become the party of Bernie Sanders, Nancy Pelosi, Adam Schiff, and Hillary Clinton. The party that once championed the rights of workers has become a party willing to punish workers in order to foment opposition to Donald Trump. They’ve become the party of the permanent lockdown.

And they’ve done it all while insisting Donald Trump is an authoritarian threat to America’s freedom. It’s a shameful misdirection, but abetted by a progressive mainstream media, it may well work to give Democrats the White House.

We have to fight their dishonesty and tyranny with truth. Let’s take the truth out to anyone who will listen and make sure Americans know what the Democrats’ real agenda is. The only way we’ll beat them is when Donald Trump is re-elected, Republicans expand their majority in the Senate, and we take back the House.

Daniel Greenfield: Idiocy in the Time of the Coronavirus