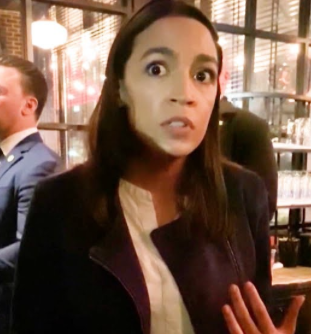 AOC is leading Democrats in Congress on a rampage telling anyone who will listen that illegal immigrants are entitled to receive the same virus relief as Americans.

Others in the media are now parroting the same line of thought, mostly as a way to make Donald Trump look as ogre-like as possible.

They claim equal benefits for illegal immigrants is the compassionate thing to do. But is it fair, is it just, is it right?

Let’s talk hypothetically for a minute. Say you and your family went on vacation and in your absence a group you’d never met, never talked with, and never invited, moved into your home. While there, your home burned to the ground. Then, after you filed an insurance claim, that same group demanded they get half the insurance money.

Democrats led by AOC would say, of course, the poor people who lost their shelter should receive as much of the insurance money as you, the homeowner. And if that didn’t leave you enough to rebuild, well, maybe you should strike a deal with the other group and create a permanent space for them.

Maybe this plan sounds reasonable to you. It certainly seems that way to AOC and most all the Democrats in Congress. To me it sounds ridiculous, unfair, and unjust.

To me, it sounds like their compassion for one group will deprive another of their property.

It’s the same as giving people who broke into our country illegally a share of the money that taxpayers are providing to help Americans get through this crisis.

For a great long time, our courts, legislatures, and Washington representatives have mostly coddled those who have entered the U.S. illegally. Very often they’re educated in our public schools, fed with food stamps, and treated at emergency rooms with little or no cost. We’ve given them drivers’ licenses, and, in some places, we’ve told them it’s OK to vote in local elections.

So with all of this, why shouldn’t they receive the same support as those here legally?

The reason seems obvious to me. They aren’t here legally. Because state and local politicians break the federal law and protect them from arrest or deportation for other crimes they may commit does not make them U.S. citizens. On the contrary, they’re here illegally and until the laws change, that will remain their status.

On the other hand, I’m all for them receiving whatever relief their home countries provide. In fact, given the billions in U.S. dollars immigrants send back to Mexico, Central America and other countries around the world; I’d think their home countries would do everything possible to keep these folks here and ready to work when the economy comes back.

And to clarify things a bit further, liberal Democrats who are forcing the issue of virus relief for illegals aren’t doing so because they actually care about these people.

They’re doing it for the same reason they support looser border security, sanctuary policies, and easy citizenship. They’re doing it because the only thing they care about is getting 20 million more votes for Democrat candidates once those here illegally can vote.

Just consider how Democrat’s mock compassion has worked for black Americans. Democrats have been in charge of nearly all our major cities for decades. For the most part, the schools don’t work, businesses have left, jobs are hard to come by, and crime is rampant.

At the federal level, Democrat policies have left way too many black Americans dependent on big government, victimized by failing schools, and trapped in poverty and hopelessness.

Meanwhile, the “oh-so-compassionate-Democrats” live in fine homes, send their children to high-performing private schools, and regularly exempt themselves from the laws they pass.

Want to live the American dream? My advice is that immigrants apply for entry legally and be welcome with open arms.

Alan Dershowitz: Demonized By the Left for Defending Trump

The Sickness Within the Democrat Party