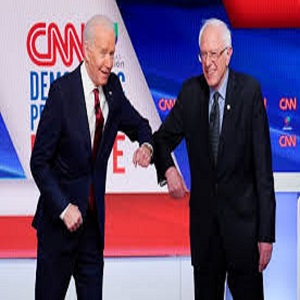 Much ink has been spilled by reporters conferring the mantle of  moderation” on Joe Biden in the last 10 months. But the debate Sunday evening between Biden and Bernie Sanders showed us how much daylight exists between the two Democrat finalists’ political philosophies.

The difference? Not much.

In fact, Biden’s policy proposals would have placed him well out of even the Democrat mainstream just 4 years ago. Based on Sunday’s debate, Biden makes Hillary look like a right winger. Take a look.

Health care. Both Biden and Sanders want government controlled health care.The only real difference is that Biden would strangle private health insurance gradually with a government subsidized option.To the extent slow torture is more moderate than a quick kill, I guess you could call Biden more moderate.

Running mate. Both would choose a woman as their running mate. Given both candidates are pushing 80, this is a critically important choice for each — especially Biden who is clearly suffering from increasing delirium. One presumes Bernie would choose a running mate based on ideology and Biden based more on her ability to bring along one voting block or another. To the degree Biden counts this as more of a practical consideration than an ideological one, he gets a point for “moderation.”

Energy. Both want to end America’s development of fossil fuels. Bernie says he’ll ban fracking period. Biden says he’ll ban any “new” fracking. As a practical matter, it means they’ll both force Americans to bear the huge financial burden of using less efficient and far more expensive “renewable” energy sources (not including nuclear which is the one that actually makes sense.) Abundant natural gas from fracking has not only made us energy independent, it has reduced America’s carbon output by more than every other nation on earth in the last 10 years. Nevertheless, both Biden’s and Bernie’s positions will end the jobs of 100’s of thousands of Americans while returning us to dependence on foreign sources of energy. Neither deserve to be called moderate for their positions, but at least Biden’s approach holds out hope we can fix the situation when the Vice President who replaces him is herself replaced in 4 years.

Education. Both are beholden to labor unions, both want the federal government more involved in local education decisions, both want fewer charter school choices for families. Not a lot of daylight between the two of them on education.

Taxes. Both think people’s money belongs more to the government than to those who earned it. Both will raise taxes on individuals and businesses. And both will add new taxes on things like financial transactions and capital gains. Biden is probably more moderate than Bernie only because his tax plan would wreck the economy more slowly than Bernie’s. If Covid 19 wrecks the economy before a Democrat wins the White House, both would destroy an chance for recovery.

Guns. Bernie has long been more a supporter of gun rights as a Senator from Vermont than Biden has been. Biden has already announced he’ll put Beto O’Rourke in charge of his gun policies. Beto is the one who said he’d confiscate all AR-15’s. Bernie’s said there are constitutional problems with doing that. On this one, Bernie is more moderate, though I suspect if he was ever in charge, he’d support confiscation of guns as socialists who come to power always do.

Immigration. Both want more open borders. Biden says he won’t deport anyone in his first 100 days. Meanwhile both have suggested we should provide free health care and free college, along with more welfare and increased food stamp allowances to illegal immigrants. And both have supported sanctuary policies imposed by progressives across America. Neither is all that moderate when it comes to illegal immigration.

In sum. Biden is quicker to surrender principle and cow-tow to the demands of the far left, while Bernie is more an original thought-leader for the far left. If lack of principle and character can be described as moderate, Biden gets the nod on that point.

But in the end, is there any real difference? Sunday night showed us the answer: not much.

Daniel Greenfield: You Can't Get Hand Sanitizer Because of the Government