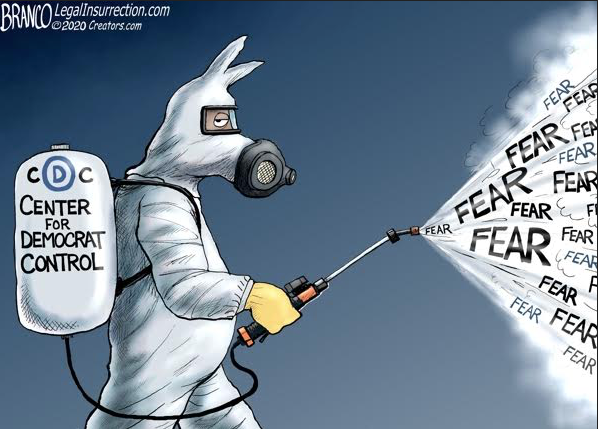 There’s a headline you won’t see on MSNBC. And here’s the rest of the story you won’t hear there.

When the factories in China, South Korea, India and a host of other places close down; they stop producing and shipping the goods our companies need to keep producing.

This isn’t a financial crisis so much as a healthcare crisis that’s causing an economic crisis. The fed lowering rates may add needed liquidity to markets, but it’s not going to stop them from dropping.  That won’t happen till we get some good news that the coronavirus is receding. Here’s why.

Right now, factories across the globe have and are closing as companies and governments work to contain the coronavirus.

A lot of us would be shocked at how much our economy depends on foreign manufacturing. Things like processed chemicals, minerals, paper, metal and wood; some of the components we use to make medicine; and most of the partly or fully assembled parts used in “American-made” cars, computers, and heavy manufacturing and construction equipment.

And it’s not just the goods in the supply chain that businesses need in order to stay open. It’s also many of the products sold in our grocery stores, malls, and even pharmacies. Lots of medicines, furniture, electronics, clothes, shoes, refrigerators, phones, books, tools, and so much more.

The impact spreads beyond manufacturers to every segment of the economy from cruise ships and airlines to malls and restaurants.

The stock prices of all the companies they work for plummet.

It’s a domino effect of failure. But it could be worse.

President Trump took immediate action to shut down arrivals form Asia and stop those most likely to be infected from entering the U.S. That single move limited the number of people who were infected.  He also strengthened our southern border to slow the crossing of illegals who might be infected. For both these acts, he was thoroughly criticized by the left.

The left is also blaming him for the falling stock market and slowing economy, even though they know better — or should.  They’re determined to use this crisis to score as many political points as they can. Even as they point fingers, they refuse to act on Trump’s requests for support to reverse the economic slow down. And other than blame, they’ve offered no real solutions to the growing economic pain.

It’s more than likely even with everything Trump is doing, things will unravel more than we’d like.  Some Americans will die. Many more will get the virus and heal.

It will be worse in most other parts of the world. It’s likely no person anywhere will be spared at least some negative consequence from this pandemic. The left can say what they want about America’s health care system, but in a pandemic like this one, I’d rather be here than anywhere else. America will weather the short term impact of sickness and death far better than most.

But we also need to worry about the longer term impact on our economy and the very real pain a damaged American economy will cause people worldwide long after the virus passes.

Joe Biden, Bernie Sanders, Nancy Pelosi and Chuck Schumer — the most identifiable leaders of the left in America — need to lock politics in the closet for a few weeks, tell their media allies to do the same, and focus on making sure people here and around the world see us working together to solve this problem.

The coronavirus will pass. Our economy will recover. But you can be certain it will all pass much more quickly and less painfully if the left in the media and in government quit using Covid-19 to hammer President Trump.

Khamenei: Jihad is Cure for Coronavirus