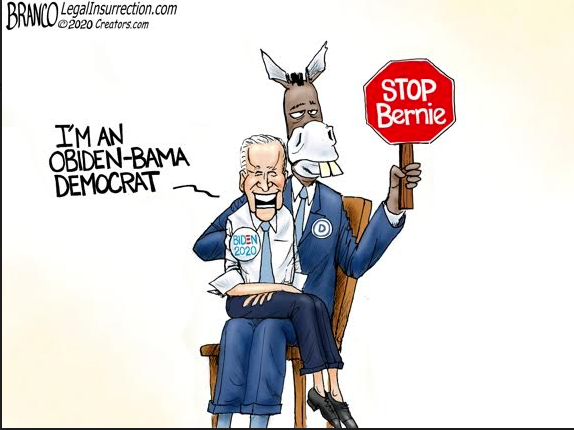 Joe Biden promised that should he win, he will solve every problem from literally curing cancer to eliminating poverty. Here’s the question I’d ask him. If you could keep any of your promises, why haven’t you already done so?

It’s not like poverty, failing schools, serious crime, and cancer haven’t been problems for a very long time. Joe Biden spent more than 50 years in high political office — the House of Representatives, the United States Senate, and finally Vice President.  If Joe could have solved any of the problems he claims he will solve, why hasn’t he done so?

Joe Biden is out of it. From one speech to another, he doesn’t even know what state he’s in. He confuses his sister for his wife. In an interview the other day, he called Chris Wallace Chuck. At one point last week, he even seemed to endorse Donald Trump for re-election before correcting himself.

It’s sad really. I remember listening to Joe Biden’s speeches when I was younger. He could knock it out of the park with his common touch and gentlemanly ways.

Biden seemed to me to represent the better instincts of the Democrat Party — able to appeal to our shared values no matter our partisan loyalties. Joe Biden was a serious political actor.

I don’t mean to pick on old Joe. I really do feel sorry for him, and for what must be his embarrassment every time he says something that betrays his disconnection from reality.

But the truth is I’d feel a lot more sorry for America should Joe Biden become president. It’s not Joe’s fault. All of us get old. But the last thing America needs is a president who’s elevator no longer reaches the top floor.

So why has nearly every member of the Democrat establishment closed ranks behind Joe Biden?  Why, in just a 72 hour period prior to Super Tuesday, did both Pete Buttigieg and Amy Klobuchar drop out of the race and endorse Biden? Why did former candidates Beto O’Rourke, Kamala Harris, and Corey Booker all endorse Joe Biden? And why did Michael Bloomberg call it quits and urge a vote for Biden after investing more than $500 million in his own campaign?

Democrats used to joke they weren’t members of an organized political party. What Democrat consolidation around Biden shows is that their party isn’t just organized, it’s highly regimented.

Seems clear to me they all see Biden as their route to political power under either of two different scenarios.

In the first, they think Trump so weak that even a near victim of dementia will win the election and they will be in position to pull his strings.

Clearly, Joe Biden’s strings are easily pulled.  Every time he was criticized this primary season, he apologized for his past political principles and moved to adapt them. His opposition to school busing, support for a crackdown on crime, past work with segregationists, overly touchy-feely interactions with women, and his opposition to taxpayer funding for abortions were all the subject of Biden’s earnest regret.

It reminds me of something Groucho Marx said, “Those are my principles, and if you don’t like them … well, I have others.”

Seems clear to me that those now so enthusiastically promoting Biden have been promised high political position in his prospective administration.

But given Biden’s disassociation with reality, such an administration is unlikely. No matter, the Democrats behind Biden are just as happy with the second possible scenario, probably the more likely. Under that scenario, they see Biden’s rise, though brief, as their ticket to control of a failed, but still powerful Democrat Party.

The only question is how they account for a large number of very angry and frustrated socialists who rightly believe their hero, Bernie Sanders, was sandbagged for a second time by the Democrat elite.

What do the elites do with that unhappy rabble? Simple. They ingest them by becoming them. And leading them.

Biden’s not the only one whose principles are malleable. The so-called moderate Democrat is about as likely as a unicorn.

The Democrats are whatever they believe they must be to get the power they crave.  If their base demands the middle and upper classes pay for free college, open borders, government-run healthcare, and a socialist New Green Deal; they’re happy to lead the charge. And if it results in America’s destruction, then that’s ok too so long as they’re the one’s standing on top of the rubble in the end.

At this point, they see Joe Biden as their win-win. Sad when you consider they started with 26 Democrat candidates for president. Now, it’s down to a dolt or a Marxist. The Democrat leadership may see the dolt as their short term solution, but once he loses the general election, it’s the far left they’ll have to placate.

Biden’s emergence as the Democrat nominee is not the hope for sanity many political observers think it is. It’s only a speed bump on the road to an eventual socialist takeover of the Democrat Party.

American Coronavirus Pandemic By the Numbers

Khamenei: Jihad is Cure for Coronavirus