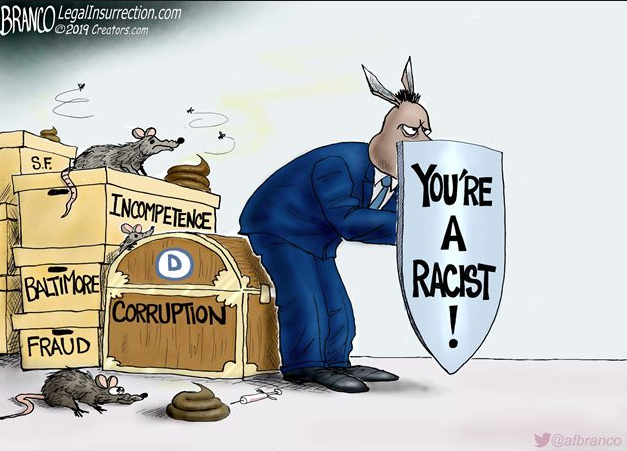 Among the many things the Democrat candidates on the North Carolina debate stage agreed on is that minorities are stupid. Especially black Americans!

That came through loud and clear as they promised free this and free that: terrific schools, meaningful jobs, bigger houses, and out of this world health care.

But time out. Aren’t those exactly the same things Democrats have been promising minorities since the elections of Lyndon Johnson? And how’s that working out for them?

Democrats have had near total control of America’s cities for more than 50 years. They are ongoing disaster areas. Persistent homelessness, failed schools, crime riddled neighborhoods, and chronic poverty.  They’re deserts of hopelessness, despair, and emptiness.

But Democrats insist the only solution is more Democrats. Really? Don’t they think minority voters will see behind the curtain?

But with this election, Democrats are finally going to be held to account for the misery they’ve caused.

In 2014, the grassroots organization I founded ran radio ads on “black” radio stations in the South Carolina special election of Thom Tillis. We pointed out the the  empty promises and deceitful rhetoric of Democrat politicians. We campaigned without fear or favor. And we told the truth: Democrat policies have worked to hurt black Americans; Republican policies provide hope, jobs, and a clear path to opportunity for all Americans including African Americans. It worked. Thom Tillis won at least partly because black voters in record numbers turned out for a Republican.

We returned in 2016, running ads in states critically important to a Trump victory. Three were must-win states for Trump: Florida, Ohio, and North Carolina. Three other states were important, but winning any one of them would likely mean a Trump victory. They were Pennsylvania, Michigan and Wisconsin. Trump won them all — all 6 states. And in the case of Pennsylvania, Michigan, and North Carolina, the black vote Trump received exceeded his margin of victory.

This year, Trump has a stronger story to tell to black and minority voters.  In Trump’s economy, more blacks, Hispanics, and women are working than ever before. More are starting their own businesses.  More are buying their own homes. And wages are rising faster for minority workers than they are for white workers.

Trump’s Education Department is pushing for more high-performing charter schools, especially in the cities where they’re needed most, and where minority families are saddled with under-performing union controlled schools. Democrats, meanwhile, have sided with the unions to oppose charter schools. They’ve mostly come down on the side of closing charters even while their own children attend expensive private schools. How much proof do you need that Democrats care more about teacher unions than about minority kids?

Three recent polls show black support for Trump on the rise. Rasmussen, Marist, and Emerson all show black voters supporting Trump at the rate of 30% or better.  In head-on comparisons with different Democrat candidates, that support tends to drop significantly, but it still hangs in around 15% or better.

This past December, Jack Brewer, the former NFL player for the Vikings, Giants and Eagles predicted in the Washington Times, “Donald Trump will get over 20% of the black vote.” He went on to explain, “There hasn’t been a Republican to even try to go in and talk to the black community. They don’t go there. They don’t even try. I think he’s trying, finally.”

Jack Brewer is right. Trump is the first Republican president in a long while who doesn’t care that Democrats believe they own black and minority voters. Trump knows better, and he’s betting black voters will step up in November to disabuse Democrats of the notion.

Almost everything we heard from the debate floor in South Carolina was out of Lyndon Johnson’s playbook. Pander, promise, presume. Say whatever might get black votes, throw them a few freebies once you’re elected, then sidle up to the real power: the unions, the trial lawyers, and the environmentalists.  Democrats don’t worry about being held accountable for not delivering. They think minority voters are too stupid to know what they’re up to.

But Trump has shown blacks, Hispanics, and women that they don’t have to settle for politicians who make promises they’re too incompetent or too callous to keep … who force their children into failing schools, cause their businesses to close, raise their taxes, and leave them without the means to care for their families.

Minority voters have seen the real difference between Trump and the Democrats. Trump keeps his promises. Trump promised to be the best president since Abe Lincoln for black Americans. And that’s exactly what he’s doing.