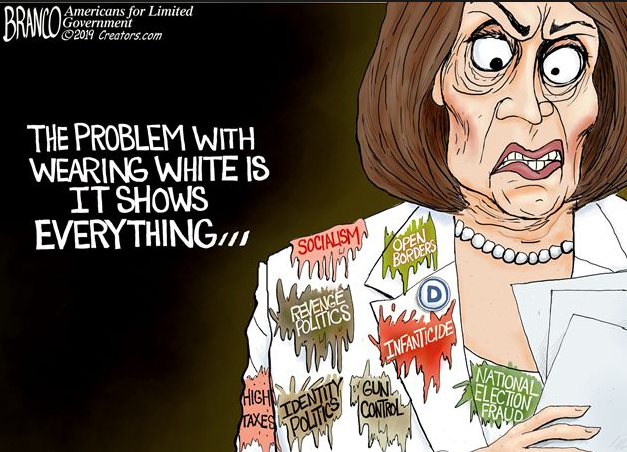 Now that Bernie Sanders is fully on the mat, and Joe Biden is the presumptive Democrat nominee, let’s take stock of the party Biden will soon lead.

First, it’s clear the Democrat Party today barely resembles the party as it existed just 4 years ago.  Biden, the so-called moderate, would have been considered to the very far left of Hillary Clinton.

In addition to an ideological lurch to the far left, just about every single Democrat politician in the country seems absolutely delirious over Donald Trump — hating him, resisting him, defaming him, and removing him.

Nancy Pelosi, the Speaker and ostensible adult in the room, goes apoplectic at the mention of Trump’s name. From frantic accusations of treachery and treason leading to impeachment to ripping up his state of the union address on the eve of his exoneration, she can’t seem to control herself.

Rashida Tlaib, the Congresswoman from Michigan exclaimed on her first day in Congress “we’re going to impeach the mother-fu__er.”  On Donald Trump’s proclaimed day of prayer, she said, “F__k Trump’s day of prayer.” Tlaib’s ire is not entirely reserved for Trump. She’s proven a virulent anti-semitic, Israel-hater who regularly bad-mouth’s almost all things American — our history, our culture, our freedom, our values.

Tlaib, of course, is one of four members of the so-called Squad, a far-left socialist cadre of freshmen women in the U.S. House. But The Squad are just the most vocal and visible members of a Democrat congressional conference who all share pretty much the same big-government-is-good-bigger-government-is-better philosophy.

The Squad tends to occupy the front edge of that philosophy more than most however. The Squad, for example, recently demanded that all convicts held in U.S. jails or prisons be released to protect them from the coronavirus.

No kidding. Let’s endanger 300 plus million Americans by releasing 2 million criminals because those criminals might get sick. They didn’t address how we’d house or feed those 2 million felons, or what should be done with them when they were caught committing additional crimes. Presumably, with all the prisons closed, they’d be returned into society. Details, details.

Yes, members of The Squad are totally unhinged. But, truthfully, their Democrat colleagues are only different by degree. The Squad isn’t actually proposing anything much different than most Democrats support when it comes to sanctuary policies and looser border security.

Nancy Pelosi, who has led the charge in criticizing President Trump’s leadership on COVID-19, tried to sneak an abortion funding clause into a bill  to protect American businesses and their workers from the pandemic. Thank goodness, someone in Washington actually read the bill before it was voted into law. Makes you wonder what else she’s sneaked into legislation during her long history in government.

All of this brings us back to the two finalists for the Democrat nomination: Biden and Bernie.

Joe’s been in Washington DC for 50 years – as a Congressman, U.S. Senator, and finally Vice President. Yet now suddenly, he claims he has the solution to all America’s problems. From cancer to corporate greed, he claims he’ll heal, solve, provide, and fix whatever’s wrong with anybody in need.  That would probably be funny were it not so sad to see him mistake the day, the state he’s in, and which woman standing next to him is his wife.

Then there’s Bernie who has never worked a day in his life as anything other than a professional politician. From his sole perspective as a political hack, perhaps it’s understandable he sees the government as the penultimate and rightful authority over all things.

It would certainly explain why he thinks the government should be in charge of the economy, believes all earnings are government property, and anyone who disagrees is the bad guy and deserves to be shut up. But the government shutting you up is more than a little anti-American. From there, it’s also a very short step to the government locking you up — the preferred solution of every other socialist government in history for dealing with it’s detractors.

No surprise then that Bernie’s solution to the Covid-19 pandemic is a government takeover of most private businesses. He claims that’s the only way to protect workers and keep goods and services pumping. But, once the government has taken over, does anyone think they’d ever surrender their new found control?

I can hardly wait. The government running airlines, car makers, health care, and farms? What could go wrong? It’d be like doing your grocery shopping at the Department of Motor Vehicles, except without the DMV’s kindness and customer service.

Both Biden and Bernie have said they’ll choose a woman to be the V.P. on their ticket. That’s great and I’m more than certain they could find a woman plenty talented enough to handle the job even in the very likely event that woman would have to fill out the rest of their terms. In fact, I’m certain they could find a woman far more talented and able than either of them. But would they? Given their far-left sympathies, I wouldn’t count on it.

Just like the toilet paper shelves at the grocery store today, the Democrat Party is facing an acute scarcity of integrity, good ideas, or the brain power needed to develop either.