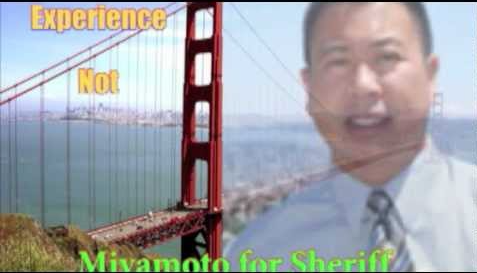 When most Americans think about San Francisco, they probably think about cable cars and Rice-a-Roni, “the San Francisco treat.”  Or, if they’re a little older maybe they recall Tony Bennett leaving his heart there.

You don’t have to have personally visited San Francisco to be familiar with Nob Hill, Fisherman’s Wharf, the Golden Gate Bridge, and Alcatraz Island where some of the country’s most notorious criminals served out their time, or ended it in Alcatraz’s infamous electric chair.

A lot has changed. For one thing, Alcatraz is closed and now the criminals run City Hall.

Why do I say that? Because San Francisco’s leaders don’t believe they’re the least bit beholden to follow the laws of the country.

Paul Miyamoto is San Francisco’s sheriff, the first sheriff in California who is Asian American. He has much to be proud of.

But he should pick up a law book. A few days ago Sheriff Miyamoto announced he would continue San Francisco’s policy of not cooperating with federal law enforcement when illegal immigrants commit crimes in his jurisdiction.

It shouldn’t surprise, San Francisco’s new sheriff was sworn in by California’s far-left Attorney General, Xavier Becerra. The AG too promises he’ll do everything possible to violate federal law when it comes to cooperating with immigration authorities.

And what is the oath AG Becerra administered and Sheriff Miyamoto swore to uphold? It goes like this:

Is it any wonder that the contempt so many of our political leaders show their citizens is now being returned in kind by those they have betrayed?

It’s the toxic attitudes of people like Sheriff Miyamoto that corrode public trust and credibility in our leaders and our institutions. They are destroying our cities – and not just those in California. Detroit, Hartford, Houston, Seattle, Portland, Chicago, Los Angeles, the list almost never ends. Liberals have had their way for decades in America’s largest cities. They’ve turned many into hellholes of homelessness, despair, and hopelessness. You keep wondering when their constituents will hold them to account for the damage they’re doing.

Still, it’s under this president that the leaders of America’s cities have decided federal law should not apply to them. It reminds me of those hateful days in the 50’s and 60’s when state and local politicians stood in school doors to stop black students from entering. They too risked lives and liberty for a narrow and ignorant ideology that claimed only they were righteous.

Miyamoto went so far as to suggest Trump’s policies to incarcerate or deport illegal immigrants who commit crimes like rape, murder, robbery, or assault were akin to FDR’s policy that caused Japanese Americans like his family to be incarcerated during World War II. What??? In what universe is holding criminals responsible for their crimes the same as imprisoning American citizens because of their ethnicity? Such is the twisted reasoning of Democrats these days.

Dear Sheriff, be advised: FDR was also a Democrat.

Of course, we know stupid policies in California don’t stop with illegal immigrants. Politicians there have also passed a law making it a misdemeanor when a thief steals anything less than $950 in value. Walk into a store there and take $949 in food and goods and the cops won’t do a thing about it. How crazy do you have to be to outlaw “protect and serve?” Or how liberal? At some point the two meet to create a crazy liberal that can’t help himself.

Even more amazing to me is that after all their sanctuary nonsense and decriminalization of theft, they’re surprised by rising crime rates, mom and pop shops going out of business, huge numbers of vacancies in police and sheriff departments, and massive numbers of residents fleeing to other states.

Expect them to blame Trump.

San Francisco has gone from one of the most beautiful cities in America to one of the most dysfunctional. And the Sheriff is being set up as the fall guy. When the people get sick enough of the lawlessness, the filth and dirty needles littering the streets, the homeless using gutters as their outhouses, and the illegal immigrants getting free-reign; they’ll demand change. That’s when the political leaders will cut the strings animating puppets like Sheriff Miyamoto. It’s what they’re grooming him for. And, so far at least, he’s dancing right along.

The NPVIC & Why It Should Terrify EVERY AMERICAN Regarding Their Votes