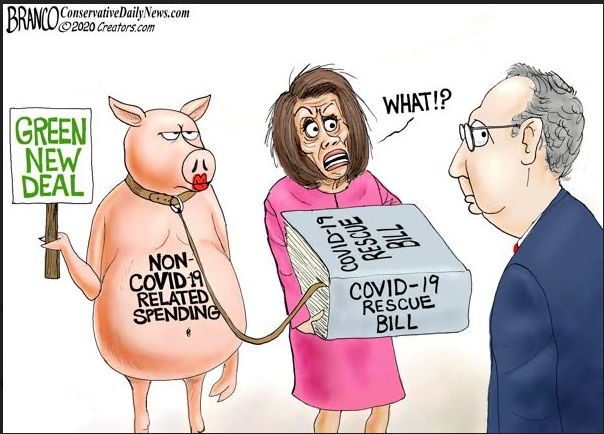 It’s unconscionable to engineer the death of thousands, and destroy the economic well-being of millions, to promote an ideological agenda or win a political campaign.

But that’s exactly what Democrats in Congress nearly did with their first few votes on a Senate bill intended to prevent business closures and save jobs.

Fortunately, Democrats felt the heat from outraged constituents and relented to finally cut a bi-partisan deal.  But that was not their initial instinct. What in the world were they thinking? It’s important we understand exactly why they were willing to risk the well being of millions of Americans.

Take a look at how events unfolded.

Most of last week, Senators from both parties had bargained back and forth to produce a bill intended to help America’s economy — expand unemployment insurance, provide loans to large and small businesses so they don’t have to lay off workers, and make direct payments to American families.

But when the Senate put a bill forward on Sunday night, Senate Democrats voted no. What happened?  Simple, Nancy Pelosi returned to Washington after a few days off and within hours, convinced Schumer they were losing the chance for huge political gains if they agreed to support a Senate Bill that might save the economy.

Pelosi showed Schumer they could both push forward a raft of agenda items supported by AOC’s far-left loyalists – a large plurality of the Democrat Party’s base – and they could also take advantage of a weakened economy and millions of newly unemployed families to embarrass and ultimately beat Donald Trump.

Initially, Pelosi and Schumer insisted a wild list of items be inserted into the legislation before they would agree to support it. Among the items they insisted be inserted include:

You decide. Do any of these things have anything at all to do with stopping the economic devastation that’s on our doorstep?

You may not like Donald Trump; some do, some don’t. But no one in their right mind can deny he has worked tirelessly to attack the Chinese virus and its fallout on our economy in a completely non-partisan way. In fact, he’s received near universal praise from both Democrat and Republican governors for the support and resources he’s provided them.

Pelosi and Schumer weren’t interested in any of that. They saw this crisis as an opportunity for gain and their initial instinct was to use if for everything they could wring out of it.

Understand these two have been feeding off the government trough for decades. They have no idea in the world what businesses need to survive something like this. They don’t have a clue about payrolls, about managing a business or growing anything except the taxes you and I each year.

The thought of returning some of our tax money to those who actually paid it is thoroughly repulsive to them.  They’re far more interested in taking from some to buy the votes of others. It’s really no more complex, and no less corrupt.

And besides, they thought, the longer they could delay relief, the more likely it was our economy would collapse and they would gain a powerful weapon in their war against the re-election of Donald Trump.

Even the leftist media that almost always takes the side of Democrats complained. Working families screamed. Small businesses cried foul. And Donald Trump called Democrats out for their cynical attempt to use this virus crisis for political gain.

But despite their finally coming around, it’s plain Democrats were prepared to see America’s economy destroyed and American lives lost rather than lose a chance to force their agenda and damage the president’s re-election prospects.

Anywhere else, at any other time, we’d call it tyranny. Even evil. No matter who you are or what you believe; if human decency matters to you, then remember in November what Democrats did in this moment. And then vote like your life, and your livelihood, depend on that vote.