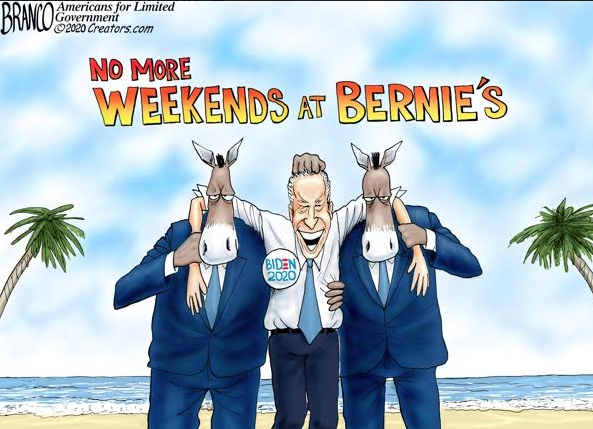 It is no secret that the Democrat Party has a string of dubious track records. We know that every four years the African-American vote is largely taken for granted. We know that there is, shall we say, questionable math that determines how delegates are awarded and how many and to whom, and that is before we get to “superdelegates”. The most recent trend is the Party establishment picking and choosing who the nominee will be behind the scenes. In 2016 of course it was Hillary Clinton’s turn. She had earned it. She had dutifully served her Party as a First Lady, Senator, Secretary of State, and a living embodiment of that classic Tammy Wynette song, “Stand by Your Man”. Yes, it was her time, and the Party was not going to screw that up. As we go through the 2020 primary season, is this scenario getting a repeat?

As of this writing, the Democrat nomination has come down to former Vice-President Joe Biden, and Vermont Senator Bernie Sanders. One of the many things the main stream media will not talk about is the fracture in the Democrat Party. It has come down to the younger whiter “Bernie Bros” whose eyes widen in anticipation of a Sanders administration that promises them free stuff in ways that before now they could only dream about. Then there is the more traditional demographics of Biden supporters. They are a bit older, many of them blue collar workers and union members, and it appears that Biden is getting a big chunk of support from African-Americans. So, who will the Party establishment, the powers-that-be decide whose time has come?

The dirty secret is that it has already happened. Is it any coincidence that within forty-eight hours of Super Tuesday that every other candidate with the exception of Elizabeth Warren, who came days later, and Tulsi Gabbard, who is still hanging on, despite the fact that Democrats are ignoring her, dropped out to clear the way? Not for Bernie Sanders, but for Joe Biden. Yes, it has been determined that now is officially Lunch bucket Joe’s time. There is just one problem, half the time Joe doesn’t seem to know what time it is. It might be Joe’s time alright, time to be the sacrificial lamb for the Democrat Party.

The Party faithful, those who would qualify for “establishment” status know exactly who Bernie Sanders is, and the fact that he could become the face of the Party scares them even more than four more years of Donald Trump. They are well aware that no amount of lipstick that Bernie puts on the socialist pig, what he has fought for his whole life is just that, straight up socialism. And they want to stay as far away from that as possible. That leaves them with Joe Biden. Biden has spent fifty years in Washington with not a lot to show for it. He is a walking gaffe machine everywhere he goes, and many political pundits are seriously questioning his mental faculties. Even some Democrats think that if Joe Biden actually managed to get elected, he would merely be a puppet with perhaps Obama-era puppet masters running the show.

The other thing the media does not want you to know is that people are voting in Republican primaries for President Trump in numbers that have never been seen for an incumbent president before. Many in the know on both sides of the aisle use the word “landslide” when talking about Donald Trump more and more. With people like Mayor Pete, Julian Castro, Stacy Abrams, and even Tulsi Gabbard waiting in the wings, people who definitely have a chance to be  rising stars in the Party, the Democrats may have decided, in secret of course, to write off 2020 with someone they believe they can afford to sacrifice.

Joe Biden is that guy. At 77 years old, this is Joe’s last rodeo. If the Democrats have in fact decided to relieve Bernie Sanders of his presidential aspirations, at 78 it is also Bernie’s last go around. This may be the year the Democrats have decided some house cleaning may be in order. Bernie Sanders knows what happened to him in 2016, and he must have a good idea that history is repeating itself. But the result will be the same. Bernie is not a fighter, he is a pacifist, and will not call out anyone in the Party for their actions.

As the primary season progresses, the Democrat Party will do what they need to in order to prop up Joe Biden and drag him across the finish line. They believe that dragging Joe will drag the Party back from the Left-wing cliff that Bernie Sanders, Alexandria Ocasio-Cortez and others have brought them to the brink of. If making room for the next generation is what the Democrats have in mind, Joe, Bernie, and the rest of their generation might not want to stand to close to the edge of that cliff.

The Imprints of Grace & Evil