When Imam Omar Suleiman appeared at a Bernie rally in Mesquite, TX, the hateful Islamist cleric spoke in front of a backdrop of giant American flags and signs urging donations to Sanders. Before Bernie took the stage, he called for an, “America where we uplift our most vulnerable, celebrate our diversity.”

The Imam did not mention, as he has before, that he believes that, “Zionists are the enemies of God.” 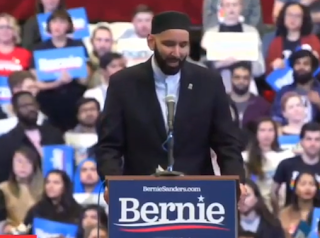 By “god”, the Imam meant Allah. The occasion for that hateful outburst was Operation Protective Edge which began after Hamas kidnapped and murdered three Jewish teenagers. One of them American.

Earlier in the conflict, Omar had tweeted, “God willing on this blessed night as the 3rd Intifada begins, the beginning of the end of Zionism is here. May Allah help us overcome this monster, protect the innocent of the world, and accept the murdered as martyrs. ameen #48kMarch #3rdIntifada.”

He later tweeted, “The people of #Gaza made us proud. You refused to let terror break you and we refuse to let Zionist media silence you.”

When Sanders announced that he was boycotting AIPAC, Imam Omar Suleiman rejoiced.

While Senator Bernie Sanders has insisted that he couldn’t go to AIPAC because of, “the platform AIPAC provides for leaders who express bigotry and oppose basic Palestinian rights”, he was fine with Omar.

Not only did the Imam speak at his Texas rally, but was repeatedly photographed with Bernie Sanders.

Bernie Sanders was providing a platform for a monster who had called for the destruction of Israel, described Jews as the enemies of Allah, and championed another intifada being waged against Israel.

The Hamas charter had already described what the intifada’s outcome would look like in the infamous Islamic hadith. “The time will not come until Muslims will fight the Jews (and kill them); until the Jews hide behind rocks and trees, which will cry: O Muslim! there is a Jew hiding behind me, come on and kill him!”

Omar has appeared at American Muslims for Palestine events. AMP was founded by Hatem Bazian, the godfather of campus anti-Semitism, and founder of SJP, who had allegedly read that same hadith calling for another Holocaust. AMP has also been linked to a variety of Hamas front groups.

AMP’s national director, Osama Abu-Irshaid, had celebrated, “Hamas, whose youth have been renewed by its commitment to its precise principles for liberation” during Operation Protective Edge.

Suleiman had attended MAYA conferences, a hate group that the FBI had described as, “a conduit for money to Hamas . . . and… a forum where Hamas could promote its ideology and recruit new members.” At one MAYA conference, a Hamas leader had told the audience, “Finish off the Israelis. Kill them all. Exterminate them. No peace ever.”

But Imam Omar Suleiman’s hatred went beyond calling for the destruction of Israel.

A year before his Hamas outrage, Imam Suleiman had claimed in a YouTube video that, “If it was not for Bani Israel, meat would not decay.” The hateful cleric was quoting an Islamic hadith which blamed meat going bad on the Jewish people. The Jews had not only beaten Hamas, but had also invented bacteria.

While it’s understandable that Bernie Sanders would be okay with Imam Suleiman’s calls for the destruction of Israel, his campaign has multiple anti-Semitic allies and surrogates, including Linda Sarsour, John Cusack, Amer Zahr, and Rep. Ilhan Omar, but it doesn’t end with the Jews.

“When Allah describes homosexuality as a repugnant shameless sin and details his punishment of a people that practiced sodomy, how can anyone who believes in Allah not find it immoral?” Imam Omar Suleiman had also said.

Had those same remarks been made by a Christian preacher, he would have been swiftly banished. But Suleiman’s comments about gays and women, have gotten the same pass as his anti-Semitism.

And his other politically incorrect fidelity to the brutalities of Islamic custom and law.

“Sisters, you know what happens with a really jealous Dad? He kills you and he kills the guy,” a smiling Imam Suleiman told Muslim female college students at an Islamist youth event. “Even if they don’t have a man who’s going to be a real man, Allah has more than any man.”

A willingness to honor kill your own daughter is the Islamic measure of a “real man”.

“Society’s welfare always takes precedence over the individual’s welfare,” Imam Suleiman had said, when discussing concubines and sex slaves. “It supersedes the outrage of a woman – the very real possibility that a woman in that situation had that option not been there – would have most likely been put in a situation of prostitution.”

And then, making it clear that he was talking about sex slavery of the ISIS variety, he discussed a situation where “a prisoner of war was to come in, if a woman was to come in that situation”.

“The punishment for theft,” Imam Omar Suleiman said at a Sharia Council Panel, “which would be the cutting off of the hand, that’s not just any theft, Allah wants to protect the life of the one who had stolen… but a skilled thief.”

Before defending the Sharia punishment of cutting off the hands of thieves, he had defended stoning men and women for immorality.

But, no one in the media will ask Bernie Sander whether he agrees with Imam Omar Suleiman.

Suleiman has developed a slick routine for American audiences, filled with jokes and pop culture references, even when he’s discussing honor killings and mutilations, but his mentors and theological influences are clerics who defended female genital mutilation and killing Muslims who leave Islam.

Suleiman had called Aid al-Qarni, “one of the greatest scholars and thinkers in the world”.

The Saudi hateful cleric had preached that, “Fighting the Jews and not making peace with them is a religious Islamic duty” and that, “the Jews and the Christians are the enemies of the Muslims and the enemies of Islam.” He claimed that the Jews had killed Lincoln, and called them “apes and pigs”.

“Throats must be slit and skulls must be shattered. This is the path to victory, to shahada, and to sacrifice,” he had ranted.

Bernie Sanders was against the Iraq War. So was Suleiman’s inspiring scholar and thinker.

“I praise the Jihad, the sacrifice and the resistance against the occupiers in Iraq. We curse them every night and pray that Allah will annihilate them, tear them apart, and grant us victory over them,” he had stormed. “The Jihad in Fallujah is a source of pride.”

The Jihadists in Fallujah were the terrorist group that would eventually turn into ISIS.

While Bernie wouldn’t go to AIPAC, he did go to the Islamic Society of North America (ISNA) convention alongside Imam Siraj Wahhaj, an unindicted co-conspirator in the World Trade Center bombing, who had declared, “You know what the punishment is, if a man is found with another man? The Prophet Mohammad said the one who does it and the one to whom it is done to, kill them both.”

Imam Omar Suleiman is also a big fan of Wahhaj, calling him, “my beloved Imam” and gushing, “every time I meet him I feel like a little child meeting his hero.”

While Bernie couldn’t go to AIPAC because he falsely accused the liberal group of providing a platform “for leaders who express bigotry”, he’s okay with ISNA’s platform for killing gay people. And everyone.

Bernie’s ISNA presidential forum was moderated by Salam Al-Marayati, who had defended Hamas and Hezbollah, and justified Hezbollah’s mass murder of Marines in Lebanon.

Water finds its own level. So did Bernie.

Bernie would not be comfortable in a room full of Jewish pro-Israel liberals. He is quite comfortable with progressives like Imam Omar Suleiman, Linda Sarsour, Amer Zahr, and Rep. Ilhan Omar, and their ilk.

The Vermont socialist, who celebrated Castro and the Soviet Union, is not comfortable among Jews. He is very happy being surrounded by bigots and haters who believe in killing Jews, destroying Israel, and then going on to stone gay people, kill women, chop the hands of thieves, and murder Americans.

There’s no room for Bernie at AIPAC. Or at any Jewish forum. And, if he’s the nominee, there will be no room for Jews in the Democrat Party unless they’re willing to act as accomplices to the murder of Jews.

Top 10 Reasons Why Democrat Candidates Should Terrify You