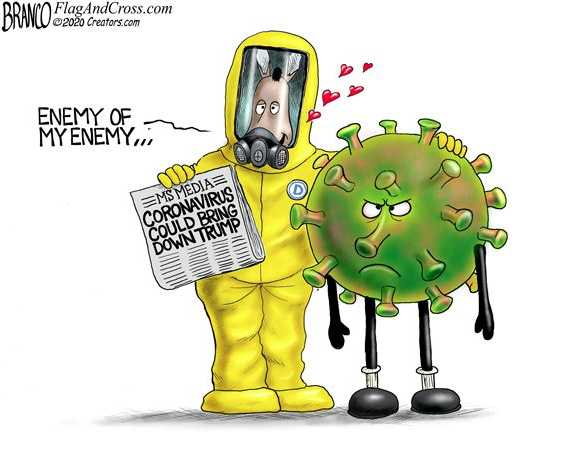 And through it all, President Donald Trump’s economy continued to soar. Unemployment numbers broke records for all minorities to the point that generational Democrats were leaving their party, declaring that they would vote for the president who actually cared about their well-being. And during the 2020 Presidential Primaries, even the most popular Democrat candidates weren’t filling stadiums and creating the frenzy of Trump rallies. In fact, President Trump was breaking voting records in primary elections where people didn’t even need to vote for him!

But every conservative on Planet Earth knew these people weren’t going to stop trying to destroy this man. We all knew something was coming, and we knew it would have to be something big.

Of course we never imagined it would be a ‘Made In China’ virus.

It didn’t matter that President Trump was very quick in stopping all international flights to and from China. He was called a racist for doing so, despite the fact that he may have stopped this thing from being worse than it was from the start.

It didn’t matter that President Trump began doing weekly broadcasts, updating Americans on progress and what is being done to stop the spread of the virus. Instead the global media has chosen not to broadcast his updates at all. But of course they have to do this. If their goal is to incite fear and pandemonium–perhaps even longer than necessary–they can’t allow the President and his advisors to be the calming voice of reason. Why? Because that hasn’t been their narrative the past 4 years. They certainly can’t allow THIS president to be the guy who gets to talk about ‘hope’ or possible cures on the horizon. Sure, all of us conservatives know whatever they tell us is mostly propaganda, misrepresentations, and/or flat-out lies–but unfortunately much of the world believes whatever they say.

It didn’t matter that America immediately created more virus testing than anywhere in the world. We were able to test people all over the U.S. which meant we soon had a better idea of how far the virus had spread. But that, too, caused the global media to attack the President. Because of the size of the U.S. compared to other parts of the world, and because other countries still haven’t tested most of their population, headlines blasted that America was the “most infected country in the world”. And the media thugs followed suit, ridiculing Trump by pushing things like #AmericaIsNumberOne on Twitter…

As for the stimulus package, it doesn’t matter how tirelessly President Trump works to save every small business in America. It won’t matter if he personally puts cash in everyone’s pockets. The media hacks will whine that the stimulus is either not enough money or that it’s far too much. In other words: Trump can’t win.

And last, it won’t even matter if the President and his medical team find a cure for the virus and have the potential to save the entire planet. By Easter. With his weekly broadcasts silenced and the world only hearing their version of the “truth”, people will continue to live in fear. They won’t believe the president when/if he says it’s safe to go back to work.

And that is what the media hounds are hoping for. Because believe me when I say this, and I’m going to say it loud:

UNTIL TRUMP IS OUT OF OFFICE, LEFTISTS, TRUMP-HATERS, AND THE GLOBAL MEDIA DO NOT WANT AMERICANS TO GO BACK TO WORK. THEY WANT AMERICA TO COMPLETELY FAIL.

They don’t care how many jobs are lost and this is my own opinion, but I believe it to be true: many of these creatures (the wealthy globalists, politicians, and celebrities who live in cushy mansions) do not care how many ‘regular’ people have to die. They want every single thing Donald Trump has accomplished, big and small, to crumble under his feet. They are praying to whatever entity they believe in that all of Trump’s private businesses will fail. They hope beyond hope that his family’s businesses to fail. And they especially want everything President Trump has done to Make America Great Again to fail.

The way they plan to do this is by blaming President Trump for the entire coronavirus. So how can they do this?

At first I thought they might wait until America was safe and people were recovering but nope, they’ve already begun their 24/7 attack campaign.

As early as March 17, trending #2 on Twitter was #TrumpLiedPeopleDied.

On March 26, there was this from Joe Biden’s General Council:

If you are not at your job today, it is because Donald Trump did not do his job (to fight #coronavirus) in January and February.https://t.co/ZvOU3bFcL2

Here’s what was in The New York Times today:

“The Road to Coronavirus Hell was Paved by Evangelicals”

Instead of stating the truth—that the road to this pandemic was paved by China, who actually kicked The Times out of their country@nytimes runs this garbage

Even Hillary Clinton has come out from under her rock to begin gleefully tweeting again:

It’s incredible that this has to be said: Letting thousands of people needlessly suffer and die is wrong. It’s also not a recipe for rescuing the economy.

So folks, it’s already here–their biggest, last-ditch global media blitz meant to take down the President. They are probably counting on America going into a recession, or better yet (for them), a depression. And they will be counting on America’s short-term-memory in order to make their goals complete by the November elections.

For example, think about what it might be like in six months if there are people who’ve lost their small businesses and are still unemployed. These folks won’t be thinking about some spring virus that most of the population never contracted. But you’d better believe when they turn on their television or read the newspaper they will see the reason why things are so bad: DONALD TRUMP.

In addition to their ‘Trump Lied People Died’ mantra, I’m putting on my Kreskin hat to predict a few more anti-Trump propaganda headlines you might see:

Trump: The Reason Everyone Lost Their 401Ks!
Trump: The Cause of The Great Depression of 2020!
Trump the Killer of Small Businesses and Restaurants!
Trump Dumps America!

Also be on the lookout for a new hashtag, complete with hats and t-shirts (China is probably making these right now):

In case you need a reminder as to exactly how/when the China virus began, CLICK HERE for a very important timeline from Frank Gaffney’s Center for Security Policy. It shows from start to finish (updated regularly) with Patient Zero in Wuhan, China on November 17, 2019. You’ll also see the ensuing propaganda both China and the media have been using ever since to place blame on America and President Trump.

I pray that all of you have plenty of food and supplies to get through this thing, and please make sure you are protected for whatever comes down our path. I pray for our country, and for President Trump because he is up against some mighty evil forces.

And remember: No matter what they try to do to us, in the end God wins.