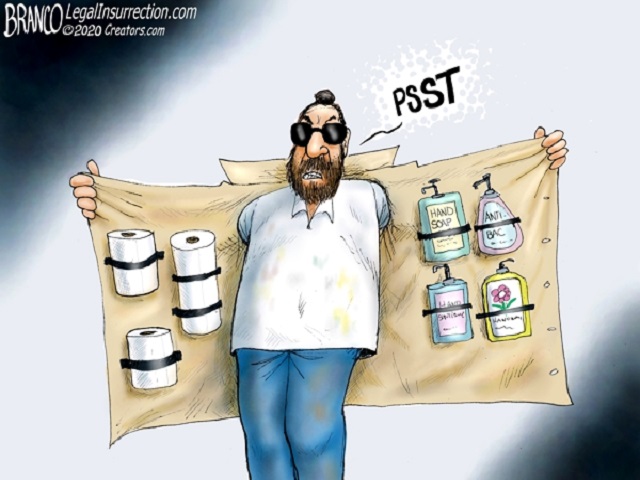 After the Wuhan Flu hit America, the Democrats decided that America should be more like China.

New York’s Governor Andrew Cuomo, who got his job the same way as many totalitarian leaders, by being the son of the guy who used to have the job, led the way to the People’s Republic of America.

Or, the People’s Republic of Sanitizeristan.

“We are introducing New York State Clean hand sanitizer, made conveniently by the state of New York. This is a superior product to products now on the market,” Governor Cuomo declared. “To Purell, and Mr. Amazon and Mr. eBay, if you continue the price gouging, we will introduce our product, which is superior to your product. And you don’t even have the floral bouquet, so stop price gouging.”

The specific part of the state making NYS Clean is the Great Meadow Correctional Facility: a maximum-security prison which Cuomo had visited two years ago to address the constant violence in the prison.

His new message to the convicts is, “Make hand sanitizer, not shanks.”

Corcraft, also known as the Bureau of Corrections, was already making hand sanitizer at $68 bucks for a five-gallon pail. There’s a nice profit margin there considering that prison workers are being paid between 16 cents to $1.30 an hour. If that doesn’t sound so cheap, that’s because Corcraft’s customer was the government and taxpayers were paying the bill. Local governments, by law, already have to buy hand sanitizer and many other industrial supplies from Corcraft whose money goes to the state.

The People’s Republic of Sanitizeristan was an invisible scam that predated the coming of the coronavirus which diverted money from taxpayers and revenues from small businesses and workers.

Hand sanitizer made by prison labor at as little as 16 cents an hour is always going to be cheaper.

But there’s an underlying reason why hand sanitizer is so out of stock and so expensive. Yes, the small third-party sellers who make up much of the sales volume for Amazon and eBay rushed to buy up all the hand sanitizer they could and then began taking advantage of the panic buying. After politicians threatened Amazon and eBay, the dot com giants banned price gouging listings, and the sellers (at least those who weren’t stupid enough to give interviews to the New York Times) vanished into the less regulated black markets of Craigslist and other more obscure and less monitored platforms.

It worked for the Bolsheviks with wheat. It’s bound to work with hand sanitizer in America.

But why wasn’t there enough hand sanitizer on the market to meet the upsurge in Wuhan Flu demand?

As part of President Trump’s moves to cut the red tape, the FDA announced that it won’t be cracking down on pharmacies that make their own hand sanitizer. Or as the official government release states, “Policy for Temporary Compounding of Certain Alcohol-Based Hand Sanitizer Products During the Public Health Emergency.”

Don’t get the idea that the FDA is throwing all caution to the winds by letting people make their own hand sanitizer. Or freely empowering businesses to just go ahead and mix alcohol with aloe.

The FDA’s permissiveness for making hand sanitizer is limited to “State-licensed pharmacies or Federal facilities.” And it’s not providing permission, per se, but announcing that it “does not intend to take action against compounders that prepare alcohol-based hand sanitizers for consumer use for the duration of the public health emergency.” How magnanimous of the bureaucracy.

That’s understandable since the FDA recipe for hand sanitizer does list such exotic and formidable ingredients as “alcohol”, “glycerol”, “hydrogen peroxide”, and “water”.

What else? No that’s it.

It’s mighty generous of the FDA to promise not to take action against pharmacies who venture to assemble this alchemical mixture of secret philosopher’s stone ingredients like alcohol and water.

It also has to warn them not to add aloe or any “other active or inactive ingredients.”

That’s what you have to do if you’re already a pharmacist and can be trusted to handle opiates and experimental drugs just to be able to make and sell a bottle of hand sanitizer.

Unless you’re a bunch of killers and rapists working for Governor Andrew Cuomo at 16 cents an hour.

The FDA didn’t unbend this far merely because of a public health emergency. Perish the thought. A mere crisis would not convince it to allow pharmacists to mix alcohol and water. Better that the entire planet perishes than that the FDA should allow a flouting of paragraph 83, subsection c, comma, regulation.

This is the same government agency that made the coronavirus crisis worse by refusing to allow a Seattle lab to test people who had the flu because the lab hadn’t been certified under Medicare.

What really compelled the FDA to act were the “reports that some consumers are producing hand sanitizers for personal use” while “compounders, relative to untrained consumers, are more familiar with standards and methods for producing drug products” and are easier to control.

Given a choice between allowing pharmacists to mix water and alcohol, or facing an apocalyptic landscape of hand sanitizer moonshiners, the People’s Republic of Sanitizeristan protected its authority.

America isn’t facing a hand sanitizer shortage because of capitalism, but because of socialism.

The speculators buying up hand sanitizer and reselling it on the black market were behaving exactly like their counterparts in socialist countries, stockpiling products due to an artificial shortage, and then pricing the inevitable raids by government agencies against hoarders and speculators into the cost.

The reason we don’t have enough hand sanitizer is because something so simple is so regulated.

The FDA regulates hand sanitizer like a drug. Its ingredients are simple enough that it’s inexpensive most of the time. But the regulations created a barrier to meaningful competition. And when demand spun out of control, there wasn’t enough supply. Prices soared and people who needed it were left without.

Governor Cuomo accused Purell of price gouging. But the company wasn’t gouging consumers. Resellers who understood the limited supply pipeline did that. And government limited the supply.

That’s 25 years from “tentative final monograph” to the final rule for alcohol and water in gel form.

Purell was founded in the forties by Goldie and Jerry Lippman: a nice Jewish couple who were trying to solve a wartime problem. Jerry mixed the first batches in his mother-in-law’s washing machine. The combination of their names, Gojo, is the company that makes Purell. Goldie died in 1972 and Jerry, who had grown up with his father selling vegetables from a horse and wagon, made it to this century.

But Jerry died long before the FDA ever got around to issuing its final hand sanitizer rule.

Generations passed, countless millions were born and died, wars were fought and won, the television, the microchip, and the telecommunications satellite transformed the world. And finally, the FDA finalized its very final rule on using alcohol to sterilize your hands. A practice dating back to Rome.

The final FDA rule isn’t final. It never is.

According to Janet Woodcock, the director of the FDA’s Center for Drug Evaluation and Research, the final rule, “also reaffirmed our need for more data on three other active ingredients, including ethyl alcohol, which is the most commonly used ingredient in hand sanitizers, to help the agency ensure that these products are safe and effective for regular use by consumers.”

After decades of this madness, the FDA would like still more data to determine that alcohol is a safe and effective means of sterilizing human hands.

Perhaps the FDA would like to discuss this with the Roman physician Galen or Paul Walther Fürbringer of the Furbringer Method for disinfecting the hands of surgeons with alcohol in the 19th century?

If Jerry had known this was coming, he would have joined his father’s horse-drawn vegetable business.

And today’s Jerry and Goldie would probably have stuck to something that wouldn’t involve the FDA.

The coronavirus crisis has stirred perfume manufacturers and liquor companies to start making and giving away hand sanitizer. LVMH, which owns Louis Vuitton and Dior, will make and give away hand sanitizer in France. It’s out of reach of the FDA there.

A D.C. distillery is making hand sanitizer and giving it away. But they can’t call it that or sell it.

“I don’t really know what the FDA thinks about things like this,” Pia Carusone, the owner said.

This is what you have to go through to produce an alcoholic hand cleanser. Now imagine what it takes to invent and market a new medication in a timely enough manner to save lives.

Unless Governor Cuomo figures out a way to have convicts make it for the government.

What the Difference Between Biden and Bernie?

The Odd Racist Accusations Regarding a Virus Created in China