Like its namesake, the Biden campaign does odd and inexplicable things. Even as a panicked Democrat establishment united to boost him to a win on Super Tuesday, Biden was in the one major state that he lost badly to Bernie Sanders. And when he decided to give a loudly incoherent victory speech, he did it in Los Angeles, putting him within reach of Bernie Sanders supporters and animal rights activists. 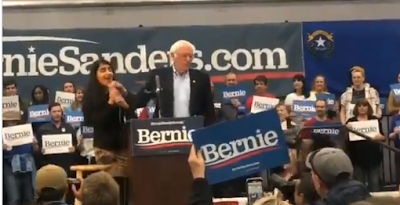 Two of them upstaged him and birthed a thousand memes by leaping on to the stage with anti-dairy signs. One of the women was a veteran animal rights activist and the other, whom Jill Biden was photographed pushing away from her husband, is a passionate Bernie Sanders supporter who can be seen wearing a Sanders campaign t-shirt reading, “I’ve got a Bern-ing passion” on Instagram.

The same group had targeted Elizabeth Warren on Super Tuesday. Three vegan activists, one of them an aspiring actress and other two semi-topless, one of whom had written, “Die” on her stomach, held up, “Let Dairy Die” signs while Warren stared coldly at them from the podium, before California state cops awkwardly removed them from the stage. The media never bothered to report it in a testament to the failing nature of Warren’s campaign which was so non-newsworthy that it couldn’t even be bothered.

The two topless protesters who had disrupted a Bernie Sanders rally earlier had garnered more coverage, but, paradoxically, the radical animal rights group behind it is a big fan of Bernie. Unlike the Biden and Warren protests, the members of Direct Action Everywhere or DxE emphasized that they were supporters of the socialist senator who wanted him to stop supporting Vermont’s top industry.

Additionally, much of the promotion for DxE has come from Glenn Greenwald, a pro-terrorist extremist, and his website, The Intercept. Greenwald, despite his defense of terrorists who kill Jews, is a vegan. But then again, Hitler was a vegetarian. The Intercept, which is funded by a tech billionaire who is the wealthiest man in Hawaii, has dedicated its 2020 campaign coverage to promoting Bernie Sanders and trying to destroy his opponents. Its former senior politics editor works as Bernie’s press secretary.

But the real story behind DxE’s under-dressed protesters disrupting 2020 events is a typical example of the consequences of cultivating radicals and extremists. The Sanders camp has rallied crazies who can’t be controlled. But the crazies are coming from inside the tottering house of the Democrat Party.

DxE was created by Wayne Hsiung, a corporate lawyer, who also helped found the Berkeley Animal Rights Center. DxE operates out of the ARC offices where it trains its activists who engage in direct action. Direct action is a leftist euphemism for disruptive protests and other forms of sabotage.

And the ARC office is located in the Telegraph Channing Mall which is owned by the City of Berkeley.

A few years ago, Berkeley made a sporadic effort to evict ARC, but protests by lefty groups led the Berkeley City Council to protect the radical group’s ability to continue operating on city property.

Democrat campaign rallies are being disrupted by a radical group protected by Berkeley Democrats.

But interrupting campaign rallies is mild compared to the usual stuff that DxE specializes in. And Berkeley Democrats have explicitly endorsed DxE’s illegal behavior, including trespassing and theft.

At the end of last year, the Berkeley City Council passed a resolution in support of DxE activists who had broken into farms and stolen animals. The resolution implied that humans were animals, claimed that “octopuses” were also capable of consciousness, and urged that, “the Mayor and City Council encourage the Sonoma County District Attorney to dismiss such prosecution or exercise leniency.”

The resolution had been put forward by Councilwoman Cheryl Davila, who had become infamous for her anti-Semitism. Davila’s hatred was so extreme that she had demanded that commissioners endorse a boycott of Israel, and forced out a transportation commissioner who had refused to bow to her bigotry.

Davila went on to nominate Hatem Bazian, the godfather of campus anti-Semitism, and the co-founder of the campus hate group, Students for Justice in Palestine, as her standby officer on Berkeley’s Peace and Justice Commission. Bazian continues to sit on the commission despite his long history of bigotry.

The Berkeley City Council position is kill the Jews, but save the cows. Hitler would have approved.

The DxE activists who were being defended by this resolution included Almira Tanner, the lead organizer of DxE, Wayne Hsiung, its founder, and Priya Sawhney, who had led the disruption of the Sanders campaign event. But, before that, Sawhney had allegedly stolen a calf and chickens, the latter from the farm of a Jewish pioneer who had been the first to introduce certified organic poultry, the former from a family farm run by a couple and their son, who had to deal with this threat to their way of life.

The Berkeley City Council was actively endorsing the illegal behavior of the very woman who would then show up to disrupt a Bernie Sanders rally in Nevada. The radical revolution was eating its own radicals.

The Local Butcher Shop’s owner described it as extortion. But it was extortion enabled and protected by a local government controlled by Democrats.

DxE’s leadership is as ambiguous as its finances. Founded by Wayne Hsiung, its president appears to be another member of the Hsiung family, who is a lawyer at the same firm as Wayne.

A former member runs a blog named, “Is DXE a Cult” which complaints about a lack of financial transparency, and at one point compares the leadership to child molesters. Another has accused DxE of being a cult, and describes a “spreadsheet with detailed info about who from DxE you met, what you did, how it went, and with a list of every event you attend”, and condemns a “culture of fear I repeatedly heard that functions to suppress dissent and the dissenters.”

At the Sanders event in Nevada, Priya Sawhney, who claimed that her activism had been inspired by being discriminated against after 9/11, tried to tug away the microphone from Bernie. The elderly socialist angrily pulled it away from the vegan. Then she grabbed one of the mounted mics, Bernie listlessly tried to tug it away from her and then retreated to the side of the stage, while she, claiming to be his “biggest supporter”, denounced dairy farms.

DxE had moved from harassing local farmers and Berkeley businesses, to disrupting the 2020 campaign.

The Democrat Party had opened the floodgates to radicals and extremists, and the churning mass of lunatics has no bottom and no end. No sooner does one lunatic take the stage then more lunatics rush in to demand that he endorse human rights for octopuses, mandatory polygamy, or killing dairy.

The revolution is devouring its own. As long as they don’t spread butter over them beforehand.

Daniel Greenfield: Bernie Sanders is Funded by the Wealthiest Zip Codes in America

American Coronavirus Pandemic By the Numbers