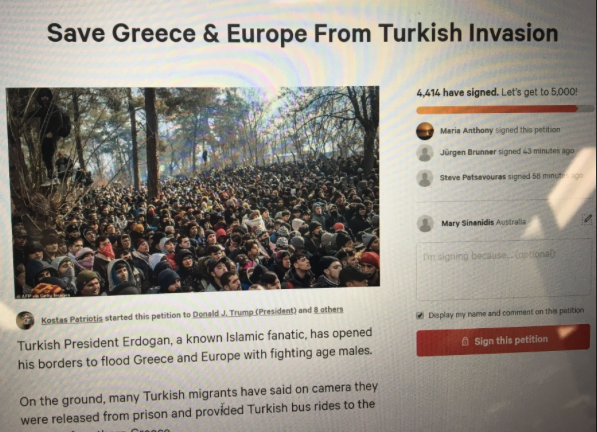 After Turkey’s brutal Islamist regime suffered setbacks in its grandiose scheme to rebuild the Ottoman Empire by invading Syria, it decided to launch an invasion of a much softer target.

Interior Minister Süleyman Soylu has, with sublime chutzpah, kept a running count of the number of Muslim migrants invading Europe through Adrianople (renamed Edirne by its Turkish Islamic occupiers) on his Twitter account. At last count, the number of invaders was 100,577.

Soylu’s tweets are the equivalent of sending ransom notes while holding a gun to the head of the EU.

“Hundreds of thousands have crossed, soon it will reach millions,” Recep Tayyip Erdogan, the brutal Islamist thug fantasizing about becoming the next Caliph by rebuilding the Ottoman Empire, declared.

There’s nothing spontaneous about this invasion of Greece by tens of thousands of migrants where the new ‘Gates of Fire’ are shoddy fences under assault by mobs throwing stones, bars, and firebombs.

And a moral assault by crying women pinching and burning their children to make them weep.

Turkey’s media, firmly under Islamist control after Erdogan’s Reichstag coup in 2016 allowed the greasy butcher to purge the last resistance to his rule, loudly urged announced that the invasion was here.

The European media, just as firmly under party line control, has been feeding a steady stream of staged photos and videos of crying women and children. Crowd photos show masses of young men. The women and children are there purely as human shields and sacrifices. Women in hijabs wail and cry on photogenic rocky shores while media freelancers elbow each to get the best shots. Children are made to cry by burning them and killed outright to guilt the infidels into selling out the future of their children.

There is already a dead migrant child. Who killed it? The migrants overturned the boat to avoid being returned by the Greek coast guard. The child went in the water and despite the best medical efforts in Europe, died. But mere cold facts like these are impossible for the average westerner to comprehend.

What kind of people are capable of drowning their own children for access to Europe’s welfare state?

To quote Colonel Kurtz, “I realized they were stronger than we, because they could stand that these were not monsters, these were men… trained cadres.” Drowning children or strapping bombs to them is a monstrously inconceivable crime to civilized people who no longer really believe in anything anymore.

The Alawites of Syria, their Shiite allies from Lebanon and Iran, will defend their borders. As the Turks discovered the hard way. They will lie, cheat, and steal, and die and kill to protect those borders.

And the Europeans will ask you for your papers. If you refuse, they will eventually let you in anyway.

America lost every war in the last three generations because we were willing to die, but not to kill. The Europeans are neither willing to die nor kill. And so, the continent is being overrun by those who are.

In WW2, Nazi Germany and Imperial Japan, as a last resort, turned to child soldiers as the war was lost. But being forced to face them did not make us question our morality. We understood that the monsters are the ones who dispatch children to fight their wars, not the soldiers who are forced to face them.

Seeing child soldiers made us determined to end the evil horrors of the Nazi eugenic breeding houses and concentration camps, and the Japanese biological experiments, mass rape, and ritual cannibalism.

By the time Vietnam came around, our elites no longer knew what they believed in anymore. When the enemy did horrifying things, it convinced us that we must be the monsters because they very clearly believed in something so compelling that they could do these things. And we didn’t believe in anything.

Erdogan, in his billion-dollar palace surrounded by costumed guards, understands this. So does the migrant hurling a cinderblock at a border guard. Westerners won’t fight for their countries. They will.

When the EU envoys go to negotiate with Erdogan, they will be up against a man who had the last independent military, police, and judicial leaders rounded up, and anally raped by Islamist thugs.

Whom do you want to bet on?

Last time, the Euros gave him nearly $7 billion. This time the price will be a whole lot higher. And no matter how much Danegeld is paid to the Sharia Vikings, the migrant streams will march on.

Erdogan and the Islamists of the world are using refugees as a weapon because they know that Europe has the technology and the infrastructure to resist military forces, but can’t resist mere bodies.

Migrants are a weapon. They’re one of the more potent human missiles in the arsenal of globalism which has shifted the future from the technocratic upstarts of western civilization with their skyscrapers and empty houses of worship, to the old civilizations of Asia which have the relentless will to take them.

The latest invasion of Europe is a blatant move to extract more money for Turkey’s corrupt failing economy whose chief purpose appears to be supplying wealth to the Islamist nomenklatura, and to force countries already staggering under the weight of previous migrant invasions to help Turkey out in the Sunni-Shiite war set off by its invasion of Syria. But these are mere details of the political moment.

Western humanitarian nations want to fight their wars with bombs and tanks, but their ruthless eastern enemies prefer to fight them with humanitarian weapons. Muslim countries dispatch refugees, and when they turn terrorist, pay for their lawyers. The Russians and Qataris hack their way into poorly defended databases and disguise the attacks as leaks from journalists, and human rights activists.

Latin American countries send huge chunks of their populations to come to America and send back checks. Our elites blanch at being accused of locking children in cages. But the migrants, knowing that families will be immediately released, buy or steal children, as their golden tickets to the welfare state. And we are the monsters for wanting to apply DNA tests before releasing them to their captors.

Nobody wants to fight us on our own terms. And why should they? Who’s going to try to punch the giant in his armored chest when he has a glass jaw? Why bother equipping 30,000 men with rifles, when you can just dump them ashore, accompanied by a few women and children, for a successful invasion?

Resisting humanitarian warfare requires drawing firm lines between ‘us’ and ‘them’. That’s the line that globalism erases. And if there’s no line, then their crimes are evidence of the evils of our society.

Wars are won only by those nations, peoples, and people who can draw that line.

If there is no “us”, then what are we fighting for? If there are no nations, why defend their borders? If all beliefs are equal, then great conviction establishes moral superiority over those with lesser conviction. It doesn’t matter if the belief is in the supremacy of Sharia law and the descendants of Mohammed.

The EU established that there are no nations. The Ummah and Caliph Erdogan are taking it at its word.

And the Europeans protest against the mass invasion by tens of thousands of migrants, not because it’s bad for Europe, but because it’s bad for the migrants to have the burden of doing all the invading. They tell Erdogan, who would drown every one of them, that it’s not the best solution to the refugee crisis.

Erdogan sees the millions of migrants as Turkish national assets. Cannon fodder to be used in asserting his Ottoman dreams at the expense of Europe. The Europeans care more about them than he does. That’s what makes them effective weapons. When fighting monsters, humanity becomes a weakness.

American police officers were prevented from fighting crime because of all the people who would be locked up and maybe even shot. And now Baltimore has racked up 50 murders in just two months. Our soldiers were prevented from killing terrorists to save civilian lives, and thousands of our soldiers, and countless civilians died, and entire regions devolved into savage bloodlands of ethnic cleansing.

Europe allowed its cities to be swarmed before and thousands of women were raped, bombs and vehicles were used as weapons in crowded streets, and it still hasn’t learned to say “no” and mean it.

The members of the Ummah at the gates of Greece know what they believe. The thugs throwing stones, and the wailing women burning their children to make them cry, combine a perfect conviction in the providence of Allah, with the selfish collectivism of the family group into which they were born.

The EU believes in the selfish collectivism of its bureaucracy. But free health care, free education, and a short work week isn’t something you fight and die for. Once upon a time, hungry people did. But, as Nietzsche said, “Erst kommt das Fressen, dann kommt die Moral.” The hungry became obese burghers. With their appetites sated, they turned into moralizers filled with platitudes, but no actual beliefs.

They are not about to fight for what they have, because they aren’t hungry yet, and they believe in nothing except the power of socialist goodness that enables them to have their goodies. If they understood how finite those goodies are, they might fight, but then they wouldn’t be socialists.

Refugees are a weapon. But not one that comfortable people in prosperous societies understand. And by the time they come to understand what is happening, it may be because they will be the refugees.

When you believe in nothing, and family is an empty word, then you will only fight for what you have.

World War III was fought and won with humanitarian weapons. That’s why World War IV is already being fought with sticks and stones on the borders of Europe.

The Poison Politics of the Democrat Party

Taking Stock of the Democrat Party