Senator Elizabeth Warren née Herring only lost the Democrat primaries because of sexism.

Hillary Clinton blamed Warren’s setbacks on “unconscious bias” and “gendered language”. If only the media had referred to Warren as “him” or “xer” while being unconscious, it might be the nominee.

“Sexism Sank Elizabeth Warren,” bleats The Nation. “Gender is at the core of this,” Salon insists. 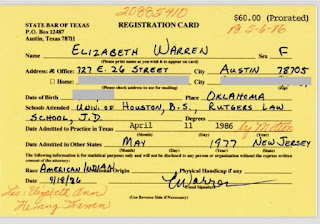 There’s no such thing as gender when it comes to castrating 7-year-old boys, or in weightlifting
competitions, but is a serious problem for the political ambitions of millionaire 70-year-old professors.

Vox even falsely claims that “women are feeling so defeated after Elizabeth Warren’s loss”.

If women are feeling so defeated by Warren’s primary faceplant, why didn’t they vote for her?

In her home state of Massachusetts, 34% of women voted for Joe Biden, 36% for Bernie Sanders, and only 24% for her.

The sexism problem was much worse among South Carolina women only 8% of whom picked Warren.

Half of Democrats who identify as women, as opposed to ducks, maple trees or windshield wipers, voted for Joe Biden, 17% for Sanders, 12% for Tom Steyer, and Warren tied with Buttigieg for 8%.

Not even 1 in 10 Democrat women in South Carolina were willing to support Senator Herring.

And, in South Carolina, quite a few of them would have been black women. Black voters make up 55% of the Dems in that state. The vast majority of black women didn’t pick Liz Warren. Something must be off.

But that’s South Carolina. They probably don’t even have consciousness raising circles and copies of But She Persisted, Even After They Asked Her to Stop, and Told Her This Was Dunkin Donuts. What about the enlightened state of California where you’re forced to pass a test on unconscious bias to be allowed to disembark at LAX before contracting the coronavirus and six different types of hepatis in baggage claim?

32% of Democrat women in California picked Bernie “A woman… fantasizes being raped by 3 men simultaneously” Sanders. Another 28% chose Joe “Your hair smells like chamomile and Ukrainian rubles”*. Only 14% chose Warren. Why are 86% of California Democrat women such sexist pigs?

In Alabama, only 6% of women picked Warren. The other 94% of women are sexists.

Even from the start, Warren did badly with women. She only won 10% of the female vote in New Hampshire and 18% in Iowa.

While Warren usually did a few percentage points better with women than with men, the gender gap rarely went any wider than that. If Warren lost because of sexism, it was a genderless sexism.

The vast majority of women did not vote for Senator Elizabeth Warren. They didn’t vote for her in the earliest primaries or on Super Tuesday. She did not manage to do any better than secure the votes of 1 in 5 women outside her own state. Either 80% of women are sexists or Warren was a terrible candidate.

Given a choice between condemning 80% of their own party’s women as sexists or admitting that Warren was an unpleasant and unlikable politician, the media chose Warren over women.

Who are the real sexists here?

How is it that the same women (and men) who voted for Hillary in 2016 have suddenly turned sexist?

And Buttigieg? That one’s obviously homophobia.

If you believe the media, the Democrats are a diverse party of racist, sexist homophobes.

And the media has made all of these arguments. Booker, Harris, and Castro all piteously beat the racism drum before going on their good riddance tour. When Buttigieg dropped out, it was homophobia’s turn.

“Pete Buttigieg dropped out of the presidential race, and homophobia helps explain why,” an NBC News column claims.

But if the Democrats are really so racist, maybe it’s time to call it a day and break up this bigoted organization. The media has made a convincing case that black Democrats hate black people (Kamala Harris and Cory Booker had even less black support than Warren had female support), female Democrats hate women, and gay Democrats must be homophobes. The New Hampshire exit polls asked voters if they were gay, lesbian, or transgender. There weren’t enough responses to support anyone.

Since that would be a heretical hate crime, we have to conclude that the Democrats are a hate group. Their victims are the assorted annoying millionaire candidates who never managed to take off. And they would have, if it weren’t for the incredible hatred lurking in the hearts of the nation’s Democrats.

According to The Atlantic, “America punished Elizabeth Warren for her competence”.

How competent was Elizabeth Warren? So competent that she had a plan for everything except losing every primary, including both her home states. Sadly, she even lost Cherokee County. Her enormous competence led her to lie about being an American Indian to advance her academic career and then to try and lie about it again with a DNA test that proves she’s 1/1024th honest. The climax of her competence led her to embrace Bernie’s socialist plan to destroy Medicare while claiming to be a capitalist. Warren was all things to all people and, paradoxically, nothing to anyone. Including women.

Who decided that Warren was competent? The media did.

If Warren is a flake, then so is the media. And the media would rather accuse millions of Democrats of being sexist, racist, homophobes than admit it was wrong. Just imagine what it’ll accuse Americans of.

The last time the media was wrong about an election, it blamed a vast Russian conspiracy, and spent the next few years demanding that Facebook censor every conservative outlet that called it correctly. Just imagine the complete meltdown that will come upon us in 2020 when it’s proven wrong all over again.

When Biden loses, the media will be forced to accuse the entire nation of ageism and hating the Irish.

*That’s not the correct name of the currency. It’s a joke.

How Trump and Gen Z Can Solve a Lack of Ventilators