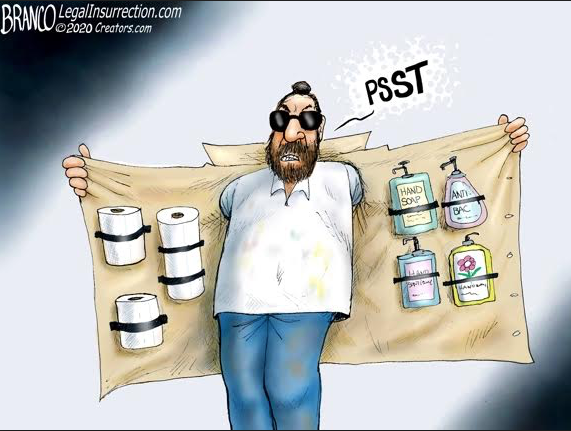 A few weeks after Californians cast their votes for Bernie Sanders, there are huge lines to buy toilet paper. Toilet paper, like dairy products and cleaning supplies, are limited to two per household.

Savvy shoppers have learned, like their counterparts in the old Soviet Union, to get what they need by bartering what they can buy. Toilet paper for antibacterial soap. Milk for wipes.

Yakov Smirnoff had spent his career joking about standing on line to buy toilet paper and discovering that the government store wasn’t even selling toilet paper, but something to be bartered for it.

“If I start making jokes about a shortage of toilet paper in America, it won`t make any sense because you walk into a store and see 15 brand names of toilet paper,” he had once told a newspaper.

“Yesterday I stood in line for two hours waiting for CVS truck to unload. Everyone was waiting for alcohol and toilet paper. I felt like I was back in Soviet Russia,” Smirnoff, who now lives in California, tweeted.

The old Soviet anecdotes finally make sense to Americans. All it took was a little taste of the real deal.

“You don’t necessarily need a choice of 23 underarm spray deodorants when children are hungry in this country,” Senator Bernie Sanders had once snapped.

And now there are no choices of deodorant. You take what’s on the shelf and learn to like it.

Sanders voters had wanted to live under socialism. And now they have the opportunity to learn what it’s really like. Between the curfews, the shortages, and the absolute government authority, they’re living in the type of system that Sanders and his base have admired when it was far away and safely overseas.

In 2003, Sanders, along with Rep. Conyers, Rep. Jesse Jackson Jr, and Rep. Sheila Jackson Lee, had signed a letter of support for Hugo Chavez: the brutal Venezuelan strongman. “If Abraham Lincoln or George Washington were alive and here today, they would be on our side,” they told him.

“These days, the American dream,” Sanders once wrote, “is more apt to be realized in South America, in places such as Ecuador, Venezuela.”

The socialist dream in Venezuela began with toilet paper shortages, then dairy shortages, and eventually no food, medicine, or drinking water, while the Marxist regime paid its military thugs in food supplies.

A few supermarket lines are only a small taste of “democratic socialism” in action.

The coronavirus isn’t Communism, but it has created social, political, and economic conditions similar to that of Communism, with an authoritarian state, a frightened populace, and resource shortages.

There’s no better laboratory for seeing how the real thing would play out in California.

California’s Sandernistas are invariably on the wealthy and comfortable side. Bernie bumper stickers rarely show up on beat-up Chevys, but on a Tesla, on a Mercedes, or on a Beemer. You can spot Bernie lawn signs outside lavish mansions whose owners imagine that socialism is for someone else.

Someone else’s cars and mansions will be confiscated. Not theirs. Someone else won’t be able to buy basic staples. Not the Silicon Valley tech bros pouring a fortune into the Sanders campaign and its PACs.

Bernie’s wealthy donors in the Inner Mission and Haight-Ashbury in San Francisco, and Echo Park in Los Angeles, are now discovering the lifestyle that they’ve only romanticized from a distance before as they wait on line in empty supermarkets and stare baffled at ‘Out of Stock’ messages on Amazon listings.

To paraphrase Sinclair Lewis, the poet laureate of California socialists, “When Communism comes to California, it will be wrapped in a repurposed paint fume respirator mask, wearing medical gloves, and driving a BMW with a Bernie 2020 bumper sticker while frantically grabbing rolls of toilet paper.”

There are two kinds of socialism: the ideal and the real.

Ideal socialism is an entertaining set of intellectual games, castles in the sand, ivory towers in the air, where the right words and attitudes can enable the enlightened to implement heaven on earth.

Real socialism is standing on line for toilet paper.

Capitalism is the best argument for socialism. When the supermarkets are full and there are lots of good jobs, then it’s easy to imagine that the system can be improved with a lot of authoritarian planning. Why not take all those goodies and distribute them more efficiently? There’s so much of the stuff that it seems easy to redistribute it, to add a few zeroes to budgets already filled with imaginary numbers.

And socialism is the best argument against itself.

Bernie’s vague rambling plans to nationalize everything from electricity to the internet, to bring into being a nation where the government decides how much deodorant and shoes you get to have, sound great until it stops being a hip ideal and becomes the tawdry reality of waiting on line for toilet paper.

You don’t need a literacy program to realize socialism is a bad idea when you’re living through it.

California politicians have taken a break from a torrent of insane bills that proposed to ban receipts (they’re bad for the environment), ban fur, legalize eating roadkill, (if you run over a rabbit, you can eat it, but don’t you dare wear its fur), and banning separate clothes sections for little girls and boys, to ineptly tumble the state and its major cities headlong into a mismanaged response to the coronavirus.

The incompetence of California Democrats was all fun and games when it led to blowing up the homeless population while wasting billions of dollars, banning police from turning over illegal alien pedophiles to ICE, or accidentally outlawing freelance work across the entire state for the unions.

But now there are real consequences. It’s not just another bunch of zeroes or a handful of victims whose stories will never appear on any cable network except the one no respectable socialist would watch.

Millions of lives have been disrupted. And countless lives are potentially on the line.

Socialism sounds like a great idea if you imagine that the people running things are smart, moral, and competent, as socialists imagine that they are. It falls apart in the real world where people aren’t.

After voting for Bernie Sanders, Californians are discovering what it’s actually like to live in Venezuela, Cuba, or the Soviet Union, where they have no rights, there’s nothing in the stores, and nothing works.

The Palestinian Situation. Who's to Blame?