In Los Angeles, it’s not unusual to see a Beemer streak by with a Bernie 2020 sticker on the back bumper. There’s no such thing as a poor socialist and Bernie’s backers tend to have lots of cash. 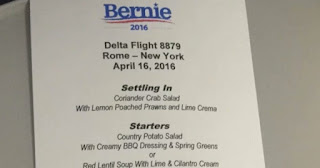 While Bernie Sanders accused Bloomberg of trying to buy his way to the nomination, the socialist bought his surge with $50 million in spending. He raised $25 million just in January. There’s more buying to do.

And while he boasts of backing from small donors, the wealth of his donors is anything but small.

Google, Amazon, and Microsoft. Their employees are three of the top 4 Bernie donors. Apple is in fifth place. These dot coms are not exactly organizations known to employ members of the proletariat. Google software engineers have sent thousands of dollars, individually, to Bernie.

Google’s senior engineers, like the ones who have backed Bernie, make $250,000 a year.

Geographically, Bernie’s top dollar zip code is 94110 in San Francisco. The average household income in this part of the Mission District, specifically the Inner Mission, the Bernal Heights area, is $166,302. The median home value is around $1.5 million and the median rent is almost $5,000 a month.

There are no poor socialists in what was dubbed as “the hottest neighborhood in San Francisco.”

This was the area that Salon founder David Talbot blasted as the “hottest zip code in the country” overrun by “Silicon Valley movers and shakers” in “new-model Teslas, BMWs and Uber limousines”. It’s only fitting that it should also be the spigot through which so much of Bernie’s tech bros dollars flow.

The second top dollar Bernie zip code in San Francisco, 94117 or Haight-Ashbury, seems like a better fit for Bernie. But the Summer of Love has long since given way to the Winter of Trust Fund Hipsters in the Haight where the average income is $201,503 and average home values top $1.6 million.

The media has made much of Bernie’s flow of donations from Brooklyn. But the money isn’t coming from the working-class Brooklynites of Bernie’s old neighborhood, but the gentrifying areas of the borough. 11215 or Park Slope is the second biggest top dollar zip code of Bernie donors.

The neighborhood, formerly urban, known as the home of Mayor Bill de Blasio, and the Park Slope Food Co-Op and its anti-Semitic push to boycott Israel, is filled with renovated brownstones filled with wealthy hipsters. It’s a place where a three-bedroom apartment can go for $2.9 million.

To New Yorkers, Park Slope has become a curse word embodying everything wrong with the new elite.

In third place on Bernie’s donor list is 10025 or the Upper West Side of Manhattan. With an average rental price of $4,695, it’s not exactly an inexpensive place to live. The UWS is the 8th richest neighborhood with a $190,281 mean household income. And this is where Bernie’s cash comes from.

11238 or Prospect Heights, in fourth place, is a newly gentrified neighborhood in Brooklyn where the median sales price passed $1 million, and you can expect to spend $800,000 for a one-bedroom co-op. The formerly urban neighborhood has been colonized by wealthy hipsters from Park Slope, and much of what goes for Park Slope also goes for Prospect Heights. They’re the gentrifiers funding Bernie Sanders.

In fifth place is 98103, the Seattle neighborhood of Wallingford. With an average household income of $124,504, the University of Washington neighborhood with its $800,000 homes isn’t working class. Among the cheapest housing options is a $400,000 one-bedroom condo that’s a mere 757 square feet. The area is so expensive because it’s home to tech employees, including Microsoft engineers.

And in seventh place is 90026. The Echo Park neighborhood in Los Angeles is a hipster haven which boasts the most expensive pizza in the city where the median price for housing is $813,000, and rents can hit $6,700 a month. Like Park Slope and Haight-Ashbury, Echo Park is full of wealthy hipsters.

In eight place is the Logan Square neighborhood of Chicago at zip code 60647. Logan Square is among the most expensive neighborhoods in the Windy City. A condo will set you back over half a million dollars. The rush got so bad that a garage transformed into a home was going for $2.85 million. With its hipster bars and a farmers market, it’s the perfect area for Bernie’s upscale and trendy base.

Ninth and tenth on the list of Bernie’s money neighborhoods are two expensive Manhattan areas.

10003, Union Square and Greenwich Village in downtown Manhattan, is home to NYU, once a hive of angry radicals, now stuffed full of luxury co-ops with wealthy radicals, where condos cost millions of dollars. Greenwich Village has been listed as the ninth most expensive neighborhood in New York City. So, it’s only fitting that it’s the ninth on the list of areas funding the Sanders 2020 presidential campaign.

What do Bernie’s top donor zip codes have in common? Beyond wealth, Bernie’s cash flow is coming from a handful of very blue cities, almost all of them in California and New York City. Only two of the top ten zip codes are located outside San Francisco, Los Angeles, and New York City. That alone conveys the insular and unrepresentative nature of Bernie’s funding base compared to the rest of the country.

Bernie’s campaign is powered by the very concentrations of power and wealth that he condemns.

The unrepresentative nature of Bernie’s backers isn’t just a matter of geography, but of culture. Some of Bernie’s top dollar zip codes overlap with the tech industry. His candidacy represents another example of how the tech industry has not only distorted our economy, but also warped our politics.

Much of Bernie’s money comes from hipster hubs where wealthy young white people in major urban areas have made old neighborhoods, including Bernie’s Brooklyn, unaffordable to the working class and middle-class people who once used to live there. Bernie’s donors, especially in places like Prospect Heights and Echo Park have also played a significant role in displacing minorities and the poor.

Follow Bernie’s money and it’s easy to see his campaign for the hypocritical farce that it is.

Tech industry bros and trust fund hipsters are buying the nomination for Bernie, while displacing minority candidates, the way they bought up brownstones in Brooklyn and displaced black people.

He’s the candidate of class warfare, not on behalf of the poor, but of young wealthy people seeking more power and influence at the expense of the more established wealth of an older generation. It’s tech industry bros warring for influence with fossil fuel titans, not for the poor, but for themselves.

Bernie’s base is much less than 1%. Call it the 0.001%. A wealthy and influential young lefty elite with disproportionate influence over the internet is setting the nation’s agenda using digital media, tech dominance, and the Weekend at Bernie’s campaign of a senile socialist who barely knows where he is and won’t release his medical records after a heart attack because they will show he’s barely there.

That’s Bernie’s slogan. It’s true, just not how people are meant to perceive it. Bernie is little more than a puppet of the campaign pros who made him a household name in 2016 and are trying to make him more than that now. The “Us” are not Americans or even Democrats. It’s the elites of these zip codes.

0.001% of the country is using a confused elderly socialist as a proxy for imposing their will on America.

The 2020 election will be a test of wills between Americans and the 0.001% living in Park Slope, Echo Park, the Mission District, and Haight-Ashbury. After eight years of hipster rule under Obama, is the country ready to bow it heads and let a handful of wealthy young radicals run their lives again?