Early Saturday morning, a bearded perpetrator in a hooded jacket, wearing gloves, smashed the glass door and windows of the Humboldt Republican headquarters with rocks. He poured an unknown liquid into the storefront office before escaping on a bike into the streets of Eureka in the pre-dawn hours.

There was one obvious clue. The bike had a giant BERNIE sticker on it. 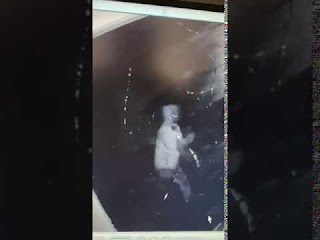 When police caught up to the alleged perpetrator, Michael Valls attempted to escape on his bike, then he tried throwing the bike at the cops, and, when he was finally taken into custody, gave authorities a false name. But police caught him with the Trump flag that he had stolen from the vandalized office.

The Bernie Sanders supporter was charged with burglary, felony vandalism, attempted arson, resisting arrest, and providing a false name. The chemical liquid he had poured inside the office turned out to be flammable. Bail was set at only $25,000, and Valls was out of prison by Sunday. It is California after all.

And in an atmosphere of rising radical violence, maybe this story wouldn’t be so extraordinary.

But this wasn’t the first time that this happened to the Humboldt GOP HQ. It was the sixth time.

Not in a decade, but in only two years.

The 300 block of 5th Street with a Starbucks and Wells Fargo, adjacent to two motels and an AV shop, seems like an unlikely place for a pitched battle between radical leftism and the national norms. But that’s exactly what the extended campaign against the modest storefront with its “Republicans Register Here” notice and Trump signage on a street in this small 27,000 population city represents.

The small office with its American flag fan banners, a few tables and a bookcase is on the front line of a new war between radical leftist extremists and remaining conservatives in a formerly conservative area.

The windows of the office had been previously smashed in April of last year, before the release of the Mueller report. Like this latest attack, that assault had happened late at night over the weekend. After smashing through the windows with rocks, the “Make America Great Again” sticker was replaced with a “Keep America Green” sticker from the Sierra Club. Nothing says environmentalism like vandalism.

Eureka lefties justified the attack because the office has large cardboard cutouts of Reagan and Trump.

In March 2019, a window had been smashed. In August of 2018, the office was vandalized again, leaving behind signs reading, “Fake President Impeach + Indite”, “45 = Lies House of Lies”, and “Guantanamo and Torture x 20 Years 45 and all supporters.” A “Make America Great Again” sign had been crossed out and the elephant on the “Republican Headquarters” sign had been defaced.

A month earlier, President Trump had nominated Kavanaugh to the Supreme Court.

The windows of the Humboldt Republican Headquarters have been broken three times in two years. They’ve been covered with plywood so often that it’s become a familiar sight. And while this latest incident was the most severe, previous episodes of vandalism had marred the windows, defaced signs, and tried to cause as much damage as possible with whatever the leftist vandals had at hand.

This latest attack is expected to cost thousands of dollars in repairs. Previous acts of leftist vandalism had cost in the $700 range.

And despite the leftist signs, the Eureka Police Department dismissed it as “random vandalism”.

There’s nothing random about 6 attacks on a Republican office either carried out by identifiable lefties, leaving behind leftist signage, or specifically defacing Republican signage. That’s as deliberate as it gets.

But Humboldt County, once a Republican area, had swung leftward. And the HQ has become a symbol of everything that the new radical population hates. During the Kavanaugh debate, lefty protesters had gathered outside the small office with signs like, “Party of the Predators” and “Stop Rapeublicans”.

The lefty protesters targeted the office even though it had nothing to do with Kavanaugh and had already been vandalized two months earlier.

When local lefties can’t get to D.C. marches, they target the Humboldt County HQ. That’s where opponents of the Bill of Rights appear toting signs like “Massacre Mitch” and “Republicans: Shame on you!”

Reagan was the last Republican to win Humboldt County which has passed its own sanctuary measure. And Eureka, with its large homeless population and regular anti-Trump protests, leans lefty.

The Humboldt County Republican headquarters has faced a uniquely sustained assault on its existence. It is not the only Republican office to be targeted for vandalism and harassment, but the persistence of the attacks and the general disregard of the authorities, is unique and revelatory. This is the first time an arrest has been made despite the presence of surveillance equipment and attackers who leave handwriting samples. And the one man arrested for this latest incident is already back on the street.

“This is about your friends and neighbors and coworkers and people you live with here. It’s just sad that we can’t exercise our First Amendment rights in peace,” Schutt noted back in 2018. “There is not one member of my party here that would go down and do this down the street at the Democrat office.”

The Humboldt County Democrats enjoy an all-glass office on 4th Street. If there were a random violence problem, somebody would have taken a rock to it by now. That’s because there’s nothing random here.

The sustained assault on the Humboldt County Republican headquarters is not the work of one man, but of a culture of intolerance and hatred. It can be summed up by the Bernie sticker on the bike that the vandal threw at law enforcement as he was trying to make his getaway from the scene of the crime.

In 2017, James Hodgkinson, another Bernie Sanders supporter, came to a Republican charity baseball game with a list of the names of Freedom Caucus members and opened fire. The FBI coverup of that attack, which falsely claimed that it was a spontaneous act with no motive, has yet to be investigated.

Like the “random vandalism” in Eureka, the assassination of Republicans was also treated as random.

Civil wars begin in small ways. They’re born out of intolerance. A refusal to coexist. A failure to enforce the law. To punish violence against people different than the ones who hold political power.

In recent weeks, Project Veritas Action has released videos of Sanders staffers threatening violence before and after a possible victory. The media has maintained a tight ban on covering these videos.

In Jacksonville, Florida, earlier this month, Gregory Timm drove a truck into a Republican voter registration tent to take a stand against President Trump. It is no coincidence that the attacks on the Humboldt County Republican headquarters are linked to Trump’s victory. Or that they’ve been excused by some local lefties because the GOP HQ dared to have Trump material on the premises.

There is nothing random or isolated about the reality that the Democrats have become radicalized.

There is no meaningful separation between extreme policies and extreme tactics. Anyone willing to take away your rights is also willing to put a rock through your window. That’s what we’re seeing in Eureka.

Barry Shaw: Philip Haney Did Not Commit Suicide. He Was Murdered.