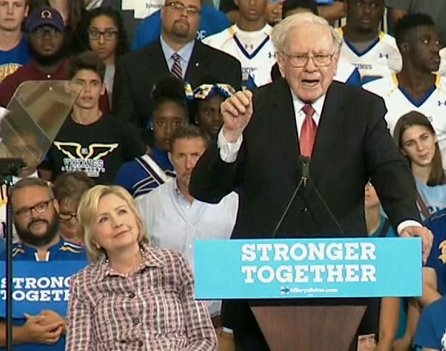 In March, as the Wuhan Flu was taking off in America, the Oracle of Omaha began buying airline stocks. Specifically, one of the wealthiest men in the country increased his stake in Delta Airlines to 11%.

Warren Buffett wasn’t oblivious to the coronavirus. The University of Nebraska Medical Center, not far from the black gated mansion of the billionaire, was on the front lines of fighting the outbreak. Passengers from the Diamond Princess cruise ship were being treated 5 minutes from his house.

What was Warren Buffett thinking when he shoved $45 million more in good money after bad?

Berkshire Hathaway now owns 11% of Delta Airlines, and between 8% and 10% of United Airlines, Southwest Airlines, and American Airlines. When you’re squeezed into a 17-inch airline seat, it’s because a major funder of Democrat political causes is extracting maximum value from his investment.

And now Airlines for America, whose major members include American, Delta, United, and Southwest, along with lesser airlines, want a $50 billion bailout. That includes $25 billion in grants and $25 billion in loans and tax relief. While the airlines warn about an economic catastrophe, Buffett isn’t worried.

The airlines made up 4% of Berkshire Hathaway’s portfolio and amounted to $3.7 billion in losses.

Warren Buffett is no stranger to bailouts. In 2010, he penned a fake folksy New York Times op-ed thanking “Uncle Sam” from his nephew “Warren”. Later that year, he became a key propaganda figure in Obama’s push to raise taxes. By the winter of the year, Obama had placed the Presidential Medal of Freedom around the neck of the man who had fundraised for him and acted as his financial adviser.

As Peter Schweitzer noted, “It was only on September 23 that he became a highly visible player in the drama, investing $5 billion in Goldman Sachs, which was overleveraged and short on cash… Berkshire Hathaway received preferred stock with a 10 percent dividend yield and an attractive option to buy another $5 billion in stock at $115 a share… As he admitted on CNBC at the time, ‘If I didn’t think the government was going to act, I wouldn’t be doing anything this week.’”

Buffett seems to think that the government will act and bail out the airlines. Again. And this time for a lot more than the $15 billion price tag of the airline bailout that passed after September 11.

By 2009, Berkshire Hathaway had invested $26 billion in eight financial companies, including Goldman Sachs, Wells Fargo, and Bank of America, which benefited from around $100 billion in TARP money.

There’s no question that the Democrat billionaire is a very sharp investor. But there’s no reason for taxpayers to keep subsidizing his investments. As small businesses are forced to shut down and millions of people are put out of work, should they really be helping Warren Buffett get even richer?

Just as during the bailout, Buffett is betting that the government is going to back his investment.

If the major airlines were really about to go down, Buffett would be trying to get everything out, instead of getting in deeper. The billionaire is betting that Berkshire Hathaway will emerge in a stronger position after the bailouts and the surge of optimism that will follow the lifting of the coronavirus curfews.

But if he wants to profit from the turnaround and the potential takeover of an airline, he should do the heavy lifting on his own. Berkshire Hathaway is sitting on $125 billion in cash. But why cash out his treasury bills when the D.C. swamp will be happy enough to do most of the heavy lifting for him.

Where will those taxpayer-funded profits go?

In 2014, the Oracle of Omaha predicted that Hillary Clinton will win. “I will bet money on it, and I don’t do that easily,” he boasted.

And maxed out his contribution to the Ready for Hillary PAC. He also shoveled money into the DNC.

In this election cycle, he poured $245,000 into the Democratic Congressional Campaign Committee.

Republicans lobbying for an airline bailout are literally fighting to secure taxpayer money that will then be used to fund their political opponents. It’s an insane act of fiscal political suicide.

Beyond political donations, Buffett has spent millions covertly funding abortion activism. Due to his obsessive secrecy, the full scope of his abortion funding is unknown, but the Buffett Foundation donated almost $4 billion to abortion causes, including $674.5 million to Planned Parenthood.

Arguably, the Oracle of Omaha has done the most to promote abortion of anyone in America.

It’s a revelation that clashes with his folksy image and invocation of small-town values. But behind the Garrison Keillor routine, Buffett is just another version of George Soros with an American accent.

At the heart of Soros’ power over American politics is the Democracy Alliance, a club of powerful organizations funneling money into transforming this country. The Democracy Alliance’s core partners include the NoVo Foundation, run by Buffett’s son and daughter-in-law, and funded by $150 million from the Oracle of Omaha.

NoVo funds hate groups like Van Jones’ Color of Change, which plotted to defund the David Horowitz Freedom Center, along with the Rockefeller Family Fund, the Tides Foundation, and the National People’s Action.

That last donation is especially interesting considering NPA’s role in creating the Community Reinvestment Act which forced banks to dispense mortgages to insolvent borrowers. This, as the Freedom Center’s Discover the Networks notes, “ranks high among the primary causes of the 2008 financial crisis.” That’s both fascinating and disturbing considering Buffett’s links to that crisis.

Buffett avoided the subprime crisis while profiting massively from the resulting disaster.

Putting money in Buffett’s pocket will mean more cash for Biden, it will mean more Democrats in the House and the Senate, more abortions, and more power for George Soros’ Democracy Alliance.

So why are Republicans ready to make concessions to Democrats in exchange for the privilege of electing more Democrats with a Buffett bailout? Even if one were to argue that a bailout of the airline industry may be necessary, why would Republicans lobby to cut their own throats?

When the wall isn’t funded, how can the GOP justify a second billion-dollar bailout of an industry that will then just turn around and cut another 2 inches from the cramped seats of the taxpayers who bailed them out?

The Odd Racist Accusations Regarding a Virus Created in China