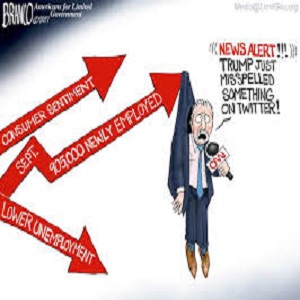 No one is going to say that America is not going through a serious time right now. Many people who have spent years in the medical field will tell you that, in all of their years, they have never witnessed anything like this. For all intense purposes, America has been put on hold. While the Trump administration gives several daily updates from all aspects of how the Corona virus is effecting our daily lives, from medical issues, virus statistics, financial issues, and everything in between, they are also trying to paint a realistic picture of how, going forth, this pandemic will continue to effect American life.

The media however, has a different agenda. Former Obama Chief of Staff, and Chicago Mayor Rahm Emmanuel once said, “never let a crisis go to waste”. The media is taking this philosophy and running hard and fast with it.

Believe it or not, there are other things going on out in the rest of the germ-infested world. Many of those things the media would rather you not know. But being the “go rogue” kind of people we as Conservatives are, and just because it is fun to ruffle Liberal feathers, what are some of the other things going on in the news? Let’s talk about them.

As Corona virus fears were ramping up, Hillary Clinton was heeding those words from Rahm Emmanuel. On Friday March 13, the Washington Examiner reported that Clinton had appealed a Judge’s order that she appear in a sworn deposition about her private email server in regards to the 2012 Benghazi terror attacks on the U.S. Consulate. In an 83-page petition filed by Clinton’s legal team, the ruling was called “outrageous”, and asked the appeals court to order the lower court to change the ruling. The information in the case stemmed from findings by Judicial Watch, a Conservative watchdog group. Judicial Watch President Tom Fitton summed up the appeal as, “just another attempt by the Clinton machine to delay truth, accountability, and the peoples’ right to know”.

It has been eight years, and the American people still do not know exactly what let up to this attack and who in the American government dropped the ball on security, and allowed four Americans to be killed including Ambassador Christopher Stevens. We still do not know why Hillary Clinton deleted 33,000 emails despite a congressional order of preservation. Nor do we know about why former National Security Advisor Susan Rice was sent on five different Sunday morning shows the Sunday following the attacks rambling on about a video that allegedly was the catalyst for the attacks. Corona virus has certainly allowed Hillary Clinton, or her legal eagles to show up in a court room on her behalf, and try to wiggle out of a deposition. You will have to look long and hard for a follow up to this story.

In the midst of drive-thru testing, some Americans were actually voting in state Democrat primaries. Several states have postponed their primaries until the outbreak has passed, but several others went on as planned. Joe Biden had a good week, and is making it harder and harder for Bernie Sanders to see a clear path to the nomination. Poor Bernie and his “Bernie Bros”. There really isn’t a nice way to put it, Bernie seems to be getting the screws from the DNC once again, and they didn’t even take him out to dinner and a movie, once again. But what we are not hearing about from the media is the Republican primaries.

Yes, there is actually someone challenging Donald Trump for the Republican nomination. Former Massachusetts Governor Bill Weld is also running for the GOP nomination for President. But it is not much of a run, because what the media does not want you to know, is that President Trump is smashing records for incumbent presidents who face primary challengers. Republicans are showing up in amazing numbers to show support for this president.

Some examples from around the nation include: In Alabama, when Barack Obama had a primary challenge, he got 241,467 votes. Trump: 708,883. In Iowa, Obama-25,000, Trump-31, 464. And in the all-important state of Texas, Obama-518,138, Trump-1,907,342. Needless to say, the president more than surpassed the number of delegates needed this week to secure his re-nomination. But don’t look for Anderson Cooper, or Joe and Mika to be touting these numbers. They are a nightmare for folks like them.

A good rule of thumb when dealing with crisis, and the media deciding what we need to know and when we need to know it is, when they tell you to look at all the bright shiny objects over here, we had better take a look over there.