Cutting through all the partisan noise in Washington is often the highest hurdle that must be conquered before reaching the point where any serious discussion can be had regarding something as basic as discretionary spending within the federal budget.

For FY2020, President Trump has requested $1.3 Trillion in just that segment of the federal budget.  This is, of course, a small part of the big picture when you add in the things that everyone in Washington always say are “mandatory” and therefore “Untouchable.” These include Social Security, Medicare, Medicaid, Interest on the National Debt.

But lets just bite off the “discretionary” part of the budget for now. 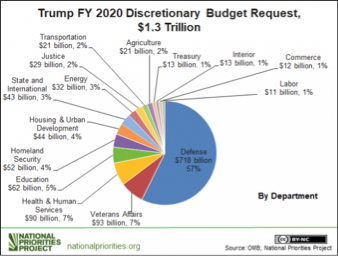 It breaks down approximately as shown in this pie chart. As you can see, there are a lot of pieces to the puzzle, but if you take a close look at Article 1, Section 8 of the U.S. Constitution you would immediately detect a disconnect between this chart and the limits placed on the federal government by the states when they drew up our founding document. Of the total of $1.3 Trillion, the only items that fall within the limits of the constitution are:

But these six parts of the pie only add up to $948 Billion and Defense is 57% of the total budget. So what we are doing every year, for many years, is sending our representatives to Washington to burn through billions of tax dollars doing nine things that the constitution does not allow the federal government to do. The remaining nine departments or spending classifications are supposed to be left to the state to deal with. There is little doubt that some states would be better than others in how they do so, but that was the genius in the constitution’s design.

Here are the offending departments (in billions):

Let me digress for a moment and elaborate on that last statement. The genius of the constitution was that the founders saw the states as independent entities that would take care of its citizens in ways that the federal government was ill-equipped to do while the federal government was tasked with those things that were not practical for the individual states to tackle on their own. The latter being the things that are common to all states but cross state lines, and the things that are external to the United States itself – foreign policy, defense, etc.

The states, on the other hand, were best at dealing with the problems unique to each state and there were never intended to be restraints placed on any one state. The states were seen as the laboratories of experimentation based on local needs. Each states’ internal problems are unique to each and therefore call for different solutions. It was not the place of the federal government to come up with any “one-side-fits-all” solutions. That concept was anathema to the founders. Their fear of centralized control was extreme.

Now the above does not, at first glance, seem like much of a dent in a nearly $2 Trillion budget pie, but it definitely has a bearing on our on-going debt problem – something too many of our elected officials continue to kick down the road instead of picking up the can and tossing it in the trash once and for all.

But consider that on top of this nearly $400 Billion in (technically speaking) illegal expenditures, add the trio of retirement and healthcare behemoths known as Social Security, Medicare, Medicaid (none of which should fall under federal powers) and suddenly you have the source of our debt problems and the source of our demise in a few more decades.

Have you ever noticed that when the politicians talk about expenditures they speak of “annual” numbers but when they discuss “cuts” they speak only in terms of a ten-year cut. It sounds so much better to talk about $2 Trillion (over ten years) in budget cuts than $200 Billion (annual average). Understand that $200 Billion is only about 5% of the annual federal spending. Not much of a dent if you are seeking a balanced budget. When you are already adding $1 Trillion to the national debt every year, you are falling behind continually.

Consider this: If you didn’t have to fund all those departments that do not belong in the federal budget anyway, the cost of those departments (counting only the discretionary ones above) would approximate the amount of interest applied to the national debt annually. So, if they were removed from the budget, that amount could be applied to pay down the national debt itself on an annual basis.  If that were done consistently, the debt would be paid off in 55 years. But with a shrinking national debt, it would actually be paid off much sooner than that since the principal would be shrinking and reducing the interest owed at the same time. This is something to ask your Senator or Representative about the next time you sit down to have a serious talk about just how much of the federal government is unconstitutional and what it is doing to our grandkids’ future.

Truth be told, sooner or later, the federal budget must be reduced if we are to survive. These unconstitutional departments would be a great place for President Trump to begin the cuts. His current budget does very little to improve things.

Dr. Fredric Eichelman: Yes, Virginia, We Can Be a Red State Again