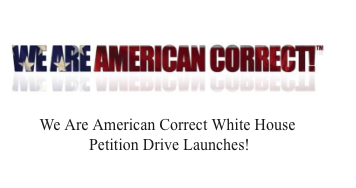 Kevin Fobbs and former PolitiChick Susan Swift, co-hosts of NRN American Exceptionalism show and authors of the newly released book “Shut Yo’ Mouth!” How the Left Plays the Race Card to Silence Conservatives and How to Stop It, launched a national signature petition drive on Wednesday, February 5, 2020.  The “We Are American Correct” petition requests President Donald J. Trump to declare May 21, 2020 “American Correct” Day to push back against the media’s relentless attacks on Americans as “racist” “Deplorables” and “credulous boomer rubes” and affirm Americans’ right to defend life, to bear arms, and to celebrate faith without fear of reprisal. The date coincides with the Christian commemoration of Christ’s Ascension.

The night before the Senate’s historic vote the President heralded the historic comeback of America in his State of the Union speech aptly themed “Keep America Great!” Trump’s address put the lie to democrats’ political propaganda, telling the truth of the conservative political policies and economic forces creating the American comeback. President Trump’s proud proclamation is a great example of being “American Correct.”

Rush Limbaugh, recipient of the Medal of Freedom the nation’s highest civilian honor, said, “We are born to action; and whatever is capable of suggesting and guiding action has power over us from the first.”  President Trump’s acquittal plus record high poll numbers and a booming economy define what it means to be American Correct — unafraid to do what is right and speak the truth when detractors say “Shut Yo’ Mouth”.

Now is the time for all good, liberty-loving, colorblind Americans to support President Trump by pushing back against the D.C. elites and rejecting the leftist media’s bigoted attacks. Sign, distribute and share the We Are American Correct Day petition to reach one hundred thousand signatures over the next 30 days. Buy the book “Shut Yo’ Mouth!” to learn what the Left doesn’t want you to know about their ongoing racist media propaganda. Pro-life, pro Second Amendment, pro free speech, and pro MAGA Trump election efforts all across the country will receive direct monetary support from “Shut Yo’ Mouth!” book sales to help keep America great.

For More Information Contact:  Kevin Fobbs or Susan Swift at:

Daniel Greenfield: Bernie Sanders is as Honest As Every Other Politician

Daniel Greenfield: The Causal Link Between Getting Gonorrhea and Voting for Hillary Clinton May Be Incidental