The truth is sometimes difficult to accept (and sometimes even harder to explain). But I am moved to try.

One of my Facebook acquaintances needed help from a fellow sinner. Several posts in a thread I landed on recently resulted in some back and forth with a number of contributors, but the following post really made me think that this individual really didn’t understand what is going on in America. So I jumped in with both feet in hopes that something I said would stick in his mind…for his benefit, not mine. I will probably never meet him, but maybe I shined a light into the darkness just a little.

I love this country. That’s why I served in the military.

I think it could be a lot better.

If you are Christian- why are you supporting a man who violates every one of the seven deadly sins, Someone who fakes like he is a Christian to get your vote. A man who professes that he hates abortion but is “very pro-choice”. He is a wolf in sheep’s clothing. Every example of what Jesus is NOT. He’s full of pride, boastful, he degraded women and the less fortunate, doesn’t have an emphatic (sic) bone in his body, cheats on all of his wives and boasts about it. A man who constantly lies.

The Bible says, “it is easier for a camel to pass through the eye of a needle, than for a rich man to enter the kingdom of god.”

Do you actually believe, if Jesus were here and an American citizen, that 1- he would be allowed to legally enter the country and 2- would he vote for Trump? Or would he vote for a man who is empathetic, honest, compassionate, wants equal treatment for everyone, wants to heal the sick, and avoid excessive greed?

This was my response:

“I love and served my country, too.  At 72, I find myself with cancer directly caused by exposure to chemicals while serving my country, so playing that card won’t get you a lot of points.

Yes, our country could be better…without at least half of what passes today for a government – given the fact that our constitution specifies only certain things that the federal government is expected to do for us.  All the rest of the things that government has morphed into providing are illegal under our constitution but were permitted by leftist (read socialist) judges that distort the constitution to achieve their destructive ends.

If you are a Christian, how well do you know your Bible? There are numerous instances where God has used sinners to achieve His desired result. Trump is, no doubt, a sinner…LIKE EVERY OTHER INDIVIDUAL on the face of the earth other than Jesus. Who are we to judge or condemn?  Trump’s past has been sketchy and certainly left-wing in some respects, but if you are a believing Christian you know that God is in control and our leaders are ordained by God. Every one of the Democrats and Republicans in office has a role to play in God’s plan. Some serve a positive role while others chasten us and remind us of the evil in the world, but they all serve His purposes.

Had Hillary Clinton won in 2016, this country would have had no future as a free society. She would have made it possible for what Obama started to be finished. Trump force a turn. He awoke a sleeping body of voters to the possibility of restoration and every indication is that the restoration might just include Trump himself. His approach, so far, has been consistent and constitutional…What his behavior was in the past can be (if you claim Christian faith) forgiven. You might need forgiveness someday, too. 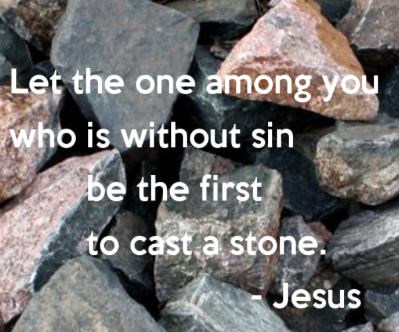 The camel and the eye of the needle illustration does not say it is impossible for a rich man to enter Heaven…it says it is more difficult. Redemption is a major part of Christ’s mission in coming to our world. Are you suggesting that there are people who cannot repent and gain redemption? If so, read some more Bible. It’s in there. Your view of Trump is similar to what the Pharisees were called out by Jesus for doing – standing apart in a prominent place and criticizing the poor lady who gave her last penny to God’s work. “Let him who is without sin, cast the first stone.” comes to mind, as well. We should be rejoicing that Trump has changed his views and his behavior for the better and he certainly has delivered for the poor as well as the rich.

The characteristics for which you think Jesus would vote for are largely fulfilled with Trump, you just don’t hear about many of the good things he has done for people. Much of that blame lies with the media that are controlled by those who would destroy our country and simply hate Trump.  Trump doing good does not fit their narrative. Do some digging and you might find that he has done much for many people but does not brag about it publicly.

His businesses provide thousands of good-paying jobs for people who need them. So, what if he speaks bluntly (Jesus did). So, what if he has sinned in the past (Paul did, David did, among many others that God used). So, what if he is not perfect (even Peter denied God, and God used him, too). We didn’t elect him to be perfect. We elected him to turn our country back around to a constitutional republic of limited government and maximum freedom. So far, given the resistance he is facing, he has done well for that cause.

Self-righteousness appears to be a theme in your comments. With all of the mistakes and sins I have committed in the course of my life, I should not have the slightest inclination to criticize Trump for the things he is alleged to have done.  I, for one, am grateful to a loving God and Jesus Christ for showing me a better way and guiding me from that point forward. What I do know is that God wants everyone to prosper, but God also admonished that those who do not work do not eat. There is an element of personal responsibility that falls on everyone, and there is a profound different between voluntary charity and forced re-distribution through the government. The latter does not qualify anyone for sainthood. It simple keeps you from being jailed. It’s what we do as individuals that matter to Jesus.

I pray you dig deeper and receive some enlightenment because it appears that you have been led astray.”

Oh, yes… I missed one point. In my mind, it is highly unlikely that Jesus would attempt to sneak across our border illegally. It is far more likely that he would come in through one of the many gateways to America through which countless honorable people have entered over the years. The illustration of Jesus as an “illegal” is really pretty ludicrous. When He does come, everyone will know it. Of that I am certain.

(Video) PolitiChicks Discuss Being On Forefront of Citizen Journalism