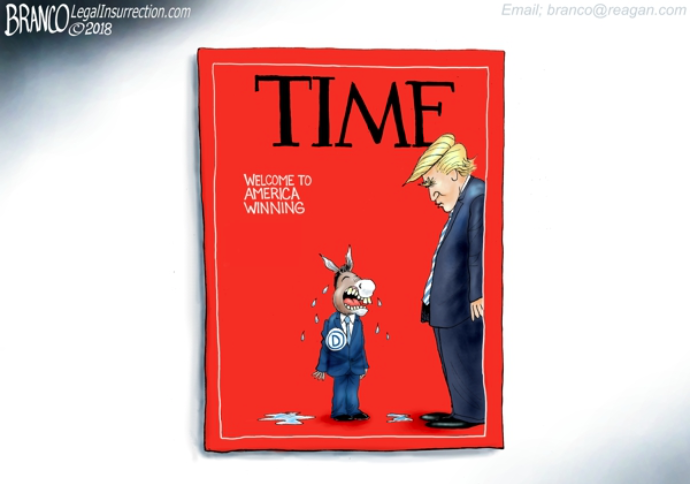 Recently I was heading home from the San Diego airport so I thought I’d stop and browse the airport news stand. Checking magazine covers tells you a lot about the state of our culture and the direction things are going.

First, New York Magazine featured an attractive, smiling photo of Alexandria Ocasio-Cortez. And, while I had zero interest in what they had to say about our country’s most popular thirty-something-former-bartender-socialist in Congress, I’m pretty certain they didn’t criticize her. They, along with their fellow media brethren have pretty much designated AOC the next Senator from New York. The voters actually going to polls is little more than a formality.

On the cover of Time’s “Person of the Year” edition was a grim looking photo of poor Greta Thunberg who, at age 17, is demanding that we Americans completely dismantle our economic and government systems to accommodate her hysterical claim the world will end if we don’t. And, if we refuse, she promises to yell at us till we change our minds.

Time, of course, has celebrated climate hysteria since the movement started — all the way back when they made Al Gore their “Person of the Year” for predicting the end of the world within 10 years.  That was 13 years ago.

Hard to believe that anyone pays $5.99 for Time. There was a time when Time was in the new news business. Now, it’s all old news. Utterly biased, and thoroughly predictable.

But for those whose brains need regular washing, Time is as good a place as most to plug in. Maybe not as good as CNN, but close.

Sad to say that both my father and step-mother spent pretty much their entire careers at Time, Inc. But then, Time has changed with, well, time.

Next to Greta’s scowl on the Person of the Year edition, was the week’s regular edition of Time with the very handsome and thoroughly air-brushed photo of Nancy Pelosi. If you were passing through the airport from another country you could be forgiven for assuming this dignified lady was as distinguished a states-person as her photo made her out to be.

But you’d be dead wrong. I wasn’t going to pay the $6.00 plus 10.5% California sales tax to find out, but I’m pretty sure the article inside was full of Nancy-worship and Trump-bashing. Maybe the only person who hates Trump as much as Nancy is Time Magazine itself. After all, Trump has done more to expose, and repair, the abuse and corruption in Washington DC than all the so-called investigative reporters in the mainstream media combined. Instead of impeachment, Time should nominate Trump for a Pulitzer. Not likely.

I wonder who decides which worthy goes on the cover of magazines like Time anyway. Time chose Pelosi who has done absolutely nothing for most of the last three years except persecute the president, and provide a windfall to whoever makes those gaudy gold pens she so rapturously handed out after signing the order to impeach. Trump, on the other hand, has brought America full employment, a rollicking economy, and at least a hiatus to of all those pesky wars we’d been fighting the previous 15 years or so.

No honorable news stand would be complete these days without several covers featuring glowing pictures of Prince Harry and his lovely bride, Meghan. I actually kind of like Harry. Not only did he land a beautiful and forceful wife, he’s feisty and served his country mostly with distinction (as did his brother.)  Much like his mom, he probably isn’t temperamentally suited to the whole royal thing. And, though pretty and intense, you can be sure his leftist actress wife (who refuses to move back to the U.S. as long as Trump is President) did a fair amount of arm-twisting to cause Harry to relinquish his title, his fortune, and all the other “royal” perks to which he was accustomed.

Last I heard, their new home will be Canada, at least so long as Trump is president. I suggest they buy for the long term. Though maybe they’ll change their minds mid-winter. Last I looked, the temperature was 30 below with blowing snow. And then there’s always the possibility Meagan will decide to take advantage of the record low unemployment among women in the U.S. and move back to Hollywood.

Just as CNN and MSNBC have adopted policies of never covering Trump’s rallies, so too have the news magazines decided to take a pass. The news stand is pretty much all Democrat all the time.  And not just that, they even ignore or white-wash the various power plays coming from within the Democrat Party.

Where are the stories about AOC fighting it out with Pelosi, working to undermine Nancy’s leadership within the Democrat caucus by refusing to contribute the $250,000 to the Democrat Party that is required of Democrat Congress members? AOC says the Democrats Nancy wants to help elect aren’t far left enough. Wow.

Now granted, not every magazine in the country is as liberal as New York and Time. Many are even worse. Over a hundred magazines were on display, and not one featured even a moderate conservative.

Hard to believe, but a great many regular voters out there haven’t tripped to the ideological bias of the media, they read this stuff and they very often believe it. That’s not just sad. It’s frightening.

Daniel Greenfield: Should the Iowa Caucuses Have Been Decided in Mosques?