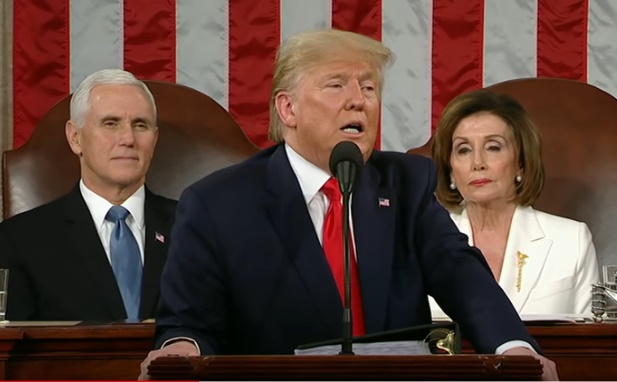 President Trump has delivered his 2020 State of the Union speech. I thought it was a great and brilliant speech for several reasons:

The reaction to this speech by the Democrats was hilarious to watch. Pelosi vacillated between looking she she was going to throw up to smiling and talking to herself (or her imaginary friend). Folks are upset she tore up the speech. I look at that as her being utterly defeated because she can’t handle a prosperous America that Trump has created. She and the Democrats have been trying to undo the 2016 election since BEFORE the election and have failed spectacularly. In fact they have made (and continue to make) Trump’s re-election more likely.

I watched just a moment or two of the post speech analysis and was a bit surprised that the folks at CBS thought it was a good speech. And Van Jones over at CNN was correct to worry that Trump may break the hold Democrats have had on minorities because he has actually done things to help blacks. Gosh what a concept! If Trump were to get anywhere near or over 12% of their vote the Democrats are in serious trouble. A few polls have shown black support of Trump at close to 30%. Even half of that would be devastating.

So It was a great speech that I think will resonate with a lot of people. And compared with the socialist agenda of the major Democrat candidates, Trump looks pretty good in comparison.

Daniel Greenfield: The Causal Link Between Getting Gonorrhea and Voting for Hillary Clinton May Be Incidental