It’s not easy to place a value on a vote, but once you pull the lever, you’re agreeing to pay someone to work for you and for your family. They’re supposed to make life better – for you, your children, your neighbors, and your community. If you’re lucky, they make life better beyond the borders of the district they represent, or the state, or even the country. If they fail, they cost a lot more than their salary.

Still, it’s worth considering the amount we pay them. And whether we’re getting our money’s worth.

It’s relatively easy to add up what they’re paid. A member of Congress receives $174,000 in salary.  They each receive an additional $4,620 in airport parking fees. Round trip air fare between their districts and Washington are also part of the deal. I’ve often seen them in first class as I and most of my fellow travelers make our way back to coach.

And, of coarse, they and their families enjoy all the other taxpayer paid benefits – health care, dental, vision — another approximately $20,000 per year.

Figuring out how much we pay for their benefits and staff is a little harder to discern. Some members get more than others. Some get more furniture, nicer offices, more travel.  The average amount in 2017 was $1,315,523 per House member. The average for a member of the Senate was about 3 times that much: $3,467,971.

Typically, a member of Congress works about 125 days a year.  Their staff picks up most of the load for the other 240 days while the member mostly tries to convince you they’re worthy of re-election. 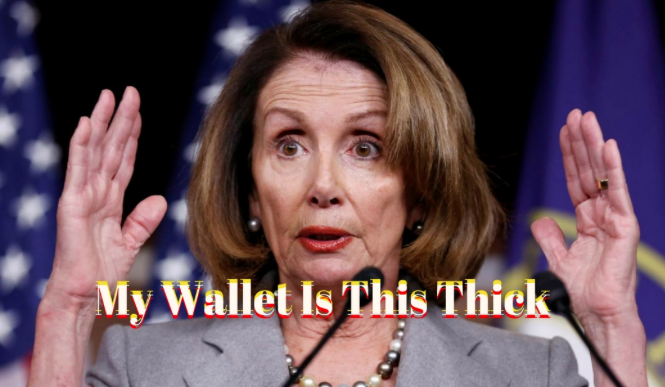 Some members get a lot more.  In addition to her salary, huge staff, and luxurious allowances; Nancy Pelosi also demands the Air Force provide her a private Boeing 757 capable of carrying up to 295 passengers.  Taxpayers also pay to stock her plane with all her favorite food and liquor.  The one way cost of the 757 from DC to San Francisco is about $60,000.

Do you believe you’re getting your money’s worth?

Maxine has been in Congress 27 years which means she’s cost us about $35 million in salary, staff, committee expenses, free mailings, and various other expenses.

Is she worth it? 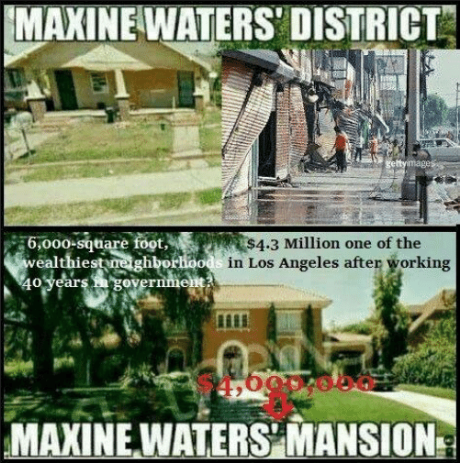 In her 27 years in Congress, Maxine has passed 3 pieces of legislation; one of them to name a post office. She’s been investigated numerous times and named the most corrupt member of Congress three different times. Since she’s been in Congress, her district has deteriorated so much she won’t even live in it.  Instead she lives several miles away in a $3 million mansion.

The main quote most associated with Maxine?  “Impeach 45.” She’s chanted it since Trump’s election night victory in 2016. She almost never appears without repeating it.

She’s also called on audiences to harass and intimidate any Trump staff or supporters wherever their found.

She claims this is why her voters re-elect her. My guess is they’d rather her fight to reduce crime, attack drug trafficking, remove the trash in their neighborhoods, provide better schools, improve the economy, and make it easier for them to start businesses. Sadly, Maxine Waters can’t be bothered with such trivia. She has a president to impeach. 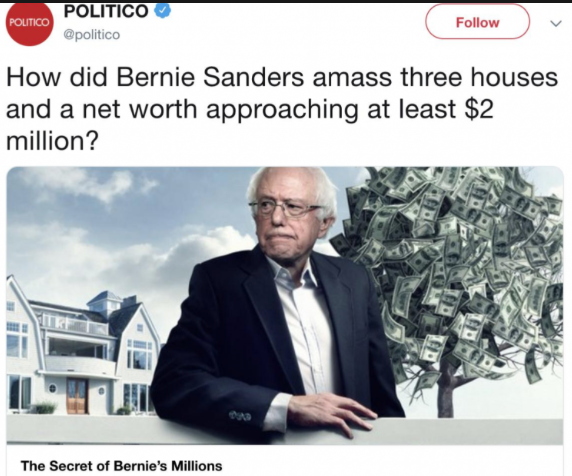 Then there’s Bernie Sanders. He’s been in the Senate for 25 years and has mostly used the past 5 to launch 2 unsuccessful presidential campaigns.

Though this one is not yet over, I call it unsuccessful because while Bernie may win a few Democrat primaries, I don’t believe the American people will elect an septuagenarian who chooses Iran over America, Muslims over Christians, socialism over capitalism, government control over freedom, or political correctness over free speech. I’m convinced the fact he wants to make AOC a senior member of his cabinet is enough to ensure his defeat.

It would be nice if someone running for a higher office, was required to give up the office they are already in. That would assure fewer people hopscotching from one office to another, making a life long career of politics. But Bernie would never do that.

For one thing, he’d never be able to find another job should he retire from public office.  He’s never worked in the private sector. He’s never held a job taxpayers didn’t fund.

For another thing, Bernie needs the limelight his membership in the Senate confers. He loves the benefits. He loves the staff, and offices, and power.

Between Maxine “Mad Max” Waters and crazy “Feel the Bern” Sanders, taxpayers have paid more than $80 million. Seems to me that money could have been better spent.

Ultimately, it’s our fault. We elect men and women like Bernie and Maxine with every election. We deserve them. We’ll continue to do so till we come to our senses and start paying more attention to who we elect, what they believe, and how they can hurt us.

And about how much they cost? I’m not just talking about the $80 million plus we’ve spent on Bernie and Maxine. I’m talking about the loss of freedom, hope, and opportunity we, our children, and the generations to come experience when progressives grow government at the expense of individual liberty.